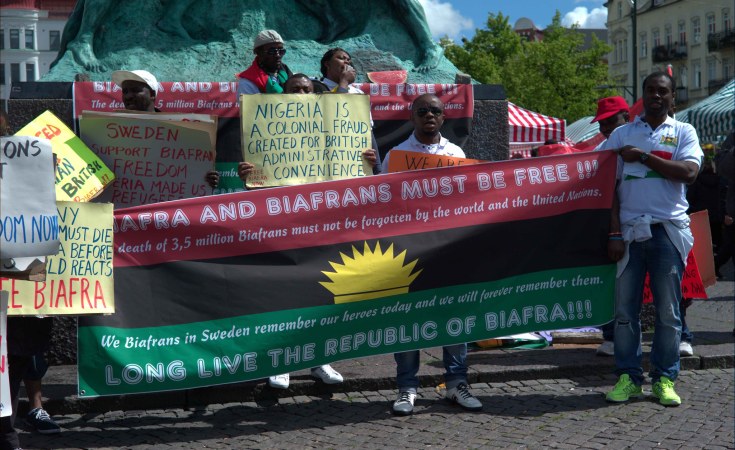 The police said at least 21 personnel were killed in three months in Imo State.

Nigerian security forces have committed a catalogue of human rights violations and crimes under international law in their response to spiralling violence in Southeast Nigeria, carrying out a repressive campaign since January which has included sweeping mass arrests, excessive and unlawful force, and torture and other ill-treatment, said Amnesty International.

Nigeria's government has responded with a heavy hand to killings and violence widely attributed to the armed group calling itself Eastern Security Network (ESN), the armed wing of the Indigenous People of Biafra (IPOB), a pro-Biafra movement. According to government officials, the ESN killed dozens of security operatives and attacked at least ten public buildings, including prisons and police stations, from January to June. In response, security forces comprising military, police, and Department of State Services (DSS) have killed dozens of gunmen, as well as civilians, where attacks have been committed.

Eyewitnesses told Amnesty International that the security forces have engaged in excessive use of force, physical abuse, secret detentions, extortion, burning of houses, theft, and extrajudicial executions of suspects. Human rights groups estimated that the death toll of violence between January and June 2021 in Anambra, Imo, Abia, and Ebonyi states might run into the hundreds. The police said ESN fighters killed 21 of its personnel in Imo State alone.

Amnesty International carried out an extensive investigation to document the human rights violations and crimes under international law in Anambra, Imo, Ebonyi and Abia states from January 2021. The organization documented 52 incidents of unlawful killings and 62 cases of arbitrary arrest, ill-treatment and torture. Media reports, video and audio recordings reviewed show that the Nigerian security forces also employed excessive force and other unlawful means to address the rising violence.

From January 2021, gunmen suspected to be ESN militants launched a series of attacks on government infrastructure, including prisons and public buildings, killing several police officers. Amnesty International condemned these attacks and called on authorities to bring the perpetrators to justice.

Nigerian security forces launched security operations in June, primarily targeting ESN militants or those perceived as such to decimate the group.

For instance, in two of the cases documented by Amnesty international, the victims were targeted with no apparent justification:

Uguchi Unachukwu, a Germany-based businessman was killed by soldiers on May 31, at a checkpoint near Owerri airport on his way out of the country. The police are yet to investigate the crime.

Mathew Opara, a 45-year-old businessman, was shot by soldiers on May 25, 2021, in Orji, near Owerri. Witnesses told Amnesty International that he was returning from work when he ran into a team of soldiers in armoured vehicle and Hilux vans shooting at residents. He was shot in the chest and could not receive immediate medical help because of the violence. His family said the military acknowledged the killing but did not launch an investigation or offer any apology.

Unlawful and arbitrary arrests and ill-treatment

In May 2021, the Imo State Government announced the arrest of at least 400 people allegedly linked to the violence. Amnesty International's investigation indicates that most of them were randomly picked up in their homes and off the street and had nothing to do with ESN. Some victims told Amnesty international that they were arrested while walking in the street, at a public bar or simply for having birth marks or tattoos on their body.

A 37-year-old man who was arrested by the police at Orji, in Imo State, on May 26, 2021 told Amnesty International that he was arrested because his colleague had a birth mark on his shoulder. The police said the mark was a sign of membership of IPOB. "The police arrested us on the road. They asked us to lie down on the road. They checked our clothes to see if we have tattoo. I had none but one of us had a birth mark. He tried to explain but the policemen started beating him. They tied our hands backwards and took us in their van to the police station," he said.

Another 36-year-old man told Amnesty International: "I was arrested on my way back from work. The policemen put me in a bus along with other young men including several students and an NYSC member in his uniform. They labelled us ESN members and took us to their station at the Fire Service. We were severely beaten. They said they will waste [kill] all of us. I told them that I work for the state government. I was asked to pay N20,000. I negotiated and finally paid N15,000. They allowed me to go at about 10.30 p.m. I do not know what happened to the other people."

On July 23, soldiers from the 82 Divisional headquarters of the Nigeria Army, Enugu, invaded Akpawfu, Amagunze and Akpugo communities in Enugu State and arrested at least 20 residents after gunmen killed five soldiers and burnt their vehicle near the community days earlier. Eyewitnesses told Amnesty International that dozens of soldiers moved from house to house, arresting youth on suspicion that they had links with ESN militants.

"What is needed is an impartial and open inquiry to determine what happened and bring to justice all those suspected of criminal responsibility in fair trials before ordinary civilian courts and without recourse to death penalty," said Osai Ojigho.

Since 2016, Amnesty International has documented violations of the rights to life, freedom of assembly and freedom from torture, and arbitrary arrests and detentions of suspected members of the IPOB. Most IPOB gatherings documented by Amnesty International were largely peaceful. In those cases, where there were pockets of violence, it was mostly in reaction to shooting by the security forces. Violence erupted in January 2021 after IPOB announced the formation of an armed wing, The Eastern Security Network(ESN), ostensibly to fight against armed herders, allegedly responsible for hundreds of deaths across Nigeria. The government blamed the group for the killing of security personnel in the region. Nnamdi Kanu, the leader of IPOB, who earlier jumped bail, was recently rearrested in Kenya after several years on the run and is currently facing treason charges in Nigeria.