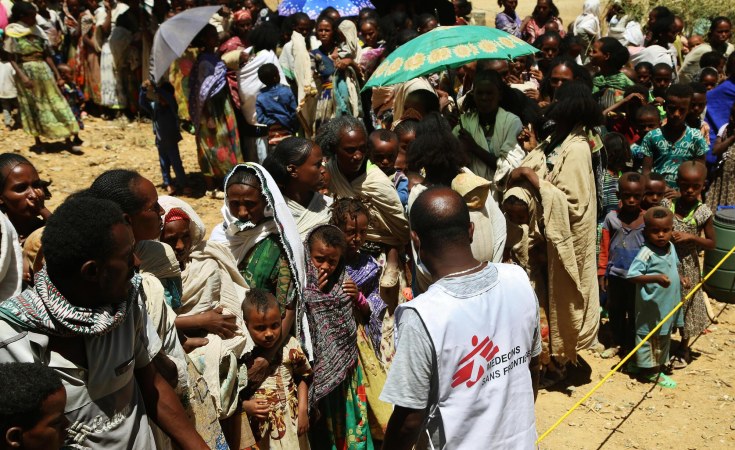 Addis Abeba — USAID administrator Samantha Power finalized a day-long trip to Ethiopia without an audience with Prime Minister Abiy Ahmed. She however used her short visit to reiterate her earlier calls for dialogue and cessation of hostilities to end the nine months conflict in Tigray, the start of which on November 04 last year she commemorated as "a grim day".

"Today is also a grim day. It marks nine months since the start of the conflict in Tigray, amidst an alarming humanitarian catastrophe where 5.2 million people remain in a state of dire need," while adding, "We now estimate that there are roughly 76,000 internally displaced persons in Afar and 150,000 internally displaced persons in Amhara after TPLF military expansion into neighboring regions."

The top Biden official has also called for the protection of humanitarian workers, and raised her concern at what she described as "dehumanizing rhetoric."

"I raised my concerns about inflamed and dehumanizing rhetoric... , but also increasingly virulent speech that you find on the internet and in various publications directed at aid workers. And already, we have seen horrific attacks against aid workers who are doing nothing more than trying to provide food and other forms of assistance to people in desperate need. So dehumanizing rhetoric of the kind that you referred to only hardens tensions and can, and historically, certainly, often accompanies ethnically-motivated atrocities."

Her concern resonated with the message on July 30 by the the Special Adviser of the United Nations (UN) Secretary-General on the Prevention of Genocide, Alice Wairimu Nderitu in which she expressed her utmost concern over the "use of pejorative and dehumanizing languages like "cancer", "devil", "weed" and "bud" to refer to the Tigray conflict."

Administrator Power visited a local warehouse for USAID's food aid outside Addis Abeba. She also held discussions with both the Minister of Peace, Muferiat Kamil, and the Minister of Health Lia Tadesse.

Clarifying the US' position and responding to claims made by top Ethiopian officials that there was an intention of a "regime change" on the part of the United States, Ms Power said "Whether the United States is lobbying one government to release political prisoners, or another government to allow greater access to humanitarian aid workers, I want the Ethiopian people to know that we seek to engage with you and with your government on the basis of a set of values, not to play favorites or to pick sides during a conflict."

"Values like, there is no military solution to an internal conflict", [or] "values like, all parties should end hostilities and agree to an immediate ceasefire, and to begin talks about reconciliation and troop and militia withdrawal from neighboring regions," are the position of the US government, she said, and categorically dismissed claims made by top officials in the federal government about attempts at a regime change as "false".

With regard to her discussion with the Minister of Peace, Ms Power said she has called yet again for a cessation of hostilities and unfettered humanitarian access into Tigray region among other things.

"The United States has called for dialogue and a cessation of hostilities, and when the rhetoric gets ratcheted up, it also just becomes more and more challenging to come to the table," Ms Power said, "irrespective of the intentions behind that rhetoric -- and that's a question that I would urge you to direct to people who are using that rhetoric." It is "evident all around the world, including the United States, irrespective of what one intends, there are many, many people out there who hear rhetoric, hateful rhetoric or dehumanizing rhetoric and take things into their own hands or can be incited by that."

She expressed her hopes that "the goal that I hope we all share is peace. And words matter. And it's extremely important that all parties involved in the conflict come to the table and move away from what is an increasingly ratcheted up set of accusations and counter accusations and focus instead on the dialogue that is going to be needed for an inclusive peace and an end to the suffering of civilians."

Responding to repeated allegations on the relationship between the United States and the Tigray People's Liberation Front (TPLF), Ms Power asserted that "the United States has made it very clear to the TPLF leadership that a ceasefire and political negotiations are the only way to end this conflict."

A trip to Tigray was not possible due to the nature of the trip, as is a meeting with PM Abiy Ahmed, which she expressed regret. The Ministry of Foreign Affairs (MoFA) in today's briefing did not address the matter and referenced the talks held between the Minister of Peace and USAID chief.

Ms Power ended her remarks by emphasizing on the importance of protecting aid workers, and urging all parties to the conflict to refrain from the use languages which escalate conflicts, and focus on safeguarding civilian lives. AS