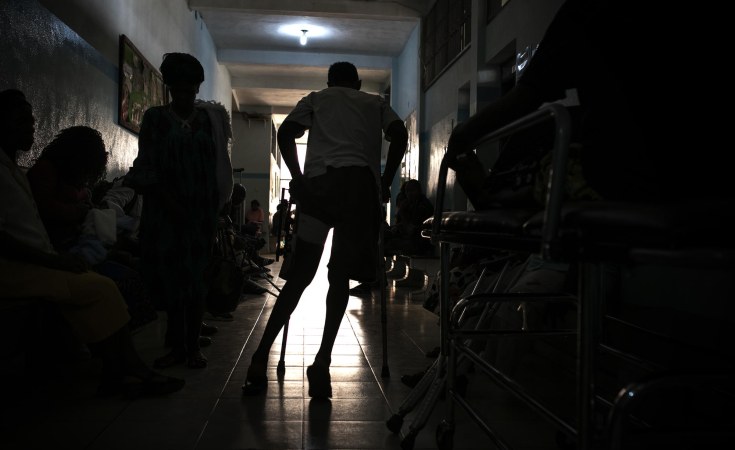 Albert Masias/MSF
A patient leaves Saint Mary Soledad’s outpatient consultation corridor in Bamenda - each year, thousands of patients benefited from our support in a region where access to care has been reduced by armed violence. North-West region, Cameroon, March 2020.
Medecins Sans Frontieres (Geneva)

While armed violence and violations of human rights have made the headlines in the past years, the impact of this crisis on people’s basic medical needs has often been overlooked in the international media. However, according to the latest UN figures, the flare up of violence in the anglophone regions of Cameroon has pushed more than 700,000 people to flee their homes, while over 60,000 have fled to neighbouring Nigeria. Today, people’s living conditions are massively affected by the crisis, and over 1.4 million people are considered in need of humanitarian support in North-West and South-West Cameroon.

“Access to healthcare services is of major concern in the North-West and South-West regions”, says Lampaert. “Because of insecurity, lockdowns, curfews and the targeting of health facilities, access to healthcare is extremely limited, with at least one in five facilities non-functioning.”

“Displaced people barely dare to move to health facilities, and the economic downturn has made it still harder to travel to hospital, or even to afford treatment,” continues Lampaert. “Unsurprisingly, mortality among vulnerable groups such as women and children has increased, and the suspension of our medical support has made the situation even worse.”

While our teams have treated patients for rape, torture, burns and gunshots, the vast majority of patients have been those in need of medical assistance for childbirth, malaria or diarrhoea, especially in displaced communities. Last year, MSF-supported community health workers conducted over 150,000 consultations for communities in both regions.

Insecurity and restriction of humanitarian space

The support provided by MSF and other humanitarian organisations proved to be all the more vital, as insecurity and attacks on staff have limited the number of organisations present on the ground to provide lifesaving services.

“We are one of the few medical organisations present in those two regions to respond to people’s emergency medical needs, in a very challenging context,” says Lampaert. “Since we started our activities, our medical staff, volunteers and patients have regularly faced threats and violence from both state and non-state armed groups, with very little respect shown for the humanitarian principles of impartiality and neutrality.”

“Our ambulances have been fired on and stolen, community health workers have faced sexual assault and murder, armed men have opened fire inside medical facilities, and our colleagues have faced death threats,” says Lampaert. “Despite these extremely difficult situations, our staff kept on providing care to people in need, day after day.”

Present in many countries where government forces and non-state armed groups clash, MSF is committed to our charter which requires the provision of healthcare without discrimination or heed to political or religious affiliations, race or gender.