South Africa: How a Film Is Fighting the Erasure of South African Activist Dulcie September 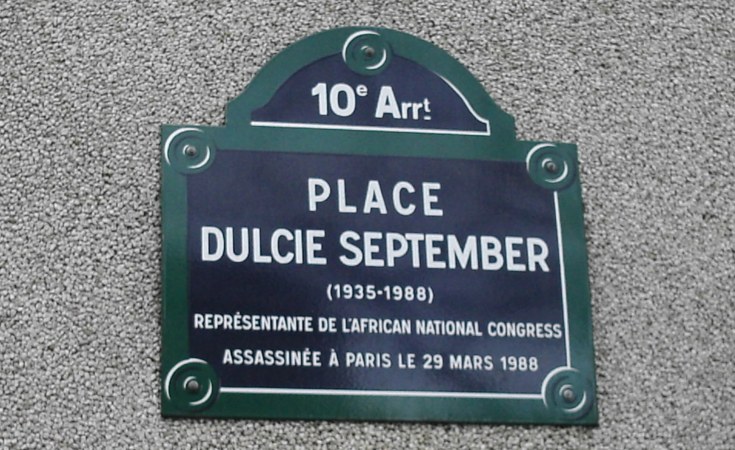 Film impact involves designing and implementing strategies to ensure a social justice film reaches the right audience so it has the best chance to bring about the desired change. Social change takes many forms, from creating awareness and changing perception to behaviour and policy change.

South Africa, like any country, has a unique set of characteristics that influence how films reach audiences. That's why it's so important to document and share case studies of local impact campaigns that cater to the South African context, audiences, challenges and opportunities.

With this in mind, I hosted a panel discussion about the impact campaign of Murder in Paris at the Encounters documentary festival recently. The event was supported by the University of Cape Town and Sunshine Cinema's Film Screening Impact Facilitator course.

Murder in Paris tells of the 1988 assassination of Dulcie September, an anti-apartheid activist jailed by the South African government who later left the country. In exile she worked for the resistance, the African National Congress (ANC), becoming its chief representative in France, Switzerland and Luxembourg.

The fast-paced documentary reveals the ongoing attempts by her family and a journalist to find justice, revisiting and interrogating the cold case. Most recently it shared the Best South African Documentary Award at the Durban International Film Festival. Director Enver Michael Samuel also won the festival's Human Rights Award.

The panel discussion with Samuel and the film's impact producer Miki Redelinghuys covered the film's impact goals and some of the tough distribution decisions they've had to make to reach the right audiences to try and bring about awareness and change.

What were the impact goals for the film?

Miki Redelinghuys: The low hanging fruit of any impact is awareness. It's also the first impact goal in this campaign, but we're calling that "the erasure". Secondly, a big driver is "justice for Dulcie". Thirdly, addressing family trauma. So very clear, very simple impact goals ... We were guided by a quote from academics Kelly-Eve Koopman and Rasmus Bitsch:

The cost of erasing Dulcie September and others like her is not only the billions that could have been spent on a society in dire need. It is also the opportunity to accurately understand the past in order to improve the future. And, of course, justice.

Enver Samuel: I knew there was going to be something strategic that needed to be in place because it wasn't going to be that the broadcast stage was the be all and end all ... The documentary had to take on another life after the broadcast, which it is actually doing at the moment.

This erasure of Dulcie September is ongoing ... When you tell people about (her) generally - if you're not within ANC circles - the question is: 'Dulcie what? Dulcie, who is that?' Then when you explain, it's: 'Oh my, why didn't I know about this person?' So, I think we are contributing to un-erasing the name of Dulcie September.

Miki Redelinghuys: Key to this process has been building a community. Liezl Vermeulen, the co-impact producer on this project, has been working hard on building a community alongside Enver, from 2018 already. Reaching out to people, gathering names. Gradually placing the story out there, getting people to interact on social media, subscribing to a newsletter. Our #RememberDulcieSeptember campaign, to be implemented by doing screenings and a school campaign, rolls out in August, which is women's month and also Dulcie's birthday month. And then "say her name" making Dulcie visible in public spaces; a public art campaign; and actively driving for key landmarks to be named in recognition of Dulcie.

Can you tell us more about the justice for Dulcie aspect of the campaign?

Enver Samuel: It's become one of our pinnacle goals. It's 33 years later and the family are still suffering the anguish of not knowing (who killed Dulcie)... The Truth and Reconciliation Commission failed them. The French courts failed them. So, they have recently (started an) initiative to get the case reopened. And I'm pleased to say that their French lawyers have said they'll introduce the documentary as part of the evidence submission to get it reopened.

How did the trauma you observed while making the film drive the social justice work?

Enver Samuel: When that window is open for you as an observer, making a documentary, you start to realise the pain and the anguish of the families ... the bodies are bent, the language, the voice, you know. I guess that is in some ways my driving motivation to try and tell these stories.

Miki Redelinghuys: That motivation drives the third goal in the impact campaign, #MerciDulcie (Thank you Dulcie) which is about using the film to address family trauma, to open dialogues ... to revisit this unresolved pain. Not that we, for one minute, think the film can offer resolution. But I think there's a certain healing in recognition and dialogue.

Why was it important to prioritise screenings on the public broadcaster in South Africa?

Enver Samuel: That's where you get the bums on seats. For me, that's always been the main mission. I've done it with the three documentaries I've just made. If you're making these types of documentaries, the more people that see it the better, because that's contributing to the un-erasure.

So, I pushed with SABC3 to also get the documentary shown on a significant day, Human Rights Day ... The second part (was broadcast) one day before the 33rd anniversary of Dulcie's assassination. Going this way has borne some fruit because the documentary made the top 15 of the audience ratings for SABC3 (in the month it was broadcast). That jeopardised my film festival chances, because it can't be entered into official competition. So that's something filmmakers must keep in mind. But for me that wasn't a reason to (not) roll it out.

How are your distribution plans for Europe different?

Enver Samuel: France is clamouring to watch the documentary. I mean, Dulcie was there for five years. If you look at the archive footage during her funeral you would think that it was a funeral for a rock star. Currently we are re-cutting the documentary for a European audience ... We arranged for a travelling exhibition on Dulcie September's life to come to the Nelson Mandela Foundation (when French president Macron was on a state visit to South Africa). The CEO took President Macron on a tour. And ... he knew who Dulcie September was. He knew that she had been assassinated there, and, he uttered - for us - the immortal words: "We will look into it." The French lawyers are over the moon by this.

Miki Redelinghuys: That was a big moment for us and we continue to build on that ... And as Enver mentioned earlier, that part of the campaign is actually making it into the international version of the edit as well. So the two are constantly connecting: the film and the campaign itself.