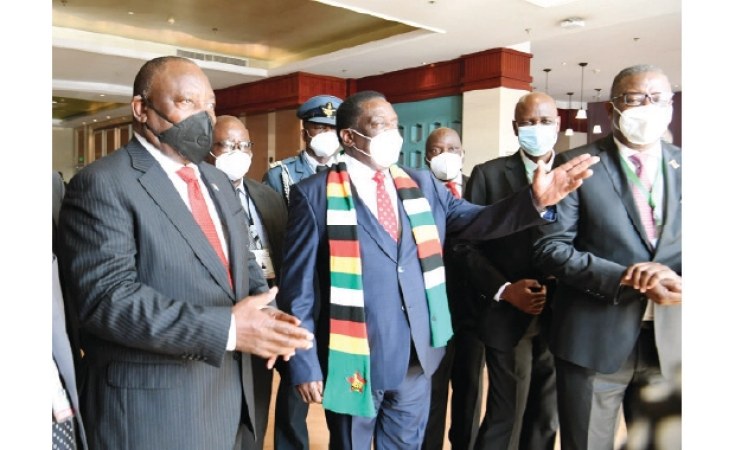 The Malawi leader was speaking at the annual summit of the 16-member Southern African Development Community in Malawi's capital, Lilongwe.

Speaking during the televised function Tuesday, Chakwera, who is also SADC's current chairperson, said it was concerning that, despite the devastating social and economic impact of the COVID-19, wealthy nations continue hoarding vaccine.

Statistics show that less than 2% of Africa's population is fully vaccinated. That is low compared with the rest of the world.

Chakwera blamed it on inequalities and disparities in the distribution and production of COVID-19 vaccine.

He said it is symptomatic of an old geopolitical framework that regards some human lives as more worthy of saving than others.

"Our message to those countries that perpetuate and promote those frameworks is simple, 'You are using a failed and tired formula'. African countries are full members of the global community, period," Chakwera said. "As such for the sake of human dignities everywhere, we as African have a moral duty to refuse to be treated as second-class citizens."

Chakwera said that thinking would make it difficult for the region to reach herd immunity and reduce high infection rates.

Dr. Vera Songwe is executive secretary of the United Nations Economic Commission for Africa. She said the Africa Vaccines Acquisition Task Team, put together by South African President Cyril Ramaphosa, has procured 400 million doses of the Johnson & Johnson COVID-19 vaccine for the continent.

"We also need to produce on the continent," Songwe said. "SADC region is demonstrating its capacity do that by starting in South Africa with production of vaccines in South Africa. This is for us, as a continent I think, a first demonstration that Africa coming together can effectively [go] forward better sustainably in the crisis."

The summit also aims to promote regional trade and building a regional defense force after its first deployment to fight insurgents in Mozambique's Cabo Delgado province.

Speaking through a translator, Mozambican President Filipe Nyusi thanked the SADC for authorizing the deployment.

"We congratulate countries of the region for the brotherhood and prompt solidarity demonstrated by the deployment of SADC standby force capabilities in the spirit of SADC Mutual Defense Pact which as launched on the 9th August 2021 in Pemba city," Nyusi said.

Nyusi said he would speak more on the issue during a closed-door session.

The summit is expected to end Wednesday when a communiqué on resolutions will be read.