Cameroon: No Legs, but Still Standing and Swinging 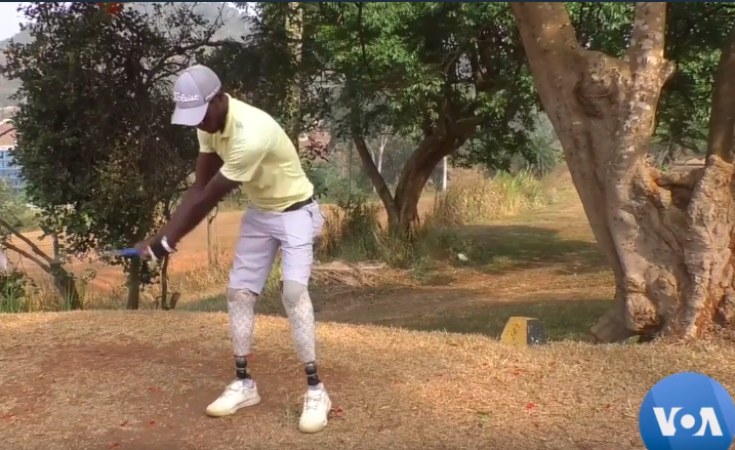 VOA
Cameroonian champion golfer Issa Nlareb Amang lost his legs and most of his fingers to meningitis in 2018, but through donors he was able to get prosthetics that allowed him to return to the game.
New Frame (Johannesburg)
By Daniel Ekonde

Issa Amang had both his legs amputated after falling ill in 2018, but that did not stop him. With the help of prosthetics, he is back up and not only playing golf but winning.

A bacterial meningitis infection might have taken Issa Nlareb Amang's legs, but it did not stop him from making huge strides in golf. The 30-year-old Cameroonian, who has his sights on representing Africa at the 2024 Paralympics in Paris, was on an upward trajectory when he was forced to have his legs amputated.

Amang dominated golf in Cameroon between 2015 and 2018, gaining admission into the Alps Tour. But a few weeks after winning the event in Senegal, he became ill and was diagnosed with bacterial meningitis. He then fell into septic shock. He was rushed to a hospital where doctors treated him for three weeks. Amang eventually returned to Yaoundé, his hometown, for further assessment. He ended up going to Belgium, and it was there that his legs were amputated.

He had been participating at the Ein Bay Open in Suez, Egypt, when this happened.

"I was very broken," Amang says. "My game was really on top level during this period. The quality of my swing was really there. But when this happened in Egypt, I was just thinking, 'Why now? Why this moment?' I could not answer these questions because I did not know what happened. But I was still confident because I know everything I practise in my life, I put my all. I knew I had not lost it [golf], I knew it was going to be a matter of time for me to bounce back."

The father of one stayed in Belgium for three months, during which he received financial support from Cameroon's golf federation, friends and non-governmental organisations to pay his medical bills and other expenses. "That period was not easy. Nobody knew if I would walk again, but I kept praying to God for everything to go well," he says.

But Amang's iron will to rise again could not be doubted. Even in his sick bed in Egypt, many of his colleagues saw his resolve. One of them was the executive and operations director of the Alps Tour, Estelle Richards, who said, "We know that Issa will try everything to play again. He is very strong mentally and I can say that when I saw him in Egypt, where I was in charge of the tournament, he fought with all his strength to survive the septic shock."

Amang returned to the golf course with prosthetic limbs, mentoring and introducing young golfers to the sport in Cameroon. "I worked with them when they were preparing for a tournament in Equatorial Guinea. I knew they would perform better," he says.

"But they played very badly. They had bad scores. I was very angry and I asked myself, 'How could they play like that?' And I said, 'Even me, without legs and some fingers, I can play better than them.' So I said I will play with them in the tournament next year. I started practising and improving my game and, fortunately, it worked."

Amang has played seven professional tournaments since then and won three - in Gabon in March, Uganda in September and Cameroon in December - in 2020. Amang's incredible comeback is no surprise to Nigeria's No. 1 ranked golfer, Andrew Oche Udoh.

"When we were in the Uganda Open, he stole the show after day one, with top-ranked African players present in that event. A man with no legs and just a few fingers leading the Ugandan Open, which is a very prestigious event in African golf? It goes a long way to tell you about the spirit and conviction that guy can actually put in your mind. The high-level mentality he has put in his career [has] taught me a lesson."

The player's biggest challenge was returning to Egypt. "It was very tough," says Amang, who went back to the Sokhna Golf Club in Suez where he fell ill and got septic shock. "I was freaking out. I asked myself, 'Why did it happen at that time? Why me?' But I was happy because I did not die. I could still do many things. It was just a matter of time to recover."

Amang, who has earned the nickname Bioman, taken from a Japanese television series character who is half human and half robot, played the Alps Tour again there. As a third-division player in Europe, Amang is targeting the 2024 Paralympics in France. He has been to the country several times for training.

"The problem now is finance. I don't have any sponsors. It is very expensive at the moment," says Amang.

The outbreak of the Covid-19 pandemic and the collapse of the West African Golf Tour that Amang won in the 2017 series brought the sport to its knees in West and Central Africa. It means athletes who can't afford to travel outside the region to play either the Safari Tour in East Africa or the Sunshine Tour in southern Africa or the Mena Tour in North Africa can't earn any more than the stipends they get from winning home events or low-key tournaments elsewhere in the region.

Samba Niang, a Senegalese golfer who has played the sport professionally since 2008, says golf is not taking off in West and Central Africa because of those in charge. "For most of our unions [federations] there is no plan, no goal set to develop the game. If you don't have a goal and a clear plan, the sport cannot go forward. On the government's side, there is no incentive to develop the sport, even though it is a booster to tourism, not only from the sport's side but from the economic side."

"If kids growing up don't have role models they can look up to, they might never take on the game. Tiger Woods did that for a lot of Black people in the [United] States. Also, Africa doesn't have a lot of representatives in the PGA tour or the European tour that kids can look up to."

He continued, "Some countries in Africa like Kenya, South Africa and Morocco have understood [how to improve the sport]. In Morocco, the king actually passed a law that stipulates that there cannot be any major real estate without a golf course inside. In 30 to 40 years from now, Morocco is going to be one of the leading places of golf in Africa."

Amid tournament drought, Amang has kept active. "I teach children, amateurs and parents. That's the way I enjoy my life at the moment," he says.