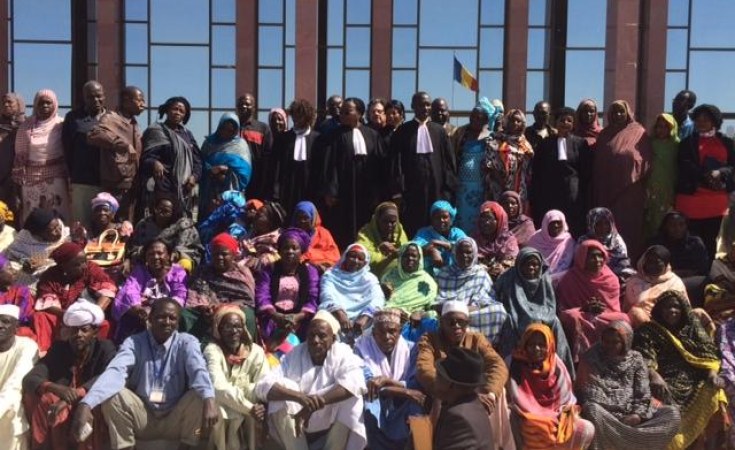 Prior to Chadian ex-president Hissène Habré's death on Tuesday, nothing was moving on the reparations for victims ordered after he was convicted. The seizure of his assets in Senegal has never taken place and the African Union has not set up a planned fund. But now civil parties are remobilizing, as if stirred to action by events, and hoping Habré's death will be the catalyst in the victims' last struggle.

The death of the "Lion of Chad" has rekindled the burning question of reparations for his victims. Hissène Habré's 2015 trial of before the Extraordinary African Chambers (EAC) in Dakar, where he had gone into exile, was seen as a model of justice and a relief for Chadians. Justice was done by an African court conducted by Africans in Africa. And in a rare event, a former head of state was sentenced - to life imprisonment - outside his country for serious violations perpetrated against his own population, after a trial in which victims' voices were central.

But their satisfaction was soon tinged with bitterness, as there was no sign of the substantial financial compensation that the EAC granted them. The special court in Dakar ordered Habré to pay no less than 82,290 billion CFA francs (124 million euros) to 7,396 civil parties. Aware that Habré's assets would not be enough, the judges delegated the implementation of the reparations to a "Victims' Compensation Fund" to be managed by the African Union - the institution that set up the EAC after a 2012 agreement with Senegal.

Habré's villa seized but not sold

More than four years after the reparations decision, the fund exists only on paper. The court ruling confirmed that two bank accounts and a villa in Dakar belonging to the former president had already been confiscated during the investigation of his case. Surprisingly, this property (a land title of 1,336 m2, according to the judgment) has still not been put up for sale.

Even more surprisingly, the civil parties did not request the execution of this part of the EAC's judgment. The High Court in Dakar was designated by the EAC to hear any matters arising after the EAC's dissolution. A Senegalese magistrate who wished not to be named said he was surprised by the lawyers' inaction: "I don't understand. Legally, there was nothing to prevent action. It was possible to request the sale of the property and place the money in escrow if still waiting for the activation of the Fund."

"No request has been filed in the Senegalese courts," Yaré Fall, former Senegalese lawyer for two Chadian victims' organizations before the EAC confirmed to Justice Info. His colleague Assane Dioma Ndiaye, who represented a third Chadian organization in Senegal, also confirmed this. He said that the issue was raised during an "informal discussion" between civil parties. Ndiaye cites "strained" relations between the Chadian organizations as a reason for the inaction, but Fall doesn't think the approach is relevant. "The value of his house in Cité Africa and his few frozen bank accounts is derisory and would be of no use to the victims," he says, given the amount of compensation ordered.

Reed Brody, former legal advisor to Human Rights Watch during the trial, disagrees. The villa, located in the chic Dakar neighborhood of Ouakam, has been valued, he said: "The value of the building was estimated at the time at about 445,400,000 million CFA francs (680,000 euros), and then there are the two bank accounts, the amount of which was not specified." For Brody, there is no doubt this money could be a good start for the Fund. The American lawyer does not explain why no action has been taken.

Brody says he learned of Habré's death just as he was holding a conference call with victims' lawyers on how to speed up the reparations process. "Habré's death won't change anything," he says, "except that I hope it will draw attention to the plight of the victims. It was through their actions that two historic things were done. A dictator was tried. And this is the first time in history that victims mobilized to get a dictator tried in a country other than their own. You could say they did the work of international justice."

300 victims dead since end of trial

Clément Abaïfouta, a victim who was arrested by Habré's political police in 1985 and forced to work as a gravedigger during his detention, recalls a visit to Dakar by Jacqueline Moudeïna, the Chadian lawyer for the civil parties, after the verdict, to meet with the judicial authorities. "Nothing concrete came of it," he says. "Several demonstrations were organized in N'Djamena to demand the establishment of the Fund."

Abaïfouta, who is also president of the Association of Victims of the Crimes of the Habré Regime, went to Addis Abeba himself with Brody to raise awareness of the AU heads of State. But nothing concrete came out of it. The AU is dragging its feet and the victims are "slowly dying," laments the survivor. He says his organization has recorded the deaths of more than 300 victims since the end of the trial. "There is a real lack of will on the part of the Senegalese judicial authorities, the Chadian political authorities and the AU," he concludes. "Habré was a former head of state, and the African heads of state club is casting its shadow over us."

Moudeina also thinks the AU's inaction stems from this. "We had problems for more than 20 years in trying to get Habré's trial," she says. "These people [heads of state] did not want to try Habré, and their stonewalling continues for reparations. For me, this inaction is support for Habré and for impunity." Moudeina believes that "the Fund should be set up and a conference organized to raise funds and make an appeal so donors can contribute." Habré's death, she adds, caught them by surprise as they were doing strategic planning. "We will wait a couple of weeks and come back with an action plan," she says.

Abaïfouta, who fought for two decades for the Habré trial to take place, is not one to be discouraged. "I say to myself, where has our joy gone? When we knew that Africa was judging an African dictator, everyone rejoiced... and then everyone forgot about that. Now I think that Habré's death should be a catalyst, and should speed things up. It's not an end, it's a beginning."