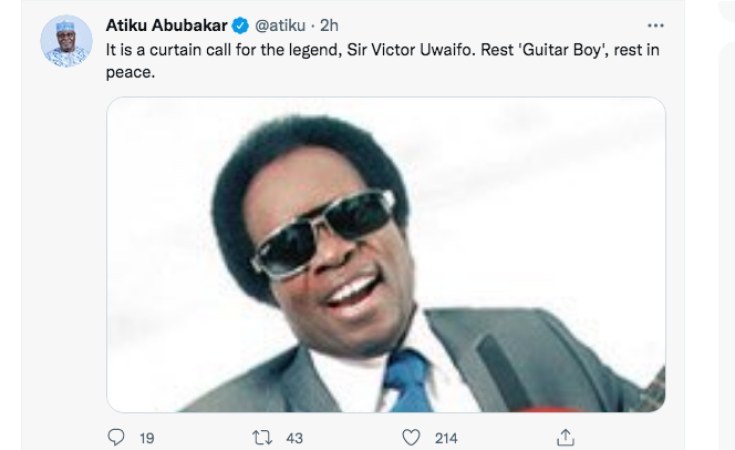 One of his children, Peter Uwaifo, broke the news of the death of the professor of visual arts at University of Benin on Saturday.

The legend, who moved from his decades-old music career to take up appointment as a lecturer at the prestigious university in Edo state, died on August 28, 2021, six months after celebrating his 80th birthday.

He is renowned for his versatility in manipulating musical instruments, including proficiency in playing the electric guitar, flute, saxophone, electric piano, percussion and vocals at the same time.

Uwaifo won the first gold disc in Africa from his album "Joromi", which was released in 1965. He had seven other gold discs in "Guitar boy", "Arabade", "Ekassa" and "Akwete".

He recorded under the label Victor Uwaifo and His Titibitis.

Recognised as the most educated performing music legend in Nigeria, Uwaifo had a first class bachelor's degree, a master's degree and a PhD in architectural sculpture.

The Federal Government of Nigeria, in appreciation of his talents and contributions to the country, honoured him with a National Honours Merit in 1983.

In his condolence message on Saturday in Abuja, President Muhammadu Buhari noted that Uwaifo has left a legacy of successes in many areas of life, including the academia and administration.

He noted the glory that Uwaifo brought to Nigeria through his international tours "and the active role he played in national development, returning to school to get a first degree at age 54 with first class honours, master's degree at 56 and a doctorate at 77".

Mr Tony Okoroji, the chairman of the Copyright Society of Nigeria, said Uwaifo was one of the best sculptors Nigeria ever had.

Okoroji said that Uwaifo was "so full of life" the last time he saw him, describing his death as shocking.

He said the singer was a super intellectual with a series of talents as he lived as a musician, sculptor, author and an administrator.

"Uwaifo's death is shocking for me, I saw him recently and he was so full of life. In fact, we spoke a week ago. I don't know where this came from. Nigeria will never have another Victor Uwaifo again, he was one of a kind, super intellectual, multi-talented," mourned Okoroji.

Governor Godwin Obaseki of Edo, Uwaifo's home state , expressed shock and sadness over the singer's death, noting it is "a loss to Edo, Nigeria and the black race".

"I received the news of the loss of legendary musician and art teacher, Prof Victor Uwaifo, with shock and sadness. He was talented, phenomenal and an illustrious son of Edo State who wowed the world with his array of skills, notably his music talent.

"An all-round artist, Prof Uwaifo was an enigma, who made music for all, bringing the contemporary Benin culture to the world stage and providing vicarious experience of the peculiarities of our art and culture to a global audience."