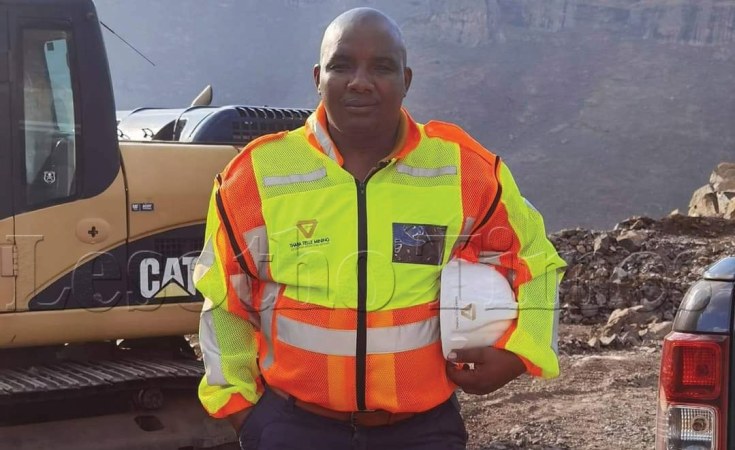 Chief executive officer (CEO), Lehlohonolo Nthontho, this week told the Lesotho Times that Thaba Telle was awarded a 10-year mining lease to mine the Khubelu kimberlite pipe in Mokhotlong.

The company has three shareholders namely Lehakoe Diamonds with 60 percent shareholding, the government with 25 percent and 15 percent held by Thaba Telle Minerals, which is controlled by South African investors.

The Khubelu Mine was officially opened last Friday by Deputy Prime Minister Mathibeli Mokhothu, who was accompanied by among others, Mining minister Serialong Qoo for the sod-turning ceremony.

Mr Nthontho told the Lesotho Times that he was excited to get an opportunity to be part of the country's mining sector.

"This is an exciting feeling for me and has been a result hard work amid many challenges," Mr Nthontho said.

"We are looking forward to this exciting journey, which will give us an opportunity contribute to the country's economic development through employment and taxes like other big locally owned businesses."

He said he was confident that the M60 million which they are planning to inject into the first development phase of the project will soon bear fruit.

The mine is expecting to employ 100 people in the first phase, which will last for a year before embarking on the expansive second phase. At least 600 will be employed in the second phase.

"We are currently setting up the mine plant ahead of commencing commercial production in the next three to four months. What we are doing now involves constructing access roads, water supply systems and accommodation facilities as part of the necessary infrastructure to facilitate production.

"We plan to invest M60 million in the first development phase of the project."

On his part, Mr Mokhothu expressed delight that the mine was locally owned.

"What I like about this mine is that it is owned by a Mosotho who comes from the Mokhotlong district. This is significant because we are used to getting complaints that Mokhotlong people are not playing a significant role in the mining of their diamonds.

"Hopefully this mine will end those complaints as Mr Nthontho is from the district and is the first Mosotho to get a mining lease as opposed to the usual awarding of licences to companies from outside the country," Mr Mokhothu said.

Meanwhile, Mr Qoo said three more new diamond mines would be opened before the end of the year.

The Khubelu mine brings the number of Lesotho mines to five. The other four are Letšeng, Kao, Mothae and Liqhobong mines.