Uganda: Some of the Victims of the Masaka Killings 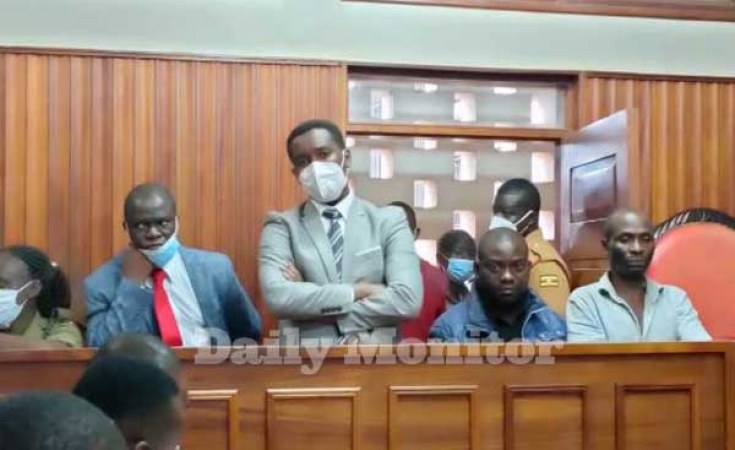 On July 28, James Ddamulira, 47, a resident of Kitanga Village, Kabonera Sub-county, Masaka District, was trailed by assailants, who killed him two days to his introduction ceremony.

On August 25, Fred Ssemanda, 25 a resident of Kituntu Village, was killed between Kintuntu and Bukulula villages in Sembabule District. Ssemanda was a herder in that village and after killing him, the assailants tied his arms with a rope.

On July 3, Edward Bbale, 41 a resident of Kityaza Village, Sembabule, District was killed by unknown assailants.

On August 17, Ibrahim Ssebwana, 50, a resident of Byangiri Village, Lwengo District, was killed when assailants armed with pangas raided his home.

On August 15, Sowedi Kayemba, 35 a resident of Kayembe Village, Kyazanga Town Council, Lwengo District, was killed by machete-wielding thugs, who found him inside his house.

On July 31, Godfrey Kaweesi, 40 a resident of Nakatete Village, Kisekka Sub-county, Lwengo District, was killed by assailants armed with pangas and iron bars.

On July 27, Kassim Kaweesi, 50, a resident of Kyanaganzi Village, Kiwangala Sub-county, Lwengo District, was killed by thugs armed with machetes.

On August 8, Peter Bwanika, 52, a resident of Kisekka 'B' Village, Busubi Parish, Kisekka Sub-county in Lwengo District, was killed on his way back home at around 9pm, after having supper from his mother's place. His body was found buried in a coffee plantation near his home.

On August 24, 2021, three people were hacked to death, including Sulaiman Kakooza, 56, Tadeo Kiyimba, 50, both residents of Ssetaala Village, and Kizza Nswa, a resident of Senya Village in Masaka City.

This Honourable House and in deed the country, have been alarmed by what has been happening in The Greater Masaka Sub-region, and I am here to report to the House about that matter and the measures being taken by government to deal with it.

I want to ask with your permission, Rt Hon Speaker, that we stand in a minute of silence, in honour of those who have lost their lives in these incidents.

Rampant killings have taken place in Lwengo District, and also some in Masaka District from the months of June to date, where the country has lost 26 people as follows:

On July 5, at around 22.00hrs, at Kenangasi Village, Kiseka Sub-county, Lwengo District, one Kaweesi Kasiim, male adult aged 50 years, was murdered by unknown thugs. (One Ssekandi Qurais was arrested to help in investigations. Ref: CRB/KWG/009/2021).

On July 21, at around 21.00hrs in Togo Village, Nkoni Sub-county, Lwengo District, a one John Kabanda, male adult, aged 60 years, and a one Vicent Kalya 43 years old, were all murdered by the same thugs at the same time. (The following suspects were arrested: Muhammed Ssewakombo and John Bosco Kibirango undergoing court process Ref: CRB/NKN/032/2021).

On July 31 , at around 21.50hrs, in Nakateete Villoge, Kiseka Sub-county, Lwengo District, one Francis Nkaka, male adult aged 60 years and Koweesi Godfrey, male adult aged 40 years, were also murdered by unknown assailants. (No arrest so far made but intelligence on ground tracing for the suspects. Ref: CRB/KNN/062/202).

On August 1, at around 20.00hrs, near Katindo Trading Centre, Ndagwe Sub-county, Lwengo District, One Mugenyi, male adult, aged 35years, was murdered by unknown people. (One Kiseka Siraje ond Ssewaje Derrick were arested to help in the investigations. Ref: CRB/NDG/071/2021).

On August 1, at around 22.00hrs, at Kiseka 'B' Village, Kiseka Sub-county, Lwengo District, one Bwanika Joseph, male, adult aged 50 years was murdered by unknown people. (No arrest was made but intelligence is on ground to trace for the suspects. Ref: CRB/LWG/203/2021).

On August 4, at around 20.00hrs, at Katoma- Kyanjovu Village, Lwengo Rural Sub-county, Lwengo District, one Dumba Joseph Lutankoma, male adult, 59 years was murdered by unknown assailants. (One Namato Justine was arrested to help in the investigations. Ref: CRB/LWG/203/2021).

On August 12 in Malongo village, Malongo Sub-county, Lwengo District, one Lubega Ramathan, male adult 60 years, was found murdered and his body dumped in a kibanja of a one Faizo.

On August 15 at Mpumude village, Byakabirizi Parish, Kyazanga rural sub-county, Lwengo District, a one Kayemba Sowedi, male, 29 years, was waylaid by unknown assailants and murdered. His body was found dumped on Kowesi Road in the same village.

(3) Paul Galiwango, male adult, 58 years, all residents of the same area. Two suspects have been arested to help in investigations, and found with some exhibits of the victims, clothes with blood stains and some tools suspected to have been used in the murder. The suspects are Musa Kaganda Tumwesigye, male 26 years and Henry Kabayo, male adult, 30 years. All are residents of the same area.

On August 18, at around 20:00hrs in Ndegeyo village, Nakatete Parish, Kiseka Sub-county, Lwengo District, a one Godfrey Kato Ssemwanga, male adult, 45 years, a resident of the some area, was waylaid, hit and injured with multiple injuries on the head by unidentified assailants, who were hiding in a eucalyptus plantation in the same area.

The victim was evacuated by the relatives to the nearest health facility in Kinoni Town Council.

On the night of August 22, in Kikunhwe A village, Butale Parish, Kimanya Kabonera Division, a one Idirisa Mukasa, 80 years, was murdered in front of his house.

Assailants also killed three people on the night of August 23 in Swtala Village, Senya ward, Kimanya, Kabonera Division, Masaka. They were hit and died instantly. The deceased include:

3. Tamukuze Kiyimba, 42 years, all residents of the same area, though murdered from different spots.

On the night of August 27, in Kisaka village, Kiteredde Ward, Kimanya, Kabonero Division, Masaka City, unknown assailants killed a one Madi Mulindwa, aged 45 years and injured a one Ssemanda.

On the night of August 28, in Bwasa Village, Kosano Parish, Kingo Sub-county, Lwengo District, a one Joyce Kankundiye, 70 years, and her granddaughter aged 6 years, were hit and later pronounced dead at Masaka Regional Referral Hospital.

On the night of August 28, a one Nakato, aged 80 years, a resident of Kitenga Village, Kadugara ward, Nyendo-Mukungwe Division, Masaka City, was killed by unknown assailants.

There have been reported incidents of dropping anonymous letters in the districts of Rakai and Bukomansimbi within the months of July and August. The following are the occurrences:

On July 3, in Rakai District, in areas of Kabingo Village, Luanda Sub-county. This letter was demanding money from Charles Mugarura in the village, threating that failure to pay, he may lose his life or his children. His house was touched on August 4, but the fire was put out by the community.

The suspect known as Charles Mwebe, was arrested and he confessed that he was threatening his uncle to pay bride price for him.

On August 5, at Misanvo Trading Centre, on a boda boda stage next to the police post, in Kibinge Sub-county, Bukomansimbi District, the letter was dropped threatening police and demanding guns from them, purportedly to start an armed rebellion. In the said letters, 14 young people earmarked for recruitment into rebellion are named. These were approached and interrogated by security, but were not arrested.

The murders are not motivated by proprietary gain since nothing is taken from the victims. However, criminals in some few incidences use phones of victims, to communicate to the relatives of the victims. Whatever the motive, the intended effect is to cause fear, terror and apprehension in the public.

They use the same killing method of hitting the victims on the head with blunt objects. The killings are also indiscriminate.

The pattern of killing is also similar, i.e timings are mostly between 20:00hrs and 22:00Hrs at night, by waylaying the victims and, or attacking vulnerable people in houses.

They use motorcycles and foot, to move and this was testified by some survivors.

Below are the actions taken:

(1) Apprehending a number of suspects, whose cases are being processed for prosecution.

(3) Suspension and checking motorcycles and motor vehicles moving at night for any suspected individuals.

(5) Foundation security mobilisation formation of security committees in the affected communities and reinforcement of the police with additional boots on the ground.

(6) Reinforcement with canine and other technical capabilities.

(2) Four suspects were arrested and these are James Gingo, Ssemanda Daudi, Mawanda Muso and Henry Kiganda, who were all remanded to prison.

Need for provision of adequate logistics to intensify the operations within Masaka, Lwengo, Rakai and Bukomansimbi districts in order to arrest the culprits and have them prosecuted.

Regular mobilisation meetings by security teams, with locals as a way of instilling confidence in the communities and also enhancing information collection.

Dedication of Specialised investigation teams from Kampala to handle case management properly and ensure those arrested are successfully prosecuted.

Reorganisation of foundation security within the communities with all the critical strands of timely intelligence, coordination, communication and rapid reaction.

Senior security leaders have been tasked by the National Security Council to go to the affected areas an on spot assessment and to work out on effective plan of action with the area district security agencies in order to decisively deal with this insecurity, bring the culprits to book, and return normalcy to the affected areas/ communities. This reprehensible, immoral approach of killing Ugandans is shallow and untenable and will be defeated.

Deployment of additional security personnel to dominate the affected areas has been effected in order to restore communal confidence and prevent escalation of the problem.

Rt Hon Speaker, Honourable members, I will also propose to Cabinet, that government organises some compassionate assistance to those families that have lost loved ones or had their people injured.