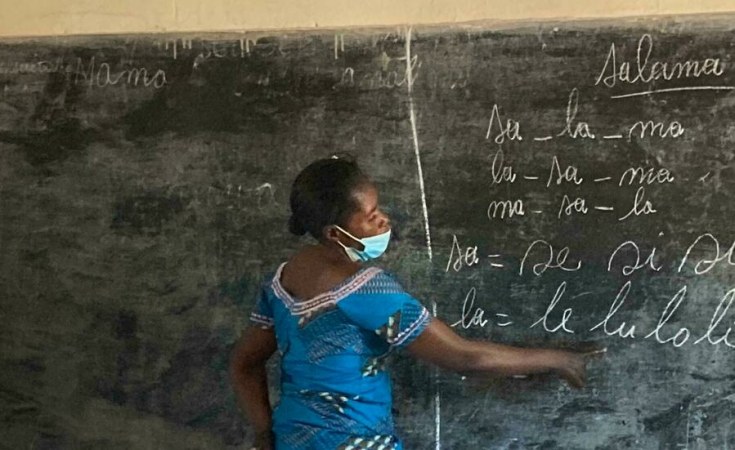 Everyone in class at the Alfajiri Institute in Kabalo is looking intently at Eugenie Luna, their teacher, who writes the word "Salama" on the well-worn chalkboard.

"Salama," explains Luna in Swahili, "is what Tanzanians say to each other as a form of greeting. It means 'peace', like the word amani."

"Sa-la-ma. These are the syllables. Repeat after me."

The class, a group of twenty colorfully dressed women, responds in a loud chorus. They're not typical students, which perhaps is made obvious by their enthusiasm. These are female farmers in the eastern Democratic Republic of Congo, between the ages of 35 to 55, who until now had lived their lives without knowing how to read or write.

"When I first started, my kids said, 'no, no, what can you tell us about this class you are doing at an old age? We don't care about what you're doing there and please don't talk to us about this thing,'" says Josephine Belima, 46, farmer and mother of six.

Her children's comments are just an example of some of the resistance the women have faced--from their own families--about wanting to learn how to read and write.

The classes, organized by Action Against Deterioration, a local non-governmental organization in coordination with the World Food Programme, teach basic reading and writing skills with life lessons and practical instruction.

"The first thing that I liked about the themes that they talked to us about in class is how to live in the house and how to live in peace with each other," says Belima.

"My children are rough--if one of the kids touches them, they go straight into a fight. Following the classes and topics we've explored, I'm able to understand them and show them how to live well with each other," she adds.

In Kabalo, a small town in the Congolese region of Tanganyika, girls never went to school at all, according to Veronique Kassongo Yohari, 47, also a student. An estimated 80 percent of women there are illiterate.

The nine-month program, which began in April, is directed at women volunteers from the local farming associations. Those who wanted to learn reading and writing in Swahili, as well as simple math calculations could sign up. The response was overwhelming-- currently, some 2,000 women attend class three days a week.

Literacy instructor Lucy Mamba Masomo says that her students' enthusiasm has not waned since the beginning of classes, either--the only absences are from women who give birth or get sick, but they return to class as soon as they are able.

"After class, some women regroup in the neighborhood to talk about what they learned that day," she says, "but no homework. They have too much to do in the house!" she laughs.

Married with five children, Fikiri Chomba, 40, says she couldn't read anything, "not even a paper that fell on the floor-- but today I'm able to start reading a letter, I can read a little bit, which helps," she says.

Fellow student Yohari, a widow with nine children, no longer needs to rely on literate neighbors to read letters addressed to her.

"I'm happy to know what a one or two looks like. I never knew this before. I now know how to write 'mama' (mom), 'baba' (dad), I know the alphabet, a, b, and m, thanks to this class, because it had never occurred to me," she says.

In the school system here in Kabalo, classes are taught in Congolese Swahili for first and second grade, then instruction switches to French for grade three upwards. Yohari says she can follow what her youngest two children are learning.

"I'm already starting to see and see what they do. I am reading whatever they are reading. But the kids studying in French, I'm not able to understand what they are doing," she says.

She wanted all her children to get an education, but she was unable to afford the school fees for all nine, especially after she was widowed seven years ago.

After attending school for a few years, "my three oldest sacrificed themselves so that the others can also go to school," she says.

It all adds up

One aspect that has helped all the women, no matter what their age, is the ability to do simple addition and subtraction. All are farmers and regularly sell their sweet potatoes, cabbage and other vegetables at market.

Yohari says that learning how to calculate in order to give correct change has made a difference, because she didn't know what amount of change to give before.

"If they gave me 3000F (1.25 euros) to buy my sweet potatoes, I would struggle, and many times I gave the wrong amount, so I gave more to the person who was buying-- so many times I had a loss," she says.

Learning how to add and subtract is only one part of their mathematics lesson--the women learn how to budget and save money, too.

Saving money was a new concept for farmer Belima, who thought she had to spend all her money at the market as soon as she had some. "I didn't have any knowledge about putting aside money," she says.

Belima says her lessons have given her much more confidence at home, something her family has noticed, too, giving an example.

"One day, my husband came home from the fields and I served a meal to him and our children. He was very surprised when he found out that I was saving, because he had not given me any money for food," she says, speaking animatedly.

The changes in how she budgets money and food were part of the weekly literacy and math lessons. His response?

"'I never thought that you would be able to achieve something like this. I was even thinking of finding a woman who was better, but you're very useful,' he told me," crossing her arms, and looking sternly.

Ultimately, however, applying her learning in her home has brought Belima and her family closer together. Part of the female farmer literacy program includes holding couples group discussions about polygamy, having numerous children just because your grandfather did this, as well as respect and love in the marriage.

"Even after the wife has completed giving birth to children, it is important that he sticks with the same woman," says Belima, adding that her husband liked the conversations.

"Women are underestimated, that's even how they see themselves," says Marie Ngoy Kisula, coordinator for Action Against Deterioration NGO. The training helps the women, but also the men, who see their spouses in a new light, she says.

The women are enjoying their reading, writing and arithmetic classes, maintaining that knowing how to read and write has boosted their confidence.

And for Belima, she says she feels much more appreciated by her husband and children--she has even seen an improvement in the way they speak to her, and each other.

"I've been telling them about good manners-- when someone talks you should listen," she says.

"They feel that school has made me a different person, a new person, and everything I'm telling them and advising them is useful to my family," she adds.