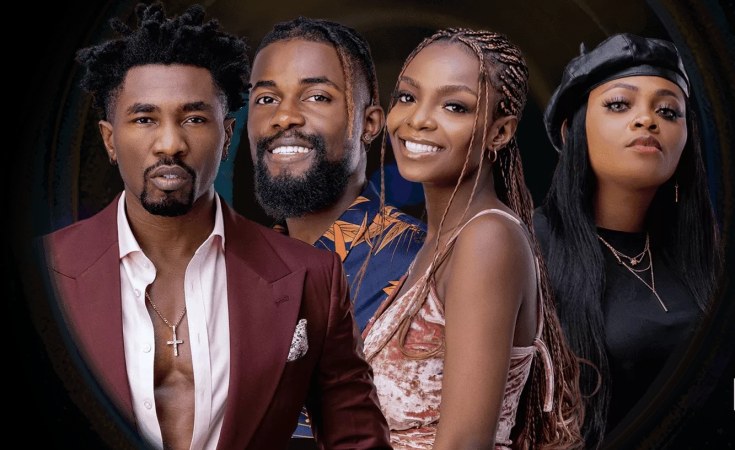 The first quadruple Eviction show just saw the Housemates reduced to half of their original number, tieh Tega, Michael, Peace and Boma being Evicted.

Sunday Live Eviction Shows just keep getting more intense! After last week’s triple Eviction, tonight’s show turned up the tension with a grand total of four Evictions, meaning the complement of Housemates has dropped from 17 to 13 – an unlucky number, for people who are impressed by that sort of thing.

Before we get to the Evicted Housemates, let’s take a moment to reflect on how jam-packed the Live Eviction Shows have become with musical talent: tonight’s show saw performances from Ayra Starr and Rema, each of them treating us to a mash up performance of their better-known tracks, courtesy of Pepsi.

The Housemates don’t get to hear those performances, though, so it’s not like they can have their minds taken off the main purpose of the evening, the Evictions. When the time came for Ebuka to name the first Housemate who had to pack bags, he wasted none of it, and called on Tega. Boma’s reaction was undeniable despair.

During her earlier Diary Session, Tega said that she felt she had achieved some of her goals, but she didn’t really want to go into details. “Biggie, is it a must that we talk about it?” When she didn’t get a response, there was nervous laughter, followed by “I intended to be cool with everybody, which I am.” It was not the most illuminating of Diary Sessions.

Speaking to Ebuka, she said she missed her husband, and the rest of the family. She also said that she would miss Boma, because “he’s my friend.” Right.

When Ebuka returned to the anxious Housemates, it was to Evict two of them: Michael and Peace. When Michael’s name was announced, we wonder if he saw the irony in being given a strike an hour before being Evicted from the House? At least he’s not going to have to suffer the punishment alongside Saga.

Reflecting on his time in the House during his Diary Session, Michael sad that he had experienced some character development, “being able to actually function in a sane manner without having my private space.” Sane? You punched a hole in a wall, dude…

Speaking to Ebuka about his relationship with Jackie B, he said, “we’re still figuring stuff out,” but that he would like to explore their connection outside the House, “for sure!” About the future, she said he’s going to continue pursuing his music career.

During her Diary Session, Peace said that the only goal she set for herself was “not to be the first or second person Evicted.” Well, congratulations, Peace. You achieved that goal.

“To be honest, I was ready for anything,” she said to Ebuka. When pressed by Ebuka on her relationship with Michael, she said “he was my friend.  I was like that with everyone. They’re amazing people.” Regarding what’s next, she said she would invest in her brand, but she’s going to go for anything that comes along like acting or music.

Ebuka’s last foray into the House was to Evict Boma. Speaking to Biggie earlier today, Boma said that he never really expected to make it into the House, “so I didn’t set any goals.” When asked if he had any regrets, he referred to his outburst with Angel and said “there are some things I said that I know are going to be misjudged. I probably should have done better; I should have gone back.” Well, he’s not going to have that chance, now. On the upside, it didn’t take long for him to be reunited with Tega, so there’s that.

“I know myself,” he said to Ebuka, “and I was trying not to be stuck with anyone.” When being pushed by Ebuka, who asked him if he and Tega are “more than cool”, he answered “no”, definitively.  Sure.

So ends Week 6 in Big Brother’s House – from a total of 26 Housemates, exactly half of them are left; each one of them will begin to realise that their own odds of winning have gone up, and that they are in the Game with a real chance of winning the Grand Prize. Play time’s over – it’s time to play the Game, to think, to strategise. It’s time, basically, to Shine Ya Eye.

For more information on this exciting new season, keep an eye on the website and follow our official Big Brother Naija social media pages on Instagram and Facebook. Be a part of the conversation by using the hashtag #BBNaija. Watch Big Brother Naija on DStv channel 198 and GOtv channel 29. Proudly brought to you by headline sponsor Abeg, and associate sponsor Patricia. You don’t want to miss out on any of the action so sign up on DStv or get GOtv Max.