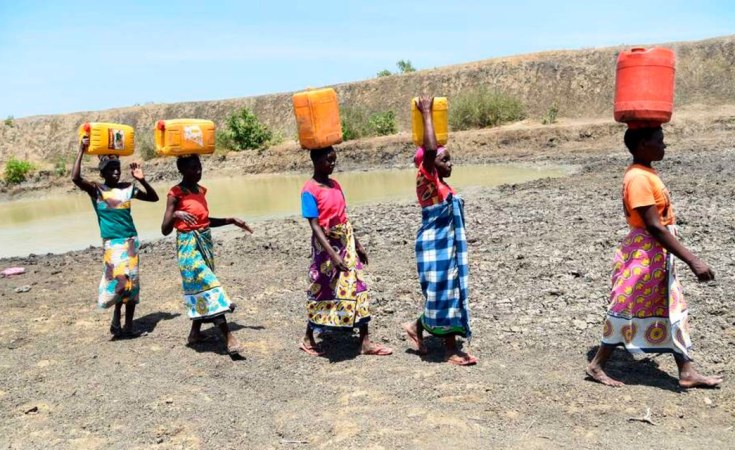 More than 400,000 people at the Coast are in dire need of food, with four out of the region's six counties requiring urgent interventions, authorities have said.

A number of boarding schools in Tana River County have already been closed due to lack of water as humanitarian organisations warn of a dire situation ahead if urgent measures are not taken.

The Cabinet is set to meet tomorrow to discuss measures to help starving Kenyans.

Agriculture Cabinet Secretary Peter Munya said some of the measures the government is considering is buying livestock from pastoralists and cash transfers.

"The government through the National Development Implementation and Communication Cabinet Committee (NDICC) will come up with a plan to cushion livestock keepers. The State will buy livestock from people in drought-stricken areas so that they won't incur losses when the animals die," said Mr Munya.

According to the Kenya Red Cross, Kilifi is leading at the Coast in the number of those facing famine followed by Kwale, Tana River and Lamu.

"We have more than 145,000 people who are in dire need of water and food in Kilifi and about 130,000 in Kwale while 78,000 people are in Tana River. 21,000 people living in Lamu are facing the same situation," said Coast Kenya Red Cross Coordinator Hassan Musa.

In Kilifi, a woman is said to have died in Ganze Constituency a week ago.

Area MP Teddy Mwambire said the woman succumbed to hunger in Goshi Village on the outskirts of Bamba Ward. He called on both the national and county governments to move with speed and save lives.

In Lamu, at least Sh100 million is urgently required to address the effects of drought, the County Steering Group on Food Security (CSG) has said.

County Commissioner Irungu Macharia said farmers got poor yields after rains failed for the past one year.

Invasion of locusts complicated the situation since the little food grown along river banks was wiped by locust-- leaving locals with empty granaries.

"Water sources have dried up and the little remaining are being shared between people and wildlife," he said.

While unveiling a report prepared by the CSG, Mr Macharia said more than 50 per cent of households in the county are lacking food, with Lamu East being worst-hit.

This year Lamu received 83mm of rainfall, way below the long-term average of 284mm.

According to National Drought Management Authority Tana River Coordinator Abdi Musa, at least 2,000 children under five are suffering from malnutrition.

Tana North Sub-county did not witness any of the short rains hence dry water reservoirs, with Kone and Asa areas in Tana Delta bearing the brunt of the drought.

In Tana River, Assa, Wayu, Titila, Idi and Odoganda primary schools have been closed as result of drought as children are forced to embark on long trips in search of water.

"Everywhere is dry. We can go for even three months without water before the county government water bowser responds, and it's always one truck for the school and the residents to share," said Assa Head Teacher Harrison Mwaringa.

Lesson plans have become hard to execute, as teachers are drawn to the hustle for water.

Deputy Head Teacher Cecilia Jilo said despite having food supplies from the government, there is no water to cook the food since the water pans they depended on dried up.

The long and tedious trips in search of water, she said, leave both teachers and pupils fatigued, hence poor performance.

"You can't get any good results with this kind of life. By the time the lessons begin, everyone is tired. We only motivate one another but we need help," she said.

The deputy head teacher revealed that the disruption by the drought has exposed girls to defilement and early marriages.

She noted that the many who have dropped out of school are unlikely to return and will certainly end up married to elderly men in the community as their families seek to survive the hard economic times.

Critical services at different dispensaries in the county, such as maternity, have also been suspended due to lack of water.

Ms Halima Ishmael, a Tana Delta resident, told the Nation that taking baths has been banned in her home, with the little water available reserved for cooking and drinking.

Tana Delta Deputy County Commissioner William Nasongo confirmed that the situation is dire as he appealed for urgent intervention.

"Whatever I have seen these people go through is sad, but I am hopeful that government will respond very soon," he said.