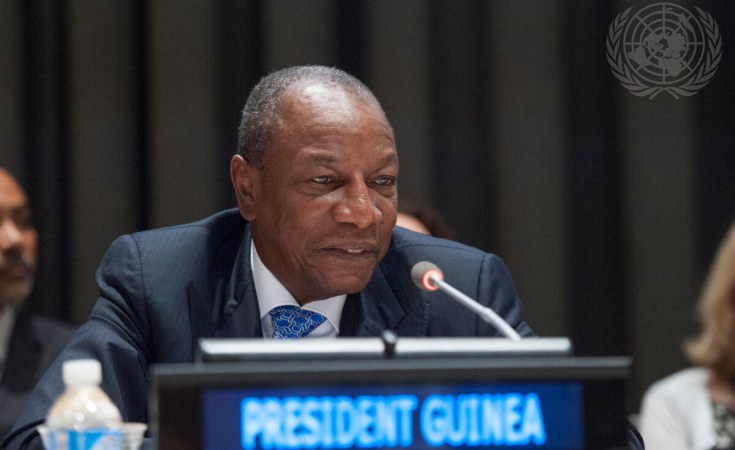 Cia Pak / UN Photo
Alpha Condé, President of the Republic of Guinea, addresses the high-level segment of the International Ebola Recovery Conference at the United Nations in July, 2015.
Voice of America (Washington, DC)

Washington — The military leaders who seized power and dissolved Guinea's National Assembly said Monday they would set up a transitional government.

The details of the promised transition were not immediately clear, but they followed widespread condemnation of the coup from the international community.

In a speech the day after his men declared on national television that they had arrested the president and dissolved the country's constitution, Army Colonel Mamady Doumbouya promised a "government of national union."

He also stated that there would be no "witch hunt" of the government officials he dismissed during the takeover and replaced with regional military commanders.

Doumbouya hoped to calm concerns about economic upheaval, promising that Guinea would "uphold all its undertakings (and) mining agreements," stressing "its commitment to give favorable treatment to foreign investment in the country."

Mining accounts for roughly 35% of GDP in Guinea, whose citizens rarely reap the benefits of the country's mineral wealth because of corruption and lack of infrastructure.

A video emerged hours into the apparent takeover that showed Guinean President Alpha Conde in a room surrounded by special forces soldiers. Members of the military who referred to themselves as the National Rally and Development Committee (CNRD) later issued a statement saying the 83-year-old Conde was not harmed and was in contact with his doctors.

In October, Conde won a third term in office after amending the constitution to allow him to run again. The controversial election sparked violent protests throughout the country.

Fighting was reported earlier Sunday in the capital, Conakry, but following the announcement of the takeover, many people celebrated in the streets for what they believed to be a successful coup.

A statement issued Sunday by the U.S. State Department condemned the coup, warning that the "extra-constitutional measures will only erode Guinea's prospects for peace, stability, and prosperity" and limit the ability of the United States and Guinea's other international partners "to support the country as it navigates a path toward national unity."

The State Department urged all sides to forge "a process of national dialogue to address concerns sustainably and transparently to enable a peaceful and democratic way forward for Guinea to realize its full potential."

The United Nations, France and the Economic Community of West African States, or ECOWAS, were quick to condemn the unrest in Guinea.

Mohamed Ibn Chambas, former special representative of the U.N. secretary general and former head of the U.N. Office for West Africa and the Sahel, told VOA that ECOWAS bears no responsibility for the unrest in Guinea because its leadership repeatedly warned Conde against amending the constitution and running for a third term.

Chambas says he expects ECOWAS to reiterate its "policy of zero tolerance for military coups d'état," adding that there "is no way that the current situation can be accepted by the authority of heads of state and government."

VOA's James Butty contributed to this report. Some information came from The Associated Press, Reuters, and Agence France-Presse.