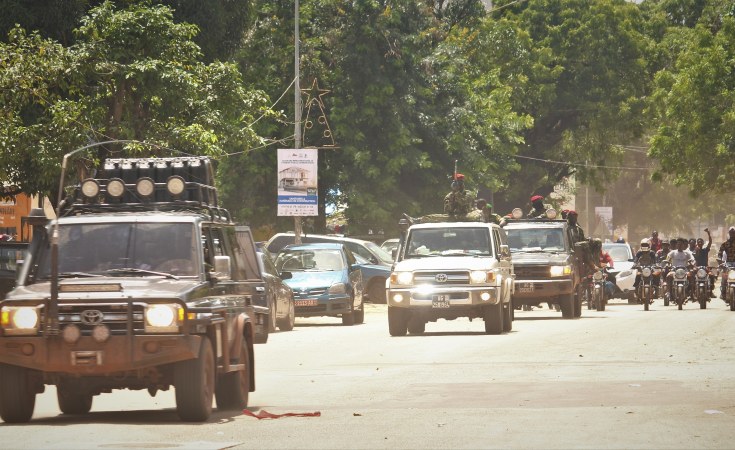 Aboubacarkhoraa / Wikimedia Commons
A military parade in Conakry on September 6, 2021, the day after a military coup in the country.
Liberia News Agency (Monrovia)

Monrovia — President George Manneh Weah has mandated the National Security Forces of Liberia to increase their vigilance and visibility around the border areas of neighboring Guinea as the security situation there remains fluid.

President Weah has also ordered that usual patrols must be strengthened by the relevant security forces who already have presence in the bordering areas.

Chairing the emergency National Security Council Meeting Monday, to examine the security and political ramifications that the military and political crises in neighboring Guinea could have on Liberia, the Commander-in-Chief of the Armed Forces of Liberia said these measures are intended to protect Liberia's territorial integrity and put the country in potential readiness to address any possible border influx of Guinean citizens who might want to seek refuge in the country.

President Weah remains engaged with his fellow West African leaders under the framework of the Authority of Heads of State and Governments of ECOWAS in intervening to end the security and political impasse in neighboring Guinea.

The Liberian leader has since condemned the military takeover of power in Conakry and called for the strict adherence to ECOWAS Protocols on Democracy and Good Governance which abhor such unconstitutional ascendency to state power in the ECOWAS sub-region.

Meanwhile, an extraordinary Summit of the Authority of Heads of State and Governments of ECOWAS is scheduled to be held Thursday, September 9, 2021 in Accra Ghana with President Dr. George M. Weah to be in attendance.

The Summit is to review the security and political crisis in Guinea and adopt a common approach and strategy in the regional body's intervention, a statement signed by Information Minister Ledgerhood J. Rennie said on Monday.

Coup Leaders Try to Reassure the International Community and Investors