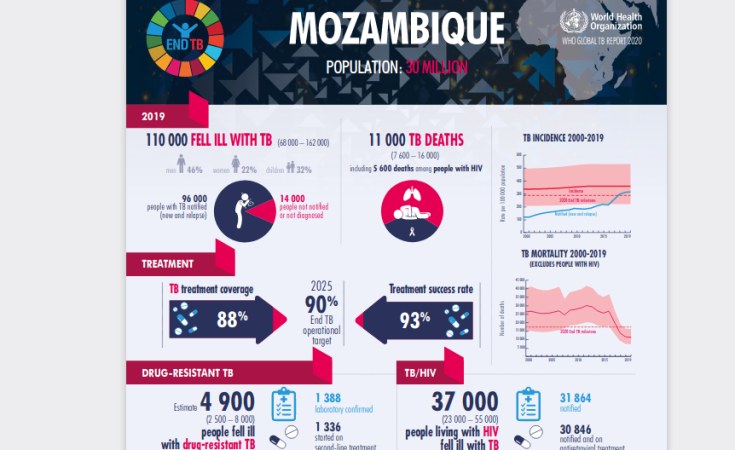 Maputo — 3,413 patients across Mozambique are undertaking the new tuberculosis preventive therapy, coupling strong doses of isoniazid (H) and rifapentine (P), to prevent simple and non-contagious cases from worsening and increasing the number of infected people.

The new therapy, launched in March by the Mozambican government in partnership with the IMPAACT4TB consortium, is a four year project which introduces a new approach not only to deal with latent infection but also to fight abandonment of treatment and thus increase efficacy levels.

Addressing a workshop on Wednesday in Maputo, IMPAACT4TB representative Emilio Valverde said "so far, 3,413 patients have begun the new treatment in 70 health units and no relevant side effects have been recorded, except for a child in Maputo city who presented minor flu symptoms."

Valverde highlighted that since the launch of the new treatment programme only one case of abandonment has been recorded.

The new therapy, he explained, can easily be taken and consists of a smaller quantity of pills in a short period of time, a move that will definitely reduce the number of cases of abandonment of treatment.

He added that the therapy under implementation in Maputo city and in the districts of Chokwe and Mandlakazi, in Gaza province, is prescribed to new patients undergoing Anti-Retroviral Therapy (HAART) and children under 15 years of age who have been in contact with tuberculosis.

Mozambique is the first country in the world to adopt the combined fixed dose which enables an even more effective and practical treatment. Gradually, it will be spread to other areas across the country where there are tuberculosis patients.

Valverde added that preventive treatment is crucial in the fight against tuberculosis, and it is necessary to adopt therapies that make access and completion easy, in order to ensure the core objectives of the "End TB" strategy.