Africa: Is Africa Ready to Produce a Malaria Vaccine? 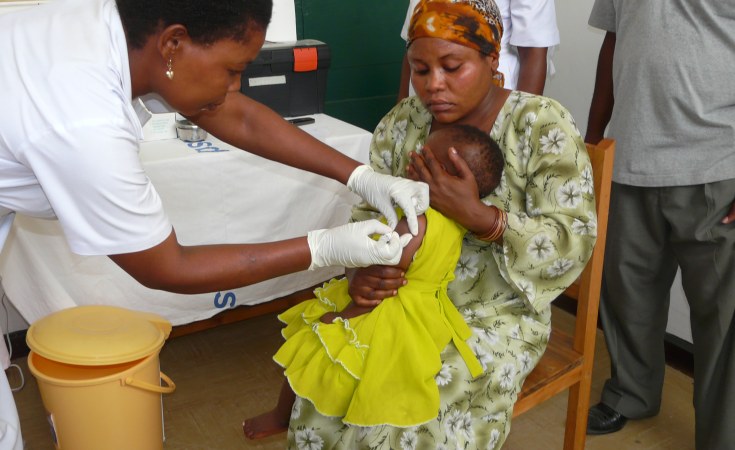 David Poland/PATH Malaria Vaccine Initiative
A nurse administers the first vaccination to a child in the RTS,S Phase 3 trial. The study began in Bagamoyo, Tanzania in May 2009.
Deutsche Welle (Bonn)
By Martina Schwikowski

BioNTech wants to continue the success of its COVID-19 vaccine and use mRNA technology to develop shots against malaria. But is production in Africa realistic?

There's a ray of hope in the fight against tropical diseases: German pharmaceutical company BioNTech said it wants to develop vaccines against malaria and tuberculosis.

Clinical trials are expected to start by the end of 2022.

The vaccines will use use BioNTech's messenger RNA technology that's already proven effective against COVID-19.

BioNTech also said it wants to produce the vaccines in Africa, with Rwanda and Senegal as potential production locations.

The plans by the Germany company are supported by several partners such as the World Health Organization (WHO), the European Commission and the Africa Centres for Disease Control and Prevention (Africa CDC),

However, there is debate over whether the continent is ready for made-in-Africa vaccines.

The Director of the German-based European Vaccine Initiative, Ole Olesen, says Africa has very limited capacity to produce vaccines, with only a handful of African countries having the ability to do the job so far.

Currently, Africa's centers of vaccine production are Institut Pasteur in Senegal and Tunisia, the pharmaceutical company Biovac in South Africa, and Vacsera in Egypt.

Ethiopia, Nigeria, Ghana and Rwanda are also in the process of building up their pharmaceutical industries, says Patrick Tippoo, the Director of the African Vaccine Manufacturing Initiative.

"It's a huge challenge to set up factories in Africa, train up people, do the technology transfer, get the regulatory approvals and then make the product for clinical trials by the end of 2022," Tippoo told DW.

Loans from development institutes but also support from governments, contributions from organizations and private investors could help make this happen.

It isn't impossible for BioNTech to reach this goal, but much hinges on large sums of money and everything go smoothly, said Tippoo.

After decades of research and failed attempts to eradicate malaria, a highly effective vaccine could finally provide protection.

The malaria vaccine Mosquirix, produced by pharmaceutical company GlaxoSmithKline, was rolled out in 2019.

But it has a limited efficacy of around 30%, which doesn't meet the WHO goal of "developing malaria vaccines with protective efficacy of at least 75%."

Several other vaccine candidates are in development.

Malaria is a infectious disease caused by single-cell parasites. Endemic in 87 countries, it's transmitted by female Anopheles mosquitoes, which carry the parasites from one human to another.

There are five different type of parasites that infect humans. The most dangerous of these is malaria tropica, which can lead to organ failure.

If malaria isn't promptly treated, the infection can become severe and "may cause kidney failure, seizures, mental confusion, coma, and death," according to the US Center for Disease Control.

With 94% of the malaria cases in 2019 occurring in Africa, governments there are keen to see a malaria vaccine sooner rather than later.

"The key advantage of the mRNA technology is that it is very flexible. It consists of different building blocks which can easily be exchanged and adapted towards different targets," said Olesen from the European Vaccine Initiative.

"It's almost like a set of Lego bricks where you can imagine that the different bricks can be put together in different ways," he told DW.

"In the case of COVID-19, it was relatively simple to identify the target. The virus is simple and it was quite clear that the spike protein was an obvious target," he said.

"For the malaria parasite it's a much more complicated story. And this has caused many headaches and many failures over the years for people who tried to develop a vaccine against malaria."

A virus such as COVID-19 only contains a handful of genes, but the malaria parasite is made up of 5,000, Olesen explained.

Infrastructure and political will crucial for success

Many factors have to come together for such a project to be successful.

Production involves substantial costs and establishing a reliable flow of raw materials is also crucial, something that has been a problem in the production of COVID-19 vaccines.

But you also need the good will of the producers to transfer technology and the interest of local governments, Olesen said. And last but not least: Reliable cold chains to store and transport the vaccines.