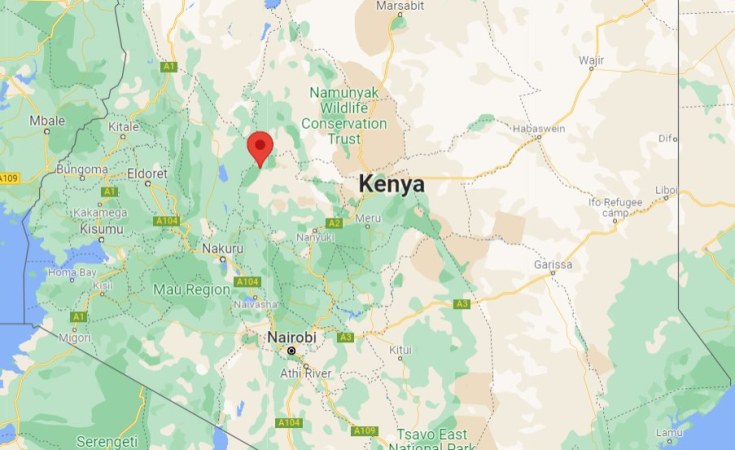 Google Maps/screenshot
A map showing the location of the Ol Moran region of Laikipia, Kenya.
The Nation (Nairobi)
By Nation Team

Suspected bandits were yesterday roaming freely in several villages in the troubled Ol Moran region of Laikipia even as the government prepares to re-open schools today.

Although there was an uneasy calm for the second day, pockets of incidents were reported, including the torching of a house in Dam Samaki Village, several kilometres from the Ol Moran township, on Saturday night.

The bandits were trying to regain a flock that had been recovered by National Police Reservists but were repulsed by security forces.

"Though guns are silent, we have not yet returned to our homes because bandits are still roaming freely in our homes. Last night they were at Dam Samaki Village, where they torched a home," said Ms Damaris Kerore, whose husband, Mr Kerore Githinji, was shot and injured by bandits at Mirigwit Village.

"There is a heavy presence of security officers, but the government must assure us that we will be safe when we return home," said Ms Kerore, who is seeking refuge with her two children at the Ol Moran Catholic Church.

Residents want the police and the Kenya Defence Forces to provide security to their children before the government proceeds to re-open schools.

"The bandits who razed down our houses are still here and are interacting with locals. Some of them even came to Ol Moran centre for the food rations that were being distributed by the government. They, however, rejected maize, beans and rice, and only accepted water and bread. It's because they cannot settle down to cook," Ms Edna Kwamboka, a resident, told the Nation.

"What the government should do is concentrate on intelligence and pay attention to locals who are willing to give information about these criminals," said Mr Boniface Wanjiku, a resident.

Since the arrival of Dr Matiang'i on Friday, residents said there were changes in the operations of security forces. Security forces yesterday continued with aerial surveillance on two helicopters.

On Saturday, an aerial strike was launched several kilometres from Ol Moran on suspected bandits.

In Leshao Pondo Ward in Nyandarua County and in neighbouring Pesi area of Laikipia, tension is building up after an invasion by dozens of herders fleeing the operation in Ol Moran.

Residents said the herders had constructed manyattas in unoccupied farms and plots between Pesi and Umoja Mbuyu areas, with thousands of livestock grazing the fields.

"I have lost half-an-acre of maize to the animals. I pleaded with them to remove their livestock from my farm but they ignored me. Instead, they began singing their traditional songs," said Ms Carol Wambui, a farmer in Umoja Mbuyu.

An elder, Mr John Macharia, said a few of the pastoralists were spotted grazing the animals during the day as most of them return at night.

"Our livestock have no place to graze. The herders are rude, hostile and arrogant. We want the government and security agents to ascertain their origin and the motive of invading our farms," said Mr Macharia.

Mr Natembeya told the Nation that five suspected bandits had been arrested.

"The operation continues until Ol Moran, the Laikipia Nature Conservancy and its environs are clean," said Mr Natembeya.

Police have erected a roadblock along the Sipili - Ol Moran Road, with more than 10 officers on duty. Vehicles entering Ol Moran, the headquarters of the newly established Kirima Sub-county, are inspected.

Laikipia Governor Ndiritu Mureithi urged parents to release their children to go back to school.

"All is set for resumption of learning as the government has deployed dozens of officers. Others will be deployed in our schools to ensure our learners and teachers are safe," the governor told worshippers at the Ol Moran Catholic Church.

Survey Primary and secondary schools and Mirango, Ndunyu Loi, Magadi and Mirigwiti primary schools were closed due to the violence, which also resulted in the deaths of 10 people while hundreds were displaced.