Kenya: How Feminists Shaped Kenya's Response to GBV Amid Covid-19 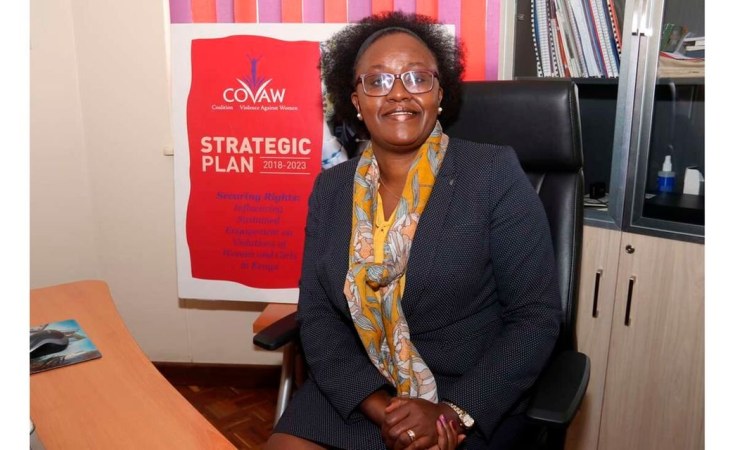 The executive director of Coalition on Violence Against Women-Kenya (Covaw-K) observed that Mr Kagwe had the influence to change people's attitudes by reminding them that "staying at home doesn't mean you perpetuate violence against your loved one."

By then, there was a horrifying global surge in domestic violence standing at an average 30 percent, prompting UN Secretary General António Guterres to call for a ceasefire.

Here in Kenya where GBV lifetime prevalence for women is 38 per cent and 20.9 per cent, for men, the numbers had blown up by 42 per cent.

Then on April 14, Health Chief Administrative Secretary Dr Mercy Mwangangi mentioned the spike in GBV, especially sexual violence perpetuated by relatives and guardians, and warned the offenders that the law "has not been suspended" and so it will catch up with them.

The following day, Mr Mutahi also reiterated the call to end the violence, calling on religious leaders to intervene and counsel people against rising GBV.

Ms Wahome says the Health ministry officials' response had a ripple effect as then "interventions were designed to amplify mitigation and response against GBV."

Ms Wahome and Covaw-K is among the feminists and associated organisations that shaped Kenya's response to GBV in the mix of Covid-19, a pandemic that has horrifically thrown women and girls into burning flames of physical, sexual, economic and psychological violence-most perpetrated by intimate partners, relatives and guardians.

On April 22, a consortium of feminist organisations petitioned the government calling for a 30 per cent allocation of Covid-19 funds to GBV response.

The funds would be split into supporting shelters to keep safe and provide survivors with basic necessities along with medical care, psychosocial and legal support.

This has not happened till now but three months ago, the government listed shelters and safe houses as essential services. The providers can, therefore, acquire special passes to operate during the curfew hours when the violence is most prevalent.

The continued outcry drew the attention of President Uhuru Kenyatta, who then directed National Crime Research Centre (NCRC) to probe the spike.

Its findings indicated a 92.2 per cent rise between January and June, 2020, where 71 per cent of the 2,416 cases of GBV recorded during the period were perpetuated on women and girls. An equivalent of 10 females were violated each day during the six-month period

Similarly, data from national helpline 1195 - one of the more than 25 hotlines established by government ministries and departments and civil society - showed 5,009 cases had been reported from January to December, 2020, compared to 1,411 the previous year.

But while other countries such as South Africa and Canada extended financial hand to women's rights organisations to support GBV survivors and rescue shelters, in Kenya such crucial facilities were cash-strapped to closure, with no government support in sight.

Locally, a number of the 51 private-run shelters that spread across 17 counties had to fold since they could not sustain the girls or women under their care. Those that weathered the storm had the financial backing of UN Women and other donors.

Nainyoie Safe House in Samburu County closed its doors in December, 2020, returning home the 20 girls who had been rescued from female genital mutilation and child marriage.

"We had to close because we didn't have even the basics like food. Our county government does support not us. We rely on donors and most of them have pulled out because they are also having their own challenges in their own countries," says the shelter's director Ms Irene Leshore.

In Nairobi, Ms Consolata Waithaka, director of Woman's Hope shelter - who by the time of interview had 30 women under her care - admits that she could have shut down in April, 2020 had UN Women and Centre for Rights Education and Awareness, not bailed her out.

The feminists too, offered the survivors the most needed psychosocial help and legal support without charge through some 25 hotlines set up during the pandemic. This is in addition to putting them on a cash transfer.

Fida-Kenya, for instance, was 'very affectionate' in its appeal to GBV survivors to seek help through its helpline.

It said in its social media pages: "Do not be silent about gender-based-violence. Speak out! Call our toll free number 0800 720 501 for assistance. We care about your wellbeing."

Fida-Kenya senior legal counsel Ilham Hisham, says in the past year of the helpline's existence, it has recorded more than 5,000 cases of women and girls subjected to GBV, across the country.

Emily (name changed), from Uthiru, Kiambu County, would have died had her friend not called a hotline that she has no recollection of, rescuing her from her abusive husband.

What she remembers is her husband beating her badly in mid-July last year. At the time, she was eight months pregnant with his child. The neighbours intervened when they had her cry for help, chasing away the husband. A friend would later call a hotline and through it, she got place in a rescue centre in Karen, Nairobi County.

Her yearn for a fresh start got a boost. She left the shelter in early October with a cash bundle of Sh7,000, thanks to a consortium of women's rights organisations namely Creaw, Oxfam Kenya, Kenya Red Cross Society, Concern Worldwide, Impact, Acted and Wangu Kanja Foundation.

She is one of the 1, 445 survivors in Nairobi, who benefitted from the consortium's cash transfer initiative.

Creaw lead counsellor Neerah Akoth, says financial help "is a most crucial essential in building resilience of GBV survivors and shelters providing related services," and they are happy to have bridged the gap. But adequate government support is of utmost importance and generally sustainable, she notes.

Based on NCRC study, 29 per cent of the 2,416 GBV cases reported between January and June last year, were of male as victims.

Victor (not his real name) underwent psychological abuse perpetrated by his wife soon after he lost his construction job following government's confirmation of Covid-19 outbreak in the country.

The flurry of insults questioning his masculinity and discrediting his suitability as the head of the family drove him to the edge.

"She says she finds me useless as she cannot understand why other men have managed to secure jobs at alternative construction sites yet I have not," he said when we interviewed him in July, last year.

By then, a men-only GBV hotline, 1196, had turned a month-old. And for him, it was a saving grace. He got to learn about it through an article published in the Daily Nation, a few days earlier.

"I took a snapshot and decided to call. The counsellors have really helped me relieve the tension within. Whenever I feel like I am losing it, I call for counselling," he said.

Mr Dan Shieshie is the brain behind the launch of the hotline. And in its maiden month, according to the founder of DanShieShie Foundation, "an average of 70 men were calling daily to seek for psychosocial support."

Away from the urban and national push; in the counties and rural areas, the feminists were making aggressive efforts to reach out to county leaders, men, village and religious leaders to end the violence.

Ms Halima Ali, SRHR Lead at Femnet, says the men would then engage county officials to develop response plans and sensitise the communities on eliminating violence.

Mr Emmanuel Kiprotich, a member of International Youth Alliance for Family planning, technical working group, says they had to do door-to-door anti-GBV campaigns in the rural Narok, his home county.

"The elders were supportive of the idea and this helped bring the message home and strengthen surveillance against rape and defilement," he says.

Here lived experiences of women and girls are highlighted, and the feminists call for inclusive anti-Covid-19 responses.

"The hub acts as a one stop hub where African women and girls of all their diversities can access Covid-19 information and stories that relate to Africans...there is also information on GBV response plans developed by various African countries," says Ms Ali.

These national and grassroots activities have paid off. United Nations Development Program tracked governments' gender responsiveness in the fight against Covid-19, finding 52 out of the 55 African countries, to have at least one gender sensitive measure. Countries such as Egypt, Rwanda and Zimbabwe had specific actions to stop violence against women and girls.

The government acknowledges the role of these feminist movements.

Gender Chief Administrative Secretary Dr Linah Jebii Kilimo says the movements have raised the "antenna of what is happening".

Generation Equality Forum held in Paris, France ended with $38.5 billion committed towards advancing gender equality in the next five years.

The forum convened by UN Women and co-hosted by Mexico and France governments, also attracted about 1,000 policy and program commitments from at least 440 civil society and 94 youth-led organisations.

These commitments cut across the six Generation Equality focus areas namely GBV, women's economic justice and rights, sexual and reproductive health and rights. Others are feminist action for climate justice, feminist movements and leadership, technologies and innovations that support equality between men and women.

Kenya as a co-leader of GBV Action Coalition along with United Kingdom, Uruguay and Iceland, made 12 commitments. Among them, is development of a GBV management and information system, $23 million of own funding on GBV prevention and response by 2022, to be increased to $ 50 million by 2026.

Mr Kenyatta also committed an annual allocation of $1 million for GBV research and innovation, results of which will boost his government's efforts towards creating a GBV-free society.

Femnet too, as a co-leader civil society in Economic Justice and Rights Action Coalition committed to strengthen feminist movements across Africa.

Already, Gender equality programs attract a mere four per cent in bilateral aid while 62 per cent of the bilateral aid is gender blind, according to Organisation for Economic Co-operation and Development.

On the other hand, Covaw-K is embarked on strengthening anti-FGM feminist movements in Samburu, Narok, Nairobi, Migori and Meru counties.

And so for Ms Wahome, "Commitments are all good but they are activated and become meaningful when they are supported by relevant resources."

Gender Based Violence on the Increase, Govt Warns