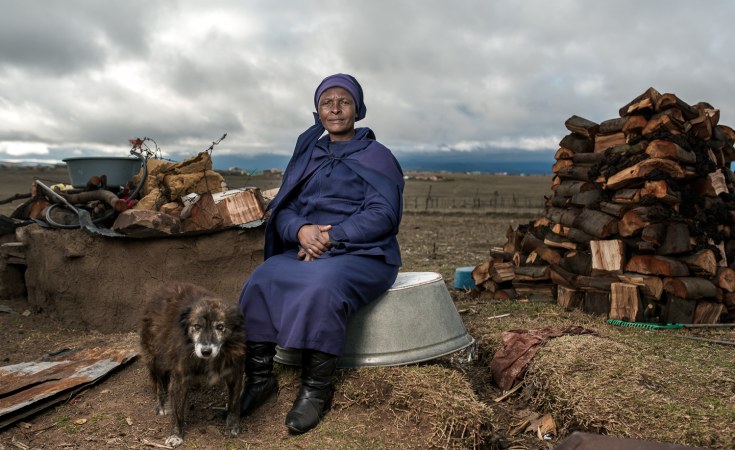 Thom Pierce/GroundUp
Zwelakhe Dala died on 30 March 2015. He was 55 years old and suffering from silicosis. He worked on the gold mines for 28 years and received no compensation when he got sick. “It is too painful. If my husband was not working on the mines, he would still be alive.” says his wife, Nosipho (pictured).
New Frame (Johannesburg)
By Thabo Molelekwa

The Tshiamiso Trust has begun paying out workers who contracted silicosis and TB in South Africa's gold mines, but the amounts are paltry against what they have lost to poor health over the years.

After a long wait for compensation, close to 20 years for some, former miners who contracted silicosis and tuberculosis (TB) in South Africa's gold mines are being compensated for the damage that working underground did to their health.

But a 68-year-old man who worked at a Sibanye gold mine from 1982 to 2010 - his lawyers at Richard Spoor Inc Attorneys requested that he remain anonymous - says he is not happy with what the Tshiamiso Trust has paid him. The trust was established to ensure claimants in the class-action suit against the gold mining companies are compensated.

"I left the mine in 2010 after I was no longer fit to work since the accident that happened underground and I sustained injuries," he says, adding that he had already contracted silicosis at this point.

The former mineworker received R70 000 in compensation, which he says is "a joke" and that he won't rest until he gets what is due to him. "I'm planning to go to their [the Tshiamiso Trust] offices to get an explanation of what is it that they have just paid me. For all the years and damage to my lungs, is this amount all I get?"

Another former mineworker and client of Richard Spoor Inc Attorneys says he worked at a Sibanye gold mine from 1980 but was released from duty in 1995 because he had contracted TB and silicosis. He is now extremely ill.

"I have been waiting for this day for so many years. Well, I'm not happy with a little over R200 000 that they have given me, but I don't have time to contest it as I'm sick. I need doctors who can help me with this silicosis sickness," he says, coughing as he struggles to finish his sentence.

The money will also help pay his children's school fees as he can't afford them.

The Justice for Miners Campaign aids employed miners, those who have lost their jobs because of silicosis or TB or both and the families of mineworkers who have died. It says that although it appreciates the payments the trust has made, the amounts are insufficient.

"As much as we see this as a step in the right direction [the about 100 miners who have been paid], [it] is but a drop in the ocean. We say this knowing that half a loaf is better than nothing. However, there are approximately 500 000 ex-miners that must be paid out of R5 billion within 12 years, as per the high court judgment of 2019."

To report a settlement of R9 074 523 in the two years since the trust deed came into effect on 26 July 2019 is hammering a nail in the coffin of the majority of still uncompensated claimants and their families, it says.

The Justice for Miners Campaign says more could have been done had the trust worked with organisations that share the same vision. "As much as we have had good engagements with the trust, we believe more can be done to facilitate compensation payments and minimise delays." The campaign says it is the responsibility of the mining companies and Minerals Council South Africa to ensure that the Tshiamiso Trust works effectively and quickly to fulfil the obligations set out in the trust deed.

The campaign says it has received many queries from claimants and hopes thousands of eligible claimants will receive payments in the weeks following the long overdue first batch of payments. It also wants the trust to implement and publicise an appeal mechanism for claimants found to be ineligible, as without a just and clearly outlined mechanism, many will not receive the compensation to which they are entitled.

Richard Spoor Inc Attorneys provided the Tshiamiso Trust with "a database of more than 25 000 prospective class-action clients" and their supporting documents in December 2019. "Some received payment in the pilot payout earlier this year and more received payment with this more recent first formal batch of payments. [But] the majority must still be processed," says George Kahn, a senior associate lawyer at the firm.

"We share the numerous organisations' concerns about the slow progress being made and this was one of the principal motivations for the early settlement rather than running a ... trial that would likely not end before 2035, and then not assist most of the workers that may have passed away by then.

"What provides us some comfort is the trust live dashboard that suggests that 2 193 cases may be compensated within the next 120 days, and still within this year," he says.

"One is always glad to hear that a mineworker has reached the end of their very long and difficult journey and that they have received some symbolic justice for what they endured. The compensation received can never fully restore to them what was taken, but they must be acknowledged for what was done to them."

Kahn recognises that the trust "is faced with a mammoth task ... Closing this chapter of our history is no simple nor small task. It will require a collective responsibility and support system to ensure that the trust can deliver on its court-mandated task."

He says there are many reportedly trying to take advantage of claimants, by charging them to process claims when the trust was designed to not require lawyers, paralegals or other third parties. This constitutes fraud and should be reported to the police and the trust.

The trust's capacity to process eligible claimants "through the lodgement and medical examination processes" needs to increase, says Kahn.

The Tshiamiso Trust expects "to see a steady flow of payments to claimants in the months and years ahead now that the requisite processes have been set up", says spokesperson Monako Dibetle.

The trust has disputed the number of miners that the Justice for Miners Campaign says must benefit from the settlement. "We are not sure where the 500 000 number comes from. The exact number of claimants who will ultimately be found to have made successful claims is unknown. We agree, however, that the first 100 payments is a very small step," says Dibetle.

He says the trust has existed for about 18 months rather than the two years the campaign is claiming - since February 2020 - and that there are a number of reasons it has taken this long to make the first payments. They include the long and complex court-approved trust deed to which Tshiamiso must adhere and the eight steps involved in processing each claim.

"The trust is learning and becoming more efficient as all the systems begin to operate with greater efficiency. We are monitoring the distribution of physical infrastructure and will continuously work to optimise its efficiencies, including expanding it where necessary. All this is, of course, subject to budgetary constraints, as is the case with all organisations," says Dibetle.