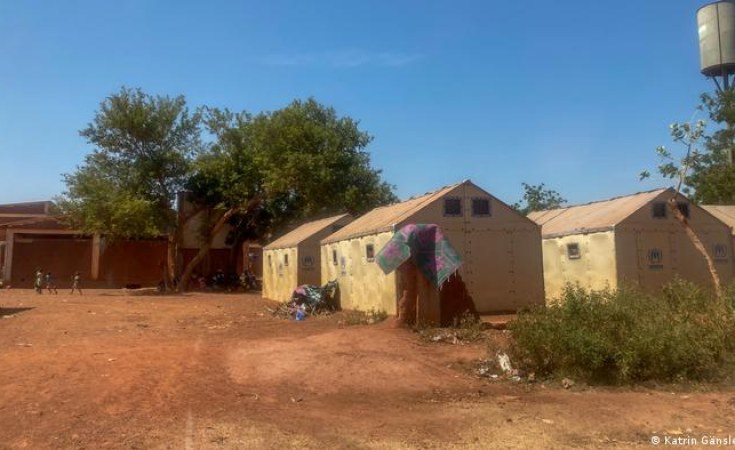 Ouagadougou, Burkina Faso — International aid groups are calling on Burkina Faso's government to let them help register the country's internally displaced people. The Norwegian Refugee Council says the government is taking weeks to register IDPs for food and other aid, forcing some back into dangerous areas.

In a statement released Monday, the Norwegian Refugee Council (NRC) said government authorities are taking weeks to register IDPs, like these 500 or so who until recently stayed at a school in the town of Ouahigouya.

The NRC say they could carry out the registration process, which is essential before aid can be distributed to IDPs within a week, and implored the government to quote, "Let us step in and support."

Rasmata Ouedraogo, who was living in the school, fled her village of Nongo with her young son after a terrorist attack.

She says they were wearing army uniforms, so it was difficult to know if they were terrorists. She had to hide herself for two days in her house.

She says she arrived in Ouahigouya around two months ago, and so far, her family has received one hundred dollars in aid payments.

"The first thing we need is food for us and our children, and then some clothes, among other things," she told VOA.

The community leader of the IDPs says this month students will return to their studies, so the school's owner has asked the IDPs to move out. Local authorities sent them to a site outside of the town where access to food and services is difficult.

"At the very beginning, we were able to have some cereal like maize and millet plus $100 for each family, but that was two to three months ago," he says. He added that some people arrived more recently, and those people have not gotten any food so far.

Many of the IDPs who stayed at the school say they are unsure of whether they've been registered or not, but say none of them are receiving enough aid. Tom Peyre-Costa is from the Norwegian Refugee Council.

"Authorities really lack the capacity to count and register newly displaced people, and meanwhile aid organizations are not allowed to intervene. So, this is what we are asking for today. We need more flexibility," he said.

In a tense press conference Monday, Laurence Marchal Ilboudo, the minister of humanitarian affairs said this when asked why offers of assistance from aid groups were being turned down.

As the school now lies empty, waiting for the students to return, the IDPs who resided there remain in need of help.