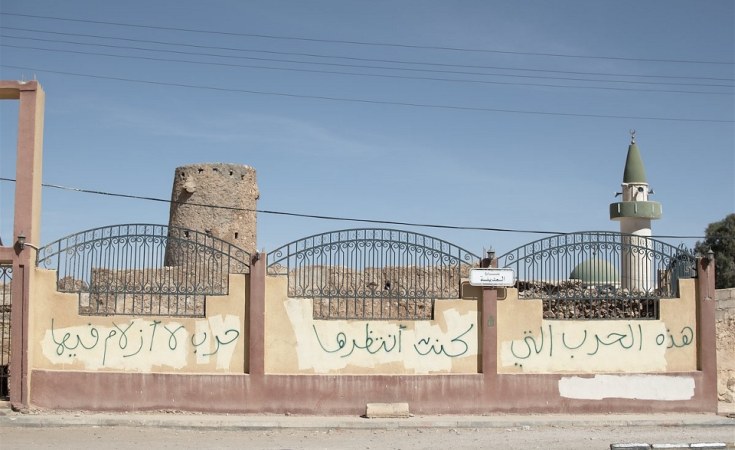 Jorge Vitoria Rubio/IRIN
Graffiti in Mizdah reads: "This is the war I was waiting for"
Egypt State Information Service (Cairo)

President Abdel Fattah El Sisi asserted that Egypt would continue its coordination with all Libyan sides concerned during the coming period until the parliamentary and presidential elections are held in December.

Sisi's comments came during his meeting on Tuesday with Speaker of the Libyan House of Representatives Aqila Saleh and Commander of the Libyan National Army Khalifa Haftar, in the presence of General Intelligence Service (GIS) Chief Abbas Kamel, said Presidential Spokesman Bassam Rady.

The meeting addressed the latest developments in the Libyan arena, especially in light of Cairo's firm stance on the necessity of achieving Libya's stability, which is seen as part and parcel of Egypt's security and stability, the spokesman added.

On their part, Saleh and Haftar highly praised Egypt's role to help resolve the Libyan crisis, expressing his esteem for its strenous efforts to support Libyans in managing the transitional period, as well as its contribution to uniting the Libyan army, the spokesman noted.

The two Libyan officials asserted that they agreed with the Egyptian leadership on the necessity of holding the parliamentary and presidential elections before the end of 2021, while moving ahead with efforts to strengthen national security and kick out all mercenaries and foreign troops from Libyan soil.

Elections Represent an Opportunity for Stability and Unity