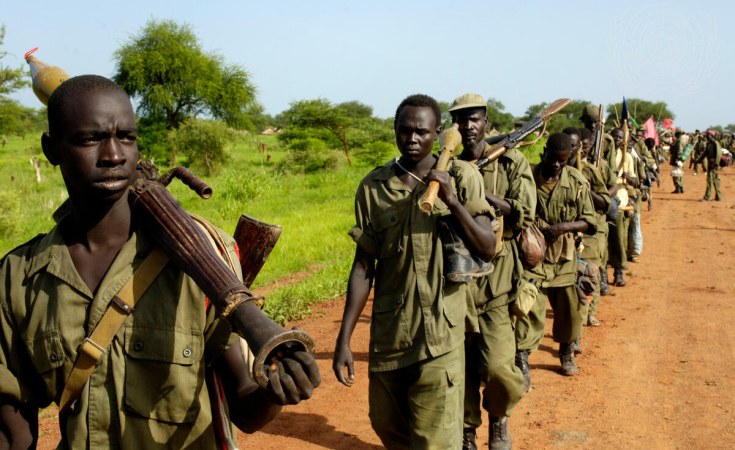 South Sudan has failed to unify the country's armed groups into a single force with a central goal of ensuring national security. The task of security sector reform has been frustrated by a militarised political culture that could see political tensions boiling over into armed conflict.

The most recent illustration is the fallout between Vice President Riek Machar and senior figures in his opposition party. In August, the leadership tried ousting Machar as party head, with First Lieutenant General Simon Gatwech Dual emerging as leader of the rival faction.

Reports that armed forces loyal to the two camps exchanged gunfire were reminiscent of the December 2013 shootout between members of the presidential guard at the start of the civil war. Although Machar maintained his hold over the party, the fallout shows how rapidly political infighting can escalate into armed violence.

Both the ruling party and opposition in South Sudan are founded on military movements with weak political wings. As a result, the lines are blurred between the leadership and the armed forces. This tendency has also reinforced ethnic divisions that impede unification of troops in the Sudan People's Liberation Army (SPLA) and the SPLA In Opposition.

The armed forces have become a powerful instrument aligned mainly to individual leaders rather than the state or central party structures. Combining these groups under a national system would dilute the leverage that opposition generals have gained from commanding their own militias. Unless the role of party military wings is changed, political tensions in the opposition will probably escalate into armed confrontations that could trigger widespread instability.

The lack of security sector reform has affected not only the armed forces but also the police and other security institutions. Changes that started in 2005 were halted by the outbreak of the 2013 civil war. Current reforms were launched in 2018 under the Revitalised Agreement for the Resolution of Conflict in South Sudan (R-ARCSS) - and is proving to be a vital step for securing peace. Unfortunately, the country's political and institutional terrain complicates the process.

After several failed peace agreements, the R-ARCSS led to cautious optimism that the country could be stabilised, allowing the reforms that had stopped during the civil war to continue. The United Nations Mission in South Sudan has been at the forefront of supporting these renewed efforts.

The R-ARCSS provides for security mechanisms to oversee the reforms during the 18-month transitional period. These include: the Joint Transitional Security Committee responsible for the training and redeployment of unified forces; the Joint Military Ceasefire Commission; and Area Joint Military Ceasefire Committees that monitor the cantonment areas and train opposition forces.

Three years on, the mechanisms to oversee security sector reforms are still not fully functional

These structures were supposed to be established within two weeks of the R-ARCSS. Nearly three years later they are still not fully functional, with armed groups remaining outside their cantonment camps. These camps were established to register, screen and disarm soldiers and facilitate the selection of members for recruitment into the police, army and other security institutions.

But troops have continued to desert cantonment camps due to poor living conditions and food shortages. So delays and missed deadlines have hindered the process of creating a unified South Sudan People's Defence Forces, which will replace the Sudan People's Liberation Army.

There is also some confusion on the unification ratios of the army command, with Machar denying that he agreed to the SPLA In Opposition receiving only 40% of the positions. This stance echos his pattern of reversals of commitments under the transitional government.

These challenges show just how precarious the political context and institutional frameworks are that underpin the reforms. The recent attempted overthrown of Machar as opposition party head is evidence of this. The disagreements within the SPLA In Opposition also led to the resignation of the party's deputy Henry Odwar from the transitional government. Odwar has issued a scathing criticism of Machar that mentioned his negligence of opposition forces in cantonment areas.

Machar's spokesperson accused Dual's rival faction of leading the attempted ouster in a bid to prevent the unification of the armed forces. Tensions between Machar and the SPLA In Opposition's military wing could have violent repercussions that further disrupt the country's reform process.

Resolving these tensions and getting the unification of the armed forces back on track won't be easy. A vital step is ensuring that the Joint Military Ceasefire Commission and Area Joint Military Ceasefire Committees are fully functional to enable the creation of a single defence force for the country. Ultimately though, reviving South Sudan's reforms will depend on the political commitment of the country's leaders, particularly the opposition, to the 2018 peace agreement.

This article is published as part of the Training for Peace Programme (TfP), funded by the government of Norway.

Previous Story
Tagged:
Copyright © 2021 Institute for Security Studies. All rights reserved. Distributed by AllAfrica Global Media (allAfrica.com). To contact the copyright holder directly for corrections — or for permission to republish or make other authorized use of this material, click here.