Kenya: No Covid Apocalypse As Matatus Return to Full Capacity 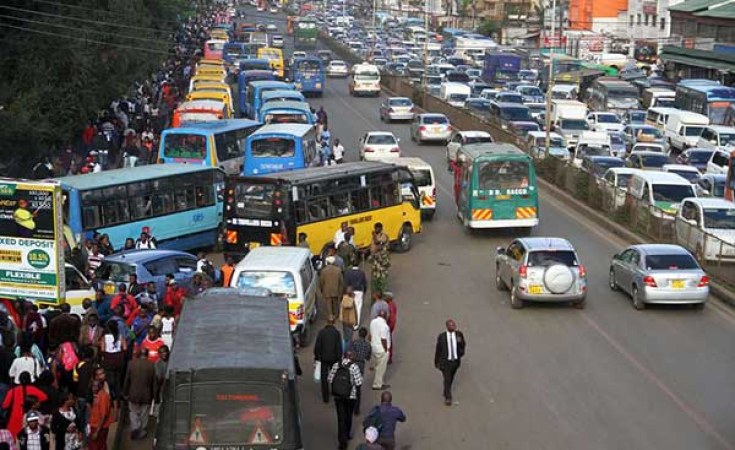 Martin Mukangu/Daily Nation
Matatus pick up passengers along Murang'a Road in Nairobi in 2018.
The Nation (Nairobi)
By Mercy Simiyu

Whether it's by sheer luck or the mercy of the gods, the return to full capacity in public transport hasn't driven the nation to a Covid-19 Armageddon as had been feared.

It's now slightly over a month since the Ministry of Transport caved under pressure and cleared public service vehicles (PSVs) to resume normal operations, albeit with several conditions.

Though the announcement was inevitable since the government had been accused of being insensitive to the sector as airlines and railways had been operating at full capacity since July last year, there were also good reasons.

PSVs were reportedly the weak link in the fight against the virus. Apart from lacking the ability to regulate themselves, they're often crowded and characterised by rowdy drivers who disregard health protocols.

In Nairobi, the latest report shows that about 42 per cent of daily commuters walk, 48 per cent ride a matatu, five per cent drive and the remaining five per cent use other modes of transport.

Health experts say one only needs to be within two metres of an infected person for more than 15 minutes to be infected with the virus.

Furthermore, the limited access to basic sanitation facilities at bus stations and the routine exchange of cash inside matatus are all risk factors for the spread of Covid-19.

The Centres for Disease Control and Prevention says the incubation period is at most four days. On average, symptoms show up in the newly infected person about five days after contact.

Yet, despite all these factors, it's now 40 days and counting since matatus resumed normal operations and there has been no surge in infections.

The Nation Newsplex has observed that infection numbers surged in July and August as the fourth wave hit its peak. But even with the presence of the Delta variant, the numbers have been going down.

The Ministry of Health declined to comment on the numbers, saying it could only "talk about the overall situation". While the drop in numbers may look impressive, experts warn that there has been no significant change in the Covid-19 curve over the last one month.