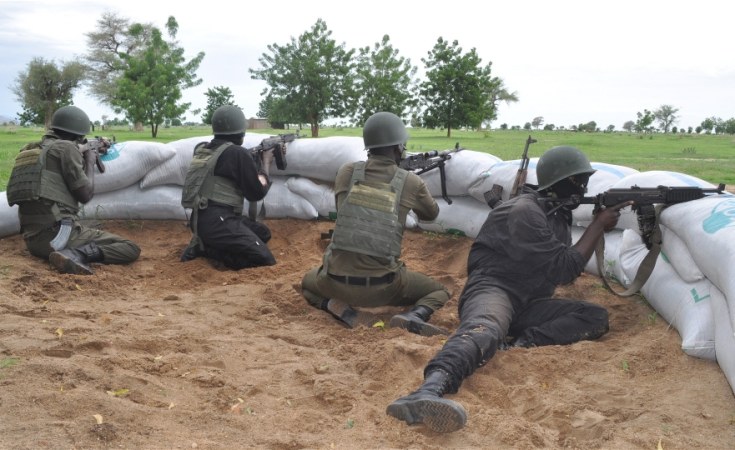 Yaounde — Witnesses in the northwest Cameroon town of Kumbo have accused the military of killing several civilians during retaliatory raids Monday on separatists. Cameroon's military denies any civilians were killed. The clashes followed the deaths of seven troops when their armored vehicle hit an improvised explosive device. Cameroon's Presbyterian Church is calling for an independent investigation into reports of civilian deaths.

Cameroon's military said Monday that seven of its troops perished when their armored vehicle hit an improvised explosive device in the western village of Kikaikelahki.

The troops were part of a military convoy dispatched to fight separatists around the town of Kumbo.

The military says other troops have been deployed to find and kill the separatists who planted the explosive device.

Deben Tchoffo is governor of Cameroon's northwest region where Kumbo is found. He says the troops also were ordered to search and seize weapons used illegally by separatists.

"The circulation of those arms were banned by the government, and we instructed administrative authorities and security forces to recuperate all those guns and ammunition that are circulating in the region. Many guns have been taken and are now kept at the level of administrative and security services. The process is ongoing."

Cameroon military says in a reprisal after the seven troops were killed, government troops killed 13 fighters.

Philip Ndongwe is a teacher in Kumbo. He says one of the people killed is a popular motorcycle taxi driver. He says men who attacked the house they ran to for safety were dressed in Cameroon military uniforms.

"They actually jumped into the campus, shot in the air, and you could see panic and there was nothing I could do other than struggling to also save myself. I first hid myself under the table. It was so traumatizing."

The Catholic Church in Kumbo on Monday condemned what it calls the killing of civilians and blamed both fighters and government troops for the violence.

Fonki Samuel Forba, moderator of the Presbyterian Church of Cameroon, says independent investigations should be carried out to find out if those killing civilians are fighters or government troops.

"There should be a cease-fire in this country. The barrel of the gun will not solve this problem. Until we sit down as a family and talk out our problems, we will not solve these problems. We are all waiting. We can only get a true story when a credible organization has done investigations of the situation. The culprits will be brought to book."

The military has denied any involvement in the killing of civilians and insists that all those killed are fighters. The military says its troops are professional.

Violence erupted in Cameroon's English-speaking regions in 2016, when teachers and lawyers protested alleged discrimination at the hands of the French-speaking majority.

The government responded with a crackdown that sparked an armed movement for an independent, English-speaking state.

Cameroonians Call for Cease-Fire in Conflict Zones On Peace Day