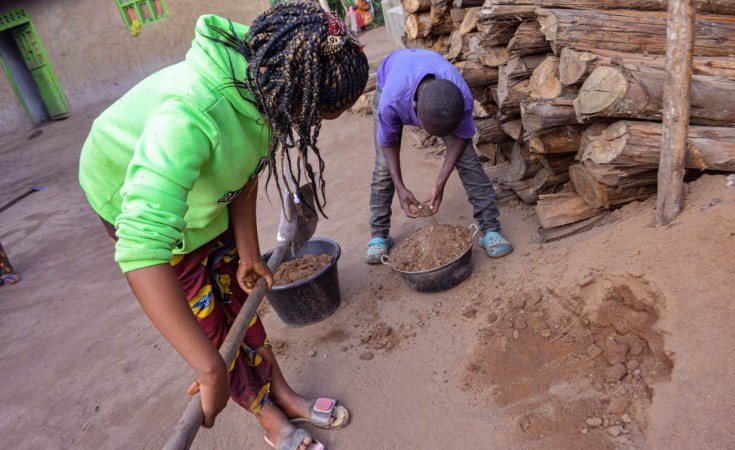 Hundreds of children orphaned by Ebola in the Democratic Republic of Congo have been driven to work amid trauma, discrimination and fear around the disease

Since Ebola killed her parents in 2019, Congolese teenager Patience has done various jobs to provide for her three younger siblings, from warehouse work to washing clothes for neighbours.

Her mother's dream was for all of the children finish school, but the oldest three had to drop out and find work after their parents died during the Democratic Republic of Congo's 2018-2020 Ebola outbreak - the country's deadliest on record.

"Since our parents died, we don't miss any opportunities to make money," 16-year-old Patience said in the eastern city of Butembo, the epicentre of the Ebola crisis that infected 3,470 people and killed nearly 2,300 before it ended in June 2020.

Patience's 14-year-old sister and 12-year-old brother are also child labourers who carry sand and sell leeks at the market to cover the school fees for their youngest sister, aged seven.

"We try to eat only at night," said Patience, whose name has been changed to protect her identity. She earns about 30,000 Congolese francs ($15) a month, which allows her to buy cassava flour to make the one meal the four siblings share each day.

About 2,770 children in eastern Congo lost one or both parents to the 2018-2020 Ebola outbreak, the United Nations estimates, and have ended up living with relatives, in orphanages, or even on the streets.

Traumatised and shunned due to discrimination around the disease, many children must work in order to eat, according to local advocates, who said efforts to care for and educate Ebola orphans were falling short due to a lack of funds and interest.

Zawadi Bisomeko - head of the Solidarity of Women's Associations for the Protection of Women and Children - said her charity had received money to set up play areas and help the most vulnerable orphans go to school, but demanded more be done.

"Funds have been limited ... without responding to the real needs of children who are suffering a lot," she said, adding that free education and counseling should be provided to all Ebola orphans, and training to teenagers to help them find work.

Patience said she had been called "the girl who lost her parents to Ebola" and rejected by friends, as charities and officials struggle to deal with the impact of such stigma.

"We have seen children wandering the streets because their aunts or uncles could not take them in due to fear," said Dibi Odile Mabanza, who is in charge of the gender, women, family, and children department of the Butembo town council.

"This is why most of them, despite their age, have become responsible for the household," she told the Thomson Reuters Foundation, adding that hundreds of Ebola orphans in or around Butembo had been forced to work to eat and feed their siblings.

And as in many nations globally, the fallout of the COVID-19 pandemic has fuelled a rise in child labour and hindered efforts to identify and help the most vulnerable children in Congo.

At the House of Compassion for Children in Need - an orphanage in Butembo - its head Dorcas Mbambu said she cared for about a dozen Ebola orphans: some whose relatives could not be traced, others who were seen as disease carriers and abandoned.

"I consider these children as my own, I breastfed them with love, I gave them names," said the 49-year-old, herself an orphan who used to work as a nurse while running the orphanage.

Yet Mbambu said she was frustrated by a lack of support for the children affected by Ebola, and said the government should prioritise family reunification efforts and education for them.

"These children here are forgotten and abandoned by the government and charities," she added, saying that officials had not visited the orphanage to enquire about the Ebola orphans.

Asked about the provision of care for such orphans, social affairs officials in Butembo and its province of North Kivu said it was not their responsibility and referred questions to the nation's Ebola response team and U.N. children's fund (UNICEF).

The now-defunct response team could not be reached for comment, but its former head of communications - Damien Mumbere Luhavo - also referred questions to UNICEF.

UNICEF representative Medard Onobaiso said the agency had supported children affected by Ebola, with nurseries, nutrition for infants, and counseling, and managed to ensure most orphans were now living with extended family rather than in foster care.

Limited funding for local charities and a lack of government oversight had hindered sustained monitoring and care, he added.

"These partners ... if they don't have the funding, they slack off on follow-up in the community ... the government did not take ownership of these programs properly due to a lack of resources," said Onobaiso, UNICEF's chief field officer in Beni.

For some families in Congo, taking in and caring for Ebola orphans has caused rifts and concerns over having enough to eat.

Francoise Masika, a mother of 10, took in seven nephews and nieces when her sister and brother-in-law died of Ebola in 2019.

"I had to take in these children - against my husband's will - because they are my blood and I couldn't leave them on the streets," the 38-year-old said.

Masika said she used to make some of the children help her do farming work in the conflict-hit Ituri province until attackers invaded the fields in 2020 and killed her neighbours.

Since then, Masika and her husband have been selling charcoal in Butembo to support their extended family, yet most of the children under her care have had to drop out of school.

"I can't even hope for the government to help me raise them because they don't know that they exist ... the state has forgotten there are children who have lost parents to Ebola."

One such child is 13-year-old Suzanne, who has been selling sugarcane in Butembo after school since January 2019 when her mother died of the disease.

Her father cannot care for her due to mental health issues while her relatives have refused to help because they believe - mistakenly - that she is receiving support from charities.

"If my mother was still alive, I would not be living the life I am living today," said Suzanne, whose name has been changed to protect her identity. She said she could only afford to eat one meal a day and felt like she had been abandoned.

"It hurts when I see my friends playing games and I can't (join) because I have to rush back (to sell) my goods in town."

This story is one in a series supported by UNICEF