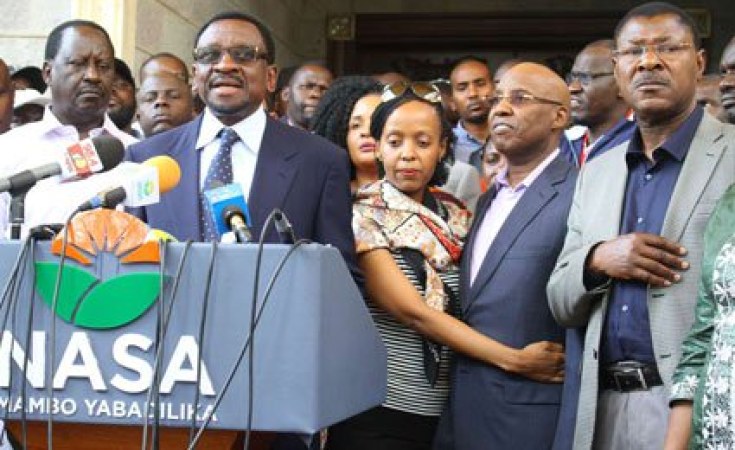 Businessman and presidential hopeful Jimi Wanjigi on Thursday kicked off his four-day Nyanza tour with a strong statement to his supporters - that he is the "last bullet" that Orange Democratic Movement (ODM) leader Raila Odinga has been talking about in his quest for power.

So strong were his statements on his first day in Mr Odinga's backyard that he even questioned President Uhuru Kenyatta's honesty in his 'handshake' deal with the ODM party leader.

Mr Wanjigi, who kicked off his grassroots campaign in Homa Bay, to woo Nyanza residents to support his bid for the ODM party presidential ticket, said his choice of the county was because of its history as the bedrock of Nyanza's politics, where critical declarations are usually made.

He portrayed Mr Odinga as one of his loyal allies, citing his long struggle to liberate the nation, but at the same time positioned himself as the best bet to fly the ODM flag in the 2022 General Election.

"You must remember what Baba has been telling you all this while about the last bullet he has in his quest for power. That last bullet is standing in front of you now asking that you hold his hands and support him for the presidency," said Mr Wanjigi.

Homa Bay, one of Mr Odinga's strongholds in Nyanza, was the businessman's first stop after arriving at the Kisumu International Airport, where he addressed the press.

He stated that his aspirations to lead the country on an orange party ticket have not eroded his friendship with Mr Odinga.

Mr Wanjigi further described Mr Odinga as his long term friend and said he would wish to end such a friendship because of political interests.

He narrated how they started their friendship in 1991, when the ODM leader was fleeing from the late President Daniel Moi's government during the fight for a multiparty system .

Mr Wanjigi said he helped the former Prime Minister in times of trouble, like when he took refuge in his office when the police were after him in 1991.

Likewise, the ODM leader later helped him when the police were after him.

"My history with Raila is very strong and I am very deep inside his circles," he said. "He would help me and I would do the same when either of us were in danger. Nobody can divide us. He stayed in my office for six hours when the government was after him."

Thirty years later, Mr Wanjigi said, he and Mr Odinga were still friends except the period when he supported Mr Kenyatta and William Ruto in their bid to take over power in the 2013 General Election.

He accused the President and DP of dividing him and Mr Odinga in 2012, but noted that their friendship was rekindled in 2014.

The businessman who played a critical role in the election of the Jubilee Party candidates in 2013 did not have kind words for the Head of State, accusing him of abandoning him.

"Asante ya punda ni mateke (loosely translated as 'A donkey's 'thank you' is a kick'). I had no idea that 27 years later, Raila would help me when the police were at my house," he said.

He challenged the President to accompany Mr Odinga to Central Kenya if the handshake deal was genuine.

"The President should have taken Raila to Central three years ago after the handshake if he meant well for the unity of the country. It is very difficult to change the narrative planted in the minds of the people of Central Kenya about Jakom (Mr Odinga)," said Mr Wanjigi.

Mr Wanjigi also accused Mr Kenyatta of running down the country and presiding over a government that has burdened Kenyans with taxes raising the cost of living.

Mr Wanjigi also drummed up support for the orange party, adding he is the most preferred presidential candidate in Central Kenya so he should be given a chance to lead the country.

His choice of Homa Bay as his first stop was significant as other presidential aspirants who have in the past competed with the ODM leader have had difficulties addressing residents of the county.

After the meeting, he proceeded to the ODM office in Homa Bay Town, where he held a brief meeting with party officials who asked for his help in strengthening the party in Homa Bay County.

Some of the officials said Mr Wanjigi is welcome in Homa Bay on condition that Mr Odinga remains their choice presidential candidate.

"You are free to campaign in Nyanza but remember that this is the political bedrock of Raila Odinga," Mr Tuko told him.

Mr Wanjigi will tour Migori and Nyamira on Friday and Siaya, Mr Odinga's home-county, on Saturday.

He is also scheduled to engage the Ker (leader) of the Luo Council of Elders, Mr Willis Otondi, during his tour, which he will end on Sunday with a service at St Teresa's Catholic Church in Kibuye, Kisumu County.