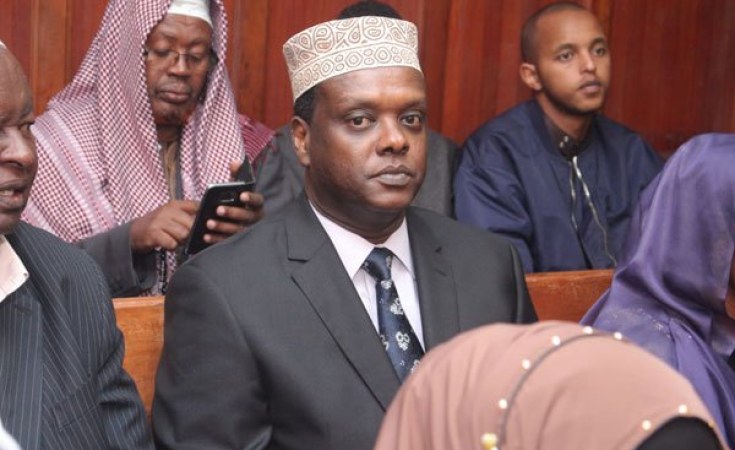 He should have been, three years ago. Instead, he stares at jail time should he fail to pay a fine for money he misappropriated when he served as Cabinet secretary for Sports and Culture.

It should never have been this way. Initially sacked as Sports Cabinet Secretary in January 2018, Wario, like several of his colleagues initially in Cabinet, fell on softer ground after the President deployed him to Vienna. There, he would be Kenya's permanent representative to the UN in Vienna, as well as serve as ambassador to Austria.

After vetting by the National Assembly, Wario was declared fit to serve. He would be among 13 diplomats to be deployed at that time.

At a State House function to officially appoint them, President Kenyatta told the group later in June that he trusted their professional experience would serve the country better.

"I expect a great deal from you to achieve our agenda. We expect much more than the routine diplomatic relations. I expect results that are better," the President told the new ambassadors.

"You are the voice of our country through engagements that promote good partnerships in trade, investment and the blue economy."

Little did we know Wario's seed planted two years earlier was germinating into a scandalous blot on his reputation. On Wednesday, the magistrate said Wario was guilty of abuse of office and was liable for punishment in the misuse of Sh55 million meant for the Kenyan Olympics Team in Rio de Janeiro, Brazil. The theft happened under his watch as Sports Cabinet secretary.

The case may have marked an important point in the fight against corruption: Big fish rarely get caught. But it may also permanently shut the door on his diplomatic career.

When he was arrested on October 18, 2018 -- he actually presented himself to a police station and was detained -- he had already been accepted by Austria to be Kenya's new envoy. Vienna had, by then, sent him an agrément, a diplomatic document that sort of acts as an 'acceptance certificate' for new envoys. He told the police he had already packed his bags and was due to fly out to report to the new station.

Having a whiff corruption, Wario's presence in government was no longer tenable and President Kenyatta sacked him again in May 2019. His place in Vienna was taken by Robinson Njeru Githae, a former Finance Minister who had been deployed to Washington DC.

Now a forgotten man, Wario fought his court battles as the world moved on. His case, like many, dragged on, as parties filed technical reasons to delay the case. He had no escape, however.

On Wednesday, the magistrate said he was guilty of abusing his office in connection to the Sh55 million Rio 2016 Olympics scandal.

Wario, together with ex-National Olympic Committee of Kenya (Nock) official Stephen Soi, are also facing a mandatory fine equal to two times the amount of the benefit or loss suffered by the public as a result of their conduct.

Is his a grass-to-grace-to-grass story? Perhaps the fines or prison times will not impoverish him. But as the first Cabinet secretary in President Kenyatta's government to be found guilty of corruption, it could indelibly mark him as greedy.

When he was born 50 years ago, in Moyale, his family was poor, subsisting on a few domestic animals and surviving by the grace of well-wishers. An entry into a directory for Chevening Scholarship beneficiaries says his secondary education was funded by a charity organisation after it learnt of his conditions. He had 10 other siblings.

And he was a bright student, the entry says, which allowed him to pass with good grades and join the University of Nairobi, under a national government scholarship. He later studied in the UK under the Chevening Scholarship programme.

An alumnus of the University of East Anglia, and an anthropologist by profession, Wario's life had largely been out of the public eye as he worked for museums in the UK and later in Kenya.

Things looked up in 2013 when President Uhuru Kenyatta appointed him Sports CS. Being from a pastoralist and long marginalised group -- the Borana community -- his appointment to the Executive at the age of 43 years was a big achievement.

He joined the Cabinet as a technocrat and when the pastoralist communities were complaining of being marginalised by successive governments.

All was well until July 2016 when reports of mismanagement of the Kenyan team at the Rio Olympics surfaced, with Wario being bashed on social media and blamed over the multi-million-shilling financial scandal.

The evidence tabled in court shows he abused his office by ordering inclusion of three people into the list of the delegation that was supposed to accompany Team Kenya to Rio.

The beneficiaries are named as Adan Omar Enow, Richard Abura and Monica Sairo. The three travelled on visas issued by the Brazilian embassy and were not part of the delegation though they ended up as part of Team Kenya.

Wario accompanied the Kenyan athletes to Rio de Janeiro, Brazil, for the games and returned home with 13 medals -- six gold, six silver medals and one bronze.

The medals are celebrated as the best Olympic performance in Kenya's history, though the athletes returned Nairobi silently with no celebrations.

To his credit, Wario used to grace almost all events falling under his docket.

At the start of the trial, he used to avoid the cameras, but he later stopped, perhaps after learning that the journalists' attention on his presence in court was not waning.

During the court trial, the slender and towering man rarely mingled with his five co-accused persons. When he was not reading a newspaper, he was scrolling his mobile phone or talking to his lawyer.