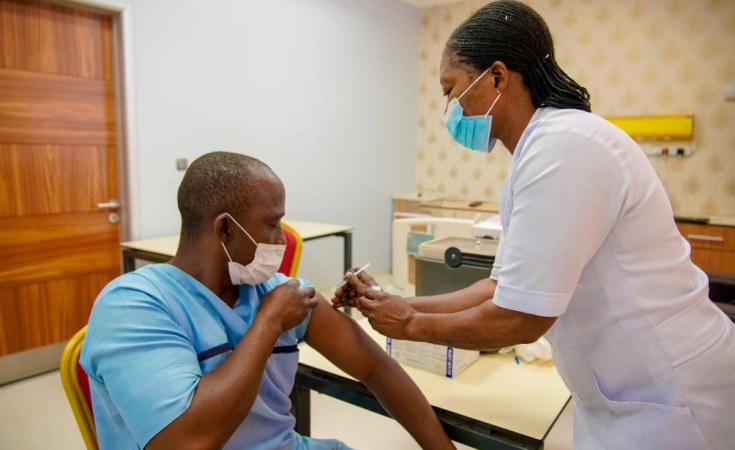 WHO Africa Region
At Nizamiye Hospital, a private facility in Abuja, a nurse administers a second COVID-19 dose to a recipient.
UN News Service

Health leaders agree that a world without COVID-19 will not be possible until everyone has equal access to vaccines. More than 4.6 million people have died from the virus since it swept across the globe from the beginning of 2020, but it's expected that the rate of people dying will slow if more people are vaccinated.

Developed countries are far more likely to vaccinate their citizens, which risks prolonging the pandemic, and widening global inequality. Ahead of a dialogue at the UN on Monday between senior United Nations officials UN News explains the importance of vaccine equity.

What is vaccine equity?

Quite simply, it means that all people, wherever they are in the world, should have equal access to a vaccine which offers protection against the COVID-19 infection.

WHO has set a global target of 70 per cent of the population of all countries to be vaccinated by mid-2022, but to reach this goal a more equitable access to vaccines will be needed.

Dr Tedros Adhanom Ghebreyesus, the Director-General of the World Health Organization (WHO) said vaccine equity was "not rocket science, nor charity. It is smart public health and in everyone's best interest."

Why is it so important?

Apart from the ethical argument that no country or citizen is more deserving of another, no matter how rich or poor, an infectious disease like COVID-19 will remain a threat globally, as long as it exists anywhere in the world.

Inequitable vaccine distribution is not only leaving millions or billions of people vulnerable to the deadly virus, it is also allowing even more deadly variants to emerge and spread across the globe.

Moreover, an unequal distribution of vaccines will deepen inequality and exaggerate the gap between rich and poor and will reverse decades of hard-won progress on human development.

According to the UN, vaccine inequity will have a lasting impact on socio-economic recovery in low and lower-middle income countries and set back progress on the Sustainable Development Goals (SDGs). According to the UNDP, eight out of ten people pushed into poverty directly by the pandemic are projected to live in the world's poorest countries in 2030.

Estimates also suggest that the economic impacts of COVID-19 may last until 2024 in low-income countries, while high-income countries could reach pre-COVID-19 per capita GDP growth rates by the end of this year.

Not according to Dr Tedros, who said in April this year that "vaccine equity is the challenge of our time... and we are failing".

Research suggests that enough vaccines will be produced in 2021 to cover 70 per cent of the global population of 7.8 billion. However, most vaccines are being reserved for wealthy countries, while other vaccine-producing countries are restricting the export of doses so they can ensure that their own citizens get vaccinated first, an approach which has been dubbed "vaccine nationalism". The decision by some nations to give already inoculated citizens a booster vaccine, rather than prioritizing doses for unvaccinated people in poorer countries has been highlighted as one example of this trend.

Still, the good news, according to WHO data, is that as of September 15, more than 5.5 billion doses have been administered worldwide, although given that most of the available vaccines require two shots, the number of people who are protected is much lower.

Which countries are getting the vaccines right now?

Put simply, the rich countries are getting the majority of vaccines, with many poorer countries struggling to vaccinate even a small number of citizens.

According to the Global Dashboard for Vaccine Equity (established by UNDP, WHO and Oxford University) as of September 15, just 3.07 per cent of people in low-income countries have been vaccinated with at least one dose, compared to 60.18 per cent in high-income countries.

The vaccination rate in the UK of people who have received at least one vaccine dose is around 70.92 per cent while the US is currently at 65.2 per cent. Other high-income and middle-income countries are not doing so well; New Zealand has vaccinated just 31.97 per cent of its relatively small population of around five million, although Brazil, is now at 63.31 per cent. However, the stats in some of the poorest countries in the world make for grim reading. In the Democratic Republic of the Congo just 0.09 per cent of the population have received one dose; in Papua New Guinea and Venezuela, the rate is 1.15 per cent and 20.45 per cent respectively.

What's the cost of a vaccine?

Data from UNICEF show that the average cost of a COVID-19 vaccine is $2 to $37 (there are 24 vaccines which have been approved by at least one national regulatory authority) and the estimated distribution cost per person is $3.70. This represents a significant financial burden for low-income countries, where, according to UNDP, the average annual per capita health expenditure amounts to $41.

According to the vaccine equity dashboard, without immediate global financial support, low-income countries would have to increase their healthcare spending by a staggering 57 per cent to meet the target of vaccinating 70 per cent of their citizens.

What has the UN been doing to promote a more equitable access to vaccines?

WHO and UNICEF have worked with other organizations to establish and manage the COVID-19 Vaccine Global Access Facility, known as COVAX. Launched in April 2020, WHO called it a "ground-breaking global collaboration to accelerate the development, production, and equitable access to COVID-19 tests, treatments, and vaccines".

Its aim is to guarantee fair and equitable access for every country in the world based on need and not purchasing power.

Currently, COVAX numbers 141 participants according to the UN-supported Gavi alliance, but it's not the only way that countries can access vaccines as they can also make bilateral deals with manufacturers.

Will equal access to vaccines bring an end to the pandemic?

It's a crucial step, obviously, and in many richer countries, life is getting back to some sort of normality for many people, even if some pandemic protocols are still in place. The situation in less developed countries is more challenging. While the delivery of vaccines, provided under the COVAX Facility, is being welcomed across the world, weak health systems, including shortages of health workers are contributing to mounting access and distribution challenges on the ground.

And equity issues don't disappear once vaccines are physically delivered in country; in some nations, both rich and poor, inequities in distribution may still persist.

It's also worth remembering that the imperative of providing equal access to health care is, of course, not a new issue, but central to the Sustainable Development Goals and more precisely, SDG 3 on good health and well-being, which calls for achieving universal health coverage and affordable essential medicines and vaccines for all.

Dr Tedros Adhanom Ghebreyesus, the Director-General of the World Health Organization (WHO), Achim Steiner, the head of the UN Development Programme (UNDP, and Vera Songwe, who runs the UN Economic Commission for Africa (ECA) will take part in a conversation on vaccine equity as part of the SDG Moment. Watch here on UN Web TV.