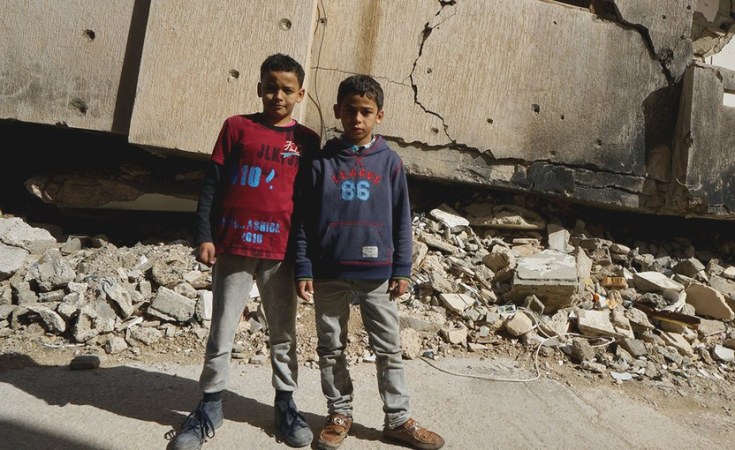 A decade of conflict has weighed heavily on Libya, a country with a rich cultural heritage and home to a generation of youth with dreams of successful careers and economic security. Despite a recent let-up in the fighting, life has not returned to normal for young graduates like Ahmad and Israa, who are struggling to build a life against a backdrop of conflict, insecurity, and a global pandemic.

Ahmad, a petroleum engineering graduate, had planned for everything; except that the conflict in his country would drag on for a decade. "I was not very focused on what was going on outside the Faculty walls. My degree was my only focus", he explains. "You can imagine how hard it was for me when I completed my degree and realized that my diploma had essentially lost its value. It was a shock", Ahmed recalls, sat in his humble living room.

Sitting in front of him, his mother's gaze is full of both great fondness and nagging worry, "He still hasn't found a job yet, despite all his efforts", Yasmine says sadly.

Ahmad joined the engineering Faculty in Khoms, a coastal city halfway between Tripoli and Misrata, with one goal in mind; In five years, and not one more, he would become an engineer, "just like my father," he recalls proudly.

Indeed, he successfully followed the path that many had taken before him in the oil-rich country: he graduated, in 2019, with a degree in petroleum engineering.

But, meanwhile, as he studied and made plans for his future, the bitter conflict in Libya raged on. Over the years, the conflict forced countless families to flee their homes, losing both social support and work opportunities. Many families like Ahmad's are still wrestling with the debilitated economy, a political process mired by divisions, increasing prices, and a lack of liquidity. And the hostilities kept coming, one after another, taking a toll on people's lives and disrupting normal services such as healthcare, availability of clean water, and electricity.

Employers outside Libya associate us with conflict; I have sent so many CVs and never received replies

"The petroleum industry has been one of many affected sectors by the decades-long conflict", explains Aisha Suliman, who monitors the livelihood program of the International Committee of the Red Cross (ICRC) in Khoms. The ICRC program supports Libyans, many of them women, who want to start small businesses to provide for their families. And also for their children who struggle to find work.

"People who used to be employed in the petroleum field found themselves without work as foreign companies left the country because of the conflict. On top of that came COVID-19 that shrunk the global economy and the job market.", said Aisha.

Another sector hard-hit by the ongoing conflict is the public sector. According to a World Bank Report published in 2015, this sector has traditionally been by far Libya's biggest employer, hosting 85% of the total active labor force, and 93% of active women.

"Youth today can feel compelled to turn to the private sector, but it can't absorb all those who used to work in the public sector", adds Aisha.

Israa, 34, an ICT graduate, has longed to work in administration since she obtained her diploma in 2012. So has a sister, Fatma, who also was her classmate.

Many public services, like health care centers, have been closed for years. There is no work; everything has stopped

What's more, their two brothers are also unemployed, except when they are able to pick up daily work. But, Israa explains, "the problem is that we never know when work will come". This leaves the four siblings relying on the social support their mother, a widow, receives each month.

Of course, work opportunities are even scarcer for all those displaced due to the conflict, who have to pay rent on top of all their expenses. Around 245,000 people still have not been able to return home and remain displaced inside Libya.

Reflecting on the last two years, Ahmad, perched on his mattress, contemplates his mother with a grounded calmness and determination. He remembers that the first year after his graduation, he took an additional course, still clinging to a sense of hope. This was a feeling he lost by the following year. Today, he says that he has found it again, without explaining why. He wants, he said, to register for a master's degree. "I don't want to waste any more time."

*Names have been changed