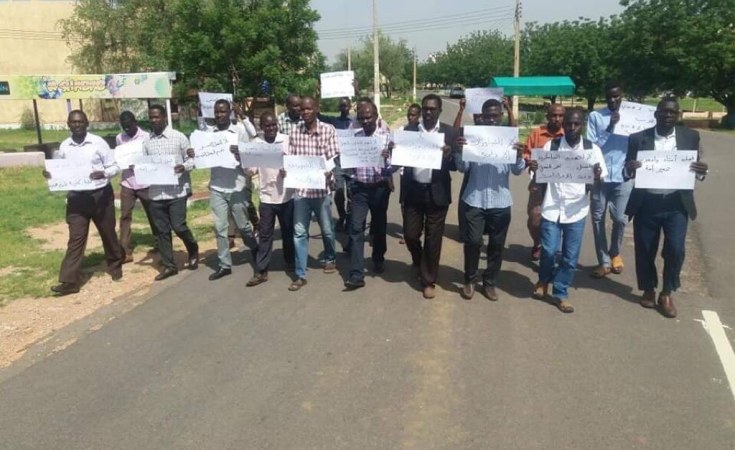 Port Sudan — The protests over the Eastern Sudan Track of the Juba Peace Agreement escalated further as the High Council of Beja Nazirs* closed ports and markets, suspended revenues, and continued its blockages of key highways in eastern Sudan. Other eastern Sudanese community leaders and activists disagree with the Beja nazirs' approach.

Yesterday, the High Council of Beja Nazirs announced that they closed the Bashayer Petroleum port, the Suakin port, and the duty-free markets in Red Sea state and suspended the ports' revenues to the Bank of Sudan on the third day of their protest against the contents of the Eastern Sudanese Track of the Juba Peace Agreement.

Other demonstration measures had already been taken as part of the protest.

In an interview with Radio Dabanga, spokesman for the Beja Nazirs Council Abdallah Obshar confirmed that eastern Sudan is organising civil disobedience actions by blocking highways linking Red Sea state with Kassala and El Gedaref, and the continued closure of the Southern Port.

He explained that their most prominent demands are to cancel the Eastern Sudan Track which is part of the of the 2020 Juba Peace Agreement, and adopt a new negotiating platform for eastern Sudan. The high council also demands the formation of a government of technocrats. "We demand a competent government as the current partisan government is too slow in responding to our demands," Obshar said.

Beja nazirs have opposed the Eastern Sudan Track since it was agreed upon by the Sudanese government and the Sudan Revolutionary Front rebel alliance in Juba in February 2020.

The Sudanese government notified the eastern Sudanese coordinators that the arrival of the ministerial delegation headed by the Minister of Foreign Affairs Maryam El Sadig, which was scheduled to arrive in Port Sudan on Sunday, has been postponed until another time.

Obshar explained that the government had informed them of the postponement of the arrival of the FA delegation under the pretext of a malfunctioning aeroplane that would transport them from Khartoum to Port Sudan.

He downplayed the impact that the arrival of the federal delegation would have on dissuading the protesters from their demands and said that the government had received their demands earlier in Arkaweet. Obshar called for government decisions to resolve the crisis rather than sending delegations.

In a public address in Suakin, Tirik accused Minister of Cabinet Affairs Khaled Omar and Head of the Baath Party Ali El Sanhouri of having called for the forceful removal of protesters through the use of firearms during a meeting of the National Security and Defence Council. He said that Lt Gen Abdelfattah El Burhan, the Sudanese Armed Forces (SAF), the RSF, the police, and the GIS refused this.

The forum said that it "has no objection to any official communication that leads to a political and radical solution to the problem of eastern Sudan and ensures the achievement of the demands raised without procrastination".

Opinions differed not only with regards to the federal government delegation.

The El Butana National Movement, the High Council for Native Administration in eastern Sudan, Resistance Committees in Red Sea state, Kassala, and El Gedaref, and the El Gedaref Salvation Initiative denounced the blocking of the highways and accused the protesters of "closing the East".

Leaders of the El Butana National Movement accused what they called affiliates of the former regime of being behind the road closures. They called for addressing the shortcomings in the Eastern Track by holding a comprehensive consultative conference at the earliest opportunity.

The Resistance Committees in El Gedaref also accused the government of being lenient with what they described as the remnants of the former regime who blocked a number of national roads in the state.

* A nazir is a state-appointed administrative chief of a tribe or clan, according to the Native Administration system in Sudan.