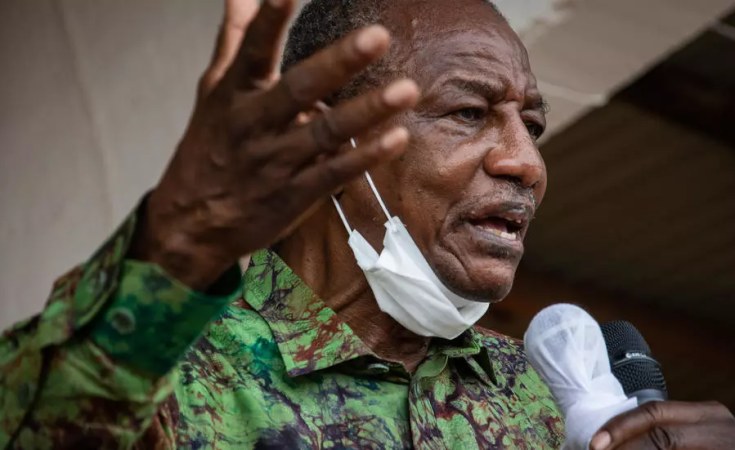 Guinea's coup-makers on Friday said it would not yield to pressure by the Economic Community of West Africa States (ECOWAS), and allow President Alpha Conde to leave the country, weeks after he was overthrown.

On Friday, Ghana's President, Nana Akufo-Addo led a delegation to Conakry to convey the bloc's decision on Guinea to the Military Junta, and demanded the immediate release of Conde.

The Military Junta in a statement read on State Television, said "The former president is and remains in Guinea. We will not yield to any pressure."

The ECOWAS Chair, President Akufo-Addo and President Ouattara, who represented the 15-member of ECOWAS, held separate meetings with Colonel Doumbouya and Conde in Conakry, without much progress.

President Akufo-Addo who spoke to the media said "We have had a very frank and fraternal meeting with Doumbouya and his collaborators. I think that ECOWAS and Guinea are going to find the best way to move forward together."

ECOWAS, among others, had demanded the Country's return to constitutional rule after the special military forces seized power, arrested and detained Conde.

ECOWAS on Thursday, 16 September, 2021 agreed to freeze the financial assets of the coup-makers and their families and imposed travel ban on them.

ECOWAS, two days after the coup, suspended Guinea's membership, and demanded a return to constitutional order.

The bloc also demanded the immediate release of Conde at an extraordinary summit held virtually on Wednesday and agreed to send a high-level mission to Guinea on Thursday to access the situation.

ECOWAS decision came after the military coup sparked condemnation from some world leaders, including regional and continental bodies such as the African Union and the United Nations.

But back in Guinea, there were jubilations in some parts of the capital, Conakry, where residents turned out on the streets to praise and hail those soldiers who had removed Professor Conde.