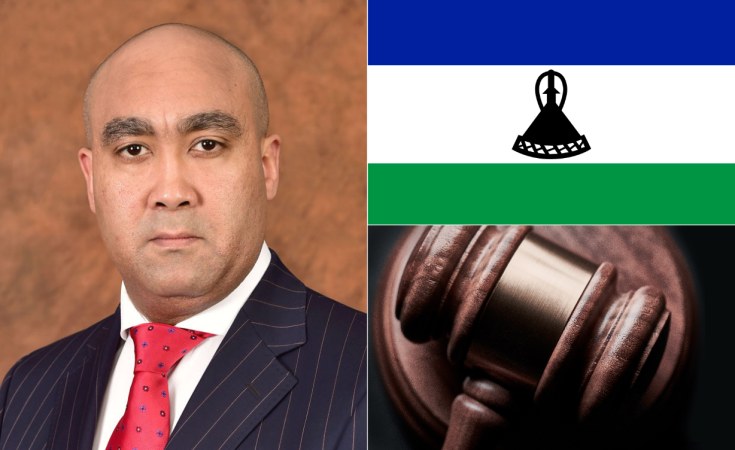 This according to the Director of Public Prosecutions (DPP), Hlalefang Motinyane. Mr Abrahams, the lead prosecutor in five high-profile cases, had last week announced that he was quitting because of lack of pay. He told Justice Charles Hungwe that he was withdrawing over "administrative and professional differences" with the government.

DPP Motinyane had since been making frantic efforts to have the government pay Adv Abrahams his dues. She told Judge Hungwe this week she was certain that Adv Abrahams would be back in court by Monday.

However, the Lesotho Times has learnt from highly placed sources that Adv Abrahams will only return if the government pays him what it owes him before then.

"Chances are high that Shaun will return on Monday because the DPP is working tirelessly to ensure that the issue of his payment is resolved," a source said this week.

"Shaun is adamant that he will only return when his grievances are addressed. It is not yet certain whether or not he will be returning for this trial only or all those that he had previously been hired for."

The trial was set to run throughout this week and next week. However, Justice Hungwe on Monday had to postpone it to allow DPP Motinyane to resolve her challenges with Adv Abrahams.

Adv Abrahams had on 6 September 2021 announced his resignation from all the five high profile cases that he is prosecuting over what he called "administrative and professional differences" with his client, the government.

His told Judge Hungwe his resignation was with effect from 1 September 2021.

Adv Abrahams's quitting put the high-profile cases he is prosecuting in serious jeopardy since he had done a lot of work in preparing for court, a fact acknowledged by DPP Motinyane. She has since been working around the clock to have Adv Abrahams grievances resolved. She had asked the court to allow her time to negotiate with Adv Abrahams to stay and have him resume his work this week.

And on Monday, the DPP said some unanticipated "bureaucratic hurdles" had delayed the negotiation process. She therefore promised he would now be available next Monday.

"When I last addressed you my Lord, I took the court into my confidence and reiterated that there were issues that needed to be ironed out between my office and the lead prosecutor, Advocate Shaun Abrahams, in this matter," DPP Motinyane said on Monday.

"I had anticipated that he would represent the crown in this matter. However, due to unforeseen circumstances and the bureaucratic hurdles that I did not anticipate, he will only be available to prosecute the matter on Monday. I have reconfirmed with Adv Abrahams and he has accepted to get back on brief... We are at the final stage of our issues, so on Monday there will be no problems."

"As I told you, I withdrew for professional reasons. I will return when the issues are resolved," Adv Abrahams said.

They are all facing five counts which include murder, conspiracy to murder and risk of injury or death. Lt-Gen Kamoli faces additional charges of inciting murder and obstructing the course of justice.

There are 72 witnesses in the case who include former prime ministers, Pakalitha Mosisili and Thomas Thabane.

The first witness to take the stand was Lance Corporal Mokete Halahala. The second witness, Retired Colonel Thato Phaila, is now expected to undergo re-examination of his evidence on Monday by Adv Abrahams.

The other case being prosecuted by Adv Abrahams involve Lt-Gen Kamoli, who is accused alongside Major Pitoso Ramoepane, Captain Litekanyo Nyakane, Sergeant Malefane Heqoa and Corporal Mohlalefi Seitlheko for the simultaneous bombings of former First Lady 'Maesaiah Thabane and former Commissioner of Police Khothatso Tšooana's houses on 27 January 2014. This trial was postponed to 15 November 2021 to allow an appeal lodged by the accused to be heard. The accused appealed after Justice Hungwe dismissed their application to have their trial heard by a magistrate court. The Court of Appeal will sit from 11 October 2021 and deliver judgements on 12 November 2021.

In another matter being handled by Adv Abrahams, four police officers; Senior Superintendent Thabo Tšukulu, Senior Inspector Mothibeli Mofolo, Inspector Mabitle Matona and Sub-Inspector Haleokoe Taasoane are accused of the 26 March 2016 murder of their colleague, Police Constable Mokalekale Khetheng. Justice Hungwe has set down the trial to continue from 15 to 26 November 2021.

Justice Sakoane is presiding over the treason and murder trial of politicians Mothetjoa Metsing and Selibe Mochoboroane in which they are accused alongside Lt-Gen Kamoli, Captain Nyakane as well as Lance Corporals Leutsoa Motsieloa and Motloheloa Ntsane, of involvement in the attempted coup of 30 August 2014.

The 10 soldiers allegedly strangled Lekhoele Noko, Molise Pakela and Khothatso Makibinyane at Setibing in rural Maseru on 16 May 2017 and dumped them in the Mohale Dam.

They allegedly kidnapped and murdered the three men after the trio had just been released from police custody where they were detained in connection with a shooting incident that occurred at the Maseru border gate on 13 May 2017.

Adv Abrahams had not yet officially withdrawn from these two matters before Justices Sakoane and Mokhesi because they were set down for 27 September 2021 and 1 November 2021 respectively. He perhaps hoped his issues would have been resolved by then.