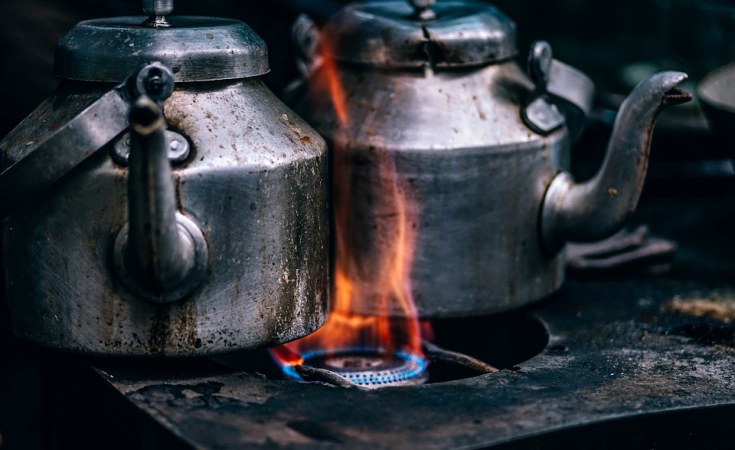 Liquefied Petroleum Gas (LPG) or cooking gas is now beyond the reach of average Nigerians as many have turned to charcoal or firewood.

A kilogramme of cooking gas is now N625 or more, depending on the location, forcing many households and eateries, especially in urban centres to seek alternative means of cooking.

Firewood and charcoal mongers are now smiling to the banks with the attendant rise in deforestation.

Experts have warned relevant stakeholders on the consequences of the shortage on the health of residents and the environment at a time global warming is taking a toll on different parts of the world.

Despite a proven estimate of 206.53 trillion standard cubic feet of natural gas deposits in Nigeria as of June 2021, the price of cooking gas has surged higher beyond the reach of Nigerians, with five increases recorded in three months, Daily Trust reports.

Our reporters in a survey on Tuesday observed that the prices of various kilogrammes of LPG have surged more than 50 per cent, with a 12.5kg content selling for N7, 800 or more, rising from N6, 500 in less than a month.

Some of the gas users who spoke to our reporters during the market survey in Lagos, Abuja, Kano, Kaduna and Nasarawa states, among others, said the situation had forced scores of poor Nigerians to resort to using charcoal-fuelled stoves to cook.

It was learnt that those buying in lower volumes like 3kg, 5kg, 8kg and 10kg, paid over 50 per cent more than they did in March.

This sharp decline, according to dealers, might lead to further upward pressure on the retail prices of the product.

However, the larger part of 47,224.346MT was imported by NIPCO, Matrix, Algasco, Techno Oil, Prudent, A. A Rano, and Stockgap. The imports were more from the USA; Algeria and Equatorial Guinea in Africa.

As of Tuesday, a 5kg cylinder volume of cooking gas was sold for N3, 250 in Abuja.

Some gas users blamed the federal government for its inability to control the price in the open market.

Mrs Vivian Kogi, a resident of Lagos described as worrisome, the rising cost of cooking gas, which she said had made many go back to use of coal and firewood because kerosene was also expensive.

"With the way things are going, the cost of gas may rise to N1, 000 per kilogram by end of the year," she predicted.

Mrs Kate Okpalefe, who lives in Ketu Ijanikin, said many of her neighbours had resorted to the use of charcoal pots because they could no longer afford gas.

Aina Babatunde, a taxi driver, said he abandoned his gas cooker for a charcoal stove. "Many of us can't buy cooking gas anymore; government should do something about it. The price keeps increasing every day."

A restaurateur in Abuja, Hajia Muinah Fagbohun, decried the increase, saying her daily revenue had dropped.

"The government should please prevail on gas marketers to bring down the prices of gas," she said.

Mrs Salamatu Bello, a housewife said she bought a 3kg volume at N2, 750 at a refilling plant, instead of the N2, 200 she paid in August.

"That little gas has increased by N550 yesterday when I bought it at Karu. It is now difficult for us to use gas and the cost of kerosene is not helping matters," she said.

John Abu said he bought a 12.5kg gas content on Saturday for N7,800 in Nyanya, the highest record in that part of Abuja.

"It has never been so high like this before; I think we have to find a cheaper alternative, which may be the charcoal stove," he said.

In Kaduna, the price per kilogramme had risen from N320 to N600 within the time under review.

Musa Mando, a bookseller, called for price control, saying cooking gas was now beyond the reach of the masses.

Abba Ibrahim of Hotoro Quarters, in Kano, said he had switched to using the kerosene stove.

Daily Trust reports that marketers had resorted to various explanations for the hike as they blamed the foreign exchange (forex) crisis.

Some of them said low supply and a rise in Value Added Tax (VAT) on gas import were to blame.

Malam Sagir Bello Baba, a cooking gas seller in the Tarauni area of Kano said they never experienced such a rapid hike in prices of cooking gas before.

"Our business, our source of livelihood is crumbling. Government should do something," he said.

Aminu Isiaka, a major dealer at Kurnan Asabe, Kano, said the implications are many.

"Many people have been pushed out of business. There is also serious pressure on forests because firewood mongers are raiding forested areas cutting down trees.

"And most importantly, the development is a serious setback to the green initiative of the federal government. People have been sensitised in the last few years to stop felling trees and after resistance, many started using gas but it is now beyond their rich.

"We know there was no subsidy on gas and I wonder where the problem lies," he said.

Mr Sylvanus Ogbonna, who sells cooking gas in the Ikeja area of Lagos, attributed the hike in the price of cooking gas to the implementation of a 7.5 per cent tax on imported LPG.

"There is no constant price from the last two weeks... The price is changing because of the nature of our supplies and the VAT increase," he said.

The Secretary, Liquefied Petroleum Gas Retailers of Nigeria (LIPGAR) in Kano, Alhaji Muhammad Omede, who blamed the forex crisis, said the government should always consider the public when making policies.

A management source with one of the four major importers said: "There are many issues involved. For the imported liquefied natural gas, the price is dominated by the dollar. So the more the naira is devalued, the higher the prices will continue to rise.

"The federal government re-introduced value-added tax (VAT) that was suspended about three years ago in a bid to reduce the price of LPG. The government is looking everywhere for revenue and they were forced to reintroduce VAT.

"But the worst of the government action was that they backdated these VAT to 2020, which has now left the four major importers with huge debt amounting to over N1 billion."

The source also said due to the backdated VAT, most companies were not importing, as everyone depends on supply by NLNG).

On his part, the Executive Secretary of the Nigerian Association of Liquefied Petroleum Gas Marketers (NALPGAM), Mr Bassey Essien, said Nigeria consumed about one million MT of cooking gas annually and that 65 per cent of this was sourced abroad.

"We, as marketers, are also saying that the NLNG and other gas producers should domesticate the production chain for cooking gas by dedicating sufficient quantity for domestic consumption," he said.

"Upstream gas contracts are usually priced in dollar, even for gas supply to the domestic market. But due to the scarcity of foreign exchange in recent years, gas suppliers have accepted payment in naira by the gas processors and other wholesale gas buyers, usually at the official exchange rate."

Kyari stated this recently when he visited the management of the Department of Petroleum Resources (DPR) in Abuja.

"Today, this country is under-supplied with gas. I can tell you that we are having difficulty feeding our network across the country with gas. Every day, it is a trouble to deliver gas. Once your supply is weak, it will affect pricing," he said.

He, however, said the corporation was working with other sister agencies on a strategy to expand its network of availability, which would subsequently lead to gas directly delivered to homes of end-users.

"If we do this, all cylinders will not be of any use. That is why I don't see them used in many developed countries. When we can power thermal gas plants across the country and very close to the users, ultimately, homes will be run with electric cookers and utensils and that way, you will have less need for cylinders.

"We are transiting and we will continue to add more volume into the market so that we bring down the prices," he said.