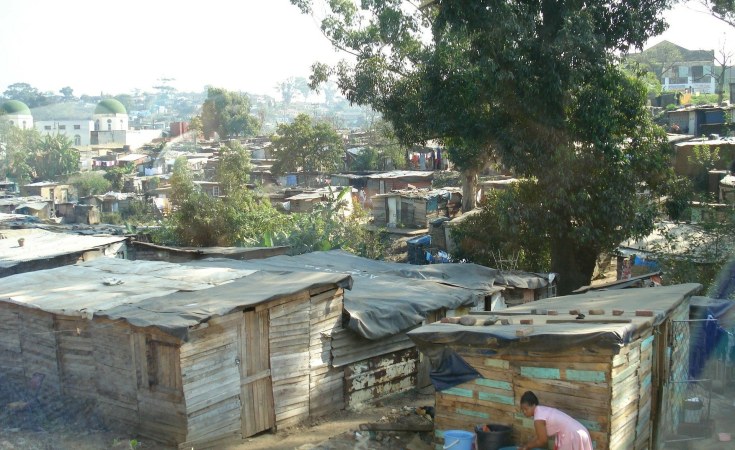 Many were left homeless following the recent scaling up times of the demolition of many slums across the FCT by the FCTA in apparent violation of the Abuja Masterplan.

Tears creaked down many faces. There was also anger and outburst of emotion as the ruggedly built bulldozer, numbering about half a dozen, with their characteristically large tyres, blitzed through some of the marked structures in Iddo Sarki on the corridor of the Nnamdi Azikiwe International Airport, Abuja.

The bulldozer operators from the Abuja Environmental Protection Board (AEPB) neither exhibited signs of emotion nor broke sweat as they carried out the task.

And after seven hours, about 350 of those structures, including a church, several blocks of hostels occupied by students of the University of Abuja and many buildings, at different stages of development were flattened into a mass of debris.

However, the demolition exercise was not restricted to Iddo Sarki. Since the start of the raining season, there have been massive demolition of shanties in Mpape, Lugbe-Across, Mpape and Sabo Iddo.

About 349 illegal structures were demolished at Lugbe- Across which is also on the precinct of Nnamdi Azikiwe International Airport, Abuja.

The demolition exercise that lasted for several hours was codenamed "2021 mother of clean-ups".

The scale of operation in Mpape, a shanty located on a hilltop overlooking the high-brow quarters of Maitama, where over 2,000 structures were pulled down was even startling.

At Iddo- Sarki, Oja Ignatius Ugu, a native of Benue State could not mask his anger over the demolition of the four-room apartment that was sheltering his wife, a 400 level student of the University of Abuja and their young daughter.

With his wife harmoniously raining curses in the background, he ripped at the FCTA for failing to compensate them after rendering them homeless.

When asked if had a genuine land document to back his claim to the land, he said the only document he had was a paper agreement he got from the indigenes that sold the land to him.

"We are bona fide citizens of this country and they are treating us as animals-nothing like settlement after all the stress to build a house. How can you demolish someone's house in the name of building on government land? Is the government not for us? This is not fair. As I am talking now, I don't have any job and a place to go to. All my plan was as soon as I finished this house, I would rent it out to support my wife and daughter's education.

"Did you know how I built that house? Did you know how many blocks I pushed? How many times my wife pushed wheelbarrows to ensure we raised that house so that in the future we can let it out to generate rent for us? You apply for job, nobody will employ you, you apply for civil defence, Road Safety, no one will offer you a job," Ugu lamented.

A mother of three, Mrs Rabiat Abdul-Aziz, also could not conceal the fate of the family.

She said her husband, Yusuf Abdul-Aziz brought the piece of land on which their demolished house was built from one of the Iddo locals.

She also lamented that her husband was facing hardship as he barely eked more than N1,000 a day from his mechanic work, making life difficult for the family.

Another victim, Isaac Alluh, said he bought his parcel of land measuring 50 by 50 metres two years ago from a Gbagyi man for N100,000.

He said the man in question even sold land to many unsuspecting victims in the community claiming his ancestors were the owner of Iddo Community.

The Ayodele twins, Innocent and Marvellous also expressed outrage at the demolition of the Christ Apostolic Church, where their father was the ministering pastor.

Apart from the Church, the family house built next to the place of worship was also demolished.

Innocent, who spoke on behalf of the family said that although the land was not captured on Abuja Geographical Information System (AGIS), they had architectural, engineering and survey approvals before embarking on building.

Their father reportedly started the Church project in 2018 after getting insight that he could buy a parcel of land for development and after making all the necessary findings as par the validity of the land.

He asserted that they followed the advice of their engineers before they started structural development.

Innocent also stated that the locals who sold the land to the family assured them that the legal case over the land had been won in the court.

"I was in office when I was called that they had started demolition. Personally I think if things like this should be done, there should be a warrant sanctioning this operation in way and informing the residents that this exercise would be carried out today. I think we are in a working system and Nigeria is a democratic nation," Innocent said.

When pressed further if they submitted their building plan for approval, he conceded that a building approval can only be submitted if the land is captured at AGIS.

"If you notice from airport upward till Lugbe they are captured on AGIS. When demolition happened they actually fenced them out. But here is not captured on AGIS. I don't think the contention here is not about being on AGIS or getting approval. It is about allocation and sort of that which the people here confirmed and is being captured and already there was a case brought before the court," he said.

He appealed to government to always consider the citizens who are powerless as well as to assist in providing temporary shelter for the displaced people.

However, the Chairman, FCT Ministerial Committee on City Sanitation, Mr Ikharo Attah said the demolition exercise was constrained by the alarming scale of illegality along the corridor in contravention of the FCT urban and regional planning laws.

He regretted that the buildings were raised without the consent of FCT Administration, through its Department of Development Control (DDC).

He also said the illegal development was already heading towards the strategic International Airport Road in stark contravention of the Abuja Masterplan.

Attah also accused the developers of purchasing land illegally from local chiefs without valid papers and building for without approved plans.

"The first notice we gave to the people was to stop buying land from the natives. The chiefs have denied selling land to anybody.

"Anyone who buys land from the local chiefs is doing that in contravention of the law and such persons will bear the brunt. Our work is to remove illegalities. Those who are affected can seek justice against those that sold the land," he said.

He described all the land in contention as illegal as the developers had no proof of ownership to the titles in either AGIS, Gwagwalada Area Council, AMAC or Bwari Area Council.

He further explained that the FCT Minister had reiterated commitment to the ongoing exercise, saying it was part of measures to prevent the nation's capital from becoming a slum.

Also the Secretary FCT Command and Control Centre, Peter Olumuji confirmed that the ongoing sanitation and demolition exercise had reduced the rate of criminality along the International Airport road.

Olumuji said that from the statistics recorded at the department, the demolition had dislodged most of the criminals that were hitherto holding the residents to ransom.