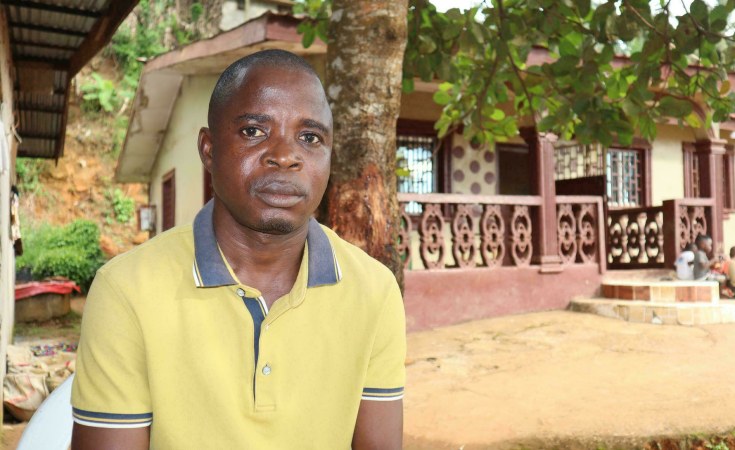 Darlington Porkpa / RFI
Peterson Sony, a survivor of the St. Peter's Lutheran Church massacre during Liberia's Civil Wart, was 16 at the time.
Radio France Internationale
By Darlington Porkpa in Monrovia

A Pennsylvania court in the United States found Colonel Moses Thomas, commander of the defunct Armed Forces of Liberia's elite Special Anti-Terrorist Unit, responsible for the 1990 massacre of over 600 civilians sheltering in the St. Peter's Lutheran Church in Monrovia, Liberia.

Four survivors of the massacre sued Thomas in 2018 in the U.S. District Court for the Eastern District of Pennsylvania, where he had been living since 2000.

In March 2021, lawyers for the plaintiffs, who are anonymous, filed nearly 2,000 pages of evidence with the court, arguing that Thomas commanded AFL soldiers who carried out the Lutheran Church Massacre.

The Center for Justice and Accountability (CJA), Debevoise & Plimpton LLP, and Blank Rome LLP are representing the survivors.

"This judgment is a key step towards achieving justice not only for our clients, but also for other survivors and victims of Liberia's civil wars," said Nushin Sarkarati, senior staff attorney at CJA.

Peterson K. Sony, 47, who was 16 on that fatal day, is the head of the Lutheran Church Massacre survivors. He insists the guilty verdict is not enough.

In an interview with RFI on the outskirts on Monrovia in Paynesville, he says survivors are gearing up to pressure the government to turn over Thomas to the United States authorities.

Thomas left the United States and returned to Liberia at some point in late 2019 or early 2020 when the case was filed against him.

"This is not enough, we need to go beyond and prosecute other warlords and their financiers and bring closure to wartime atrocities," he said.

As President George Weah's administration reneged to prosecute perpetrators, the massacre survivors are now working with campaigners to ensure Thomas is expatriated to the US.

"The conviction of Thomas is highly welcome and it is an eye-opener to victims of the decade long civil crisis who are still seeking justice," says Adama K. Dempster, Secretary General CSO Human Rights Advocacy Platform of Liberia and Founding Director, Independent human Rights Investigators.

"Victims can now take up the same approach (to file a civil suit) to get justice," he adds.

Thomas says the guilty verdict by the US Court came as a surprise to him.

"I went to the Church's guest house (ed: a five-minute trek from the church) and not the Church itself after the massacre and deployed some of my soldiers to mend the guest house," he said via telephone in Liberia.

He would not confirm nor deny reports that his men carried out the massacre. Thomas also failed to state clearly why he fled the US after the case was filed.

Despite his denial, human rights activist Dempster says Thomas' name is well known to many victims who narrowly survived the massacre.

"His name is on the lips of many victims, so we will advocate ensuring Thomas pay the price for his deeds," he asserted.

For now, Liberia is yet to establish a specialized war crimes court to prosecute those responsible for war-time violations, despite a recommendation from the country's Truth and Reconciliation Commission and the United Nations, as well as pressure from Liberian civil society and a few lawmakers.