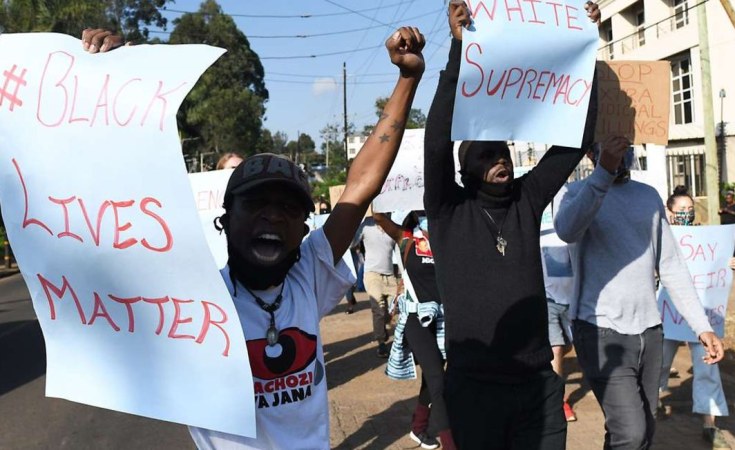 Simon Maina/Daily Nation
Protesters march during a demonstration in solidarity with the global Black Lives Matter protests over police brutality and white supremacy in the US, outside the US Embassy in Nairobi on June 2, 2020.
UN News Service

Two decades after a landmark declaration was adopted to eradicate racism, discrimination continues to "permeate institutions, social structures and everyday life in every society", the UN chief told a high-level meeting on Wednesday.

Marking the 20th anniversary of the Durban Declaration and Programme of Action (DDPA), Heads of States and Governments gathered in the General Assembly hall as part of UNGA76, to discuss reparations, racial justice and equality for people of African descent.

From glaring infringements to creeping transgressions, human rights are under assault, said the UN chief.

Some of the worst impacts in the "overlaps and intersections of discrimination" are suffered by women. And the world is witnessing "a troubling rise" in antisemitism, growing anti-Muslim bigotry and the mistreatment of minority Christians, he pointed out.

The Secretary-General urged everyone to condemn discrimination, hateful speech, and baseless assertions, as those pushing that ideology today, denigrate "our essential fight against racism".

Mr. Guterres highlighted a "transformative agenda" launched by the Office of the High Commissioner for Human Rights (OHCHR) to try and dismantle systemic racism, ensure accountability and deliver reparatory justice.

"This new awakening, often led by women and young people, has created momentum we must seize upon", he said, also recognizing the "meaningful progress" made by the Permanent Forum of People of African Descent in confronting systemic racism.

The UN chief called on Member States to "take concrete actions" to support these efforts on national and global levels to and to "recognize the contemporary resonance of past crimes that continue to haunt our present", such as transgenerational suffering and structural inequalities "deeply rooted in centuries of enslavement and colonial exploitation".

"We must reverse the consequences of generations of exclusion and discrimination - including their obvious social and economic dimensions through reparatory justice frameworks".

The UN chief urged everyone to "recognize diversity as richness" and understand that fighting racism is a universal and "concrete struggle in every society".

"No country can claim to be free from it", he said, underscoring the need to redress political, economic and structural imbalances; ensure that everyone feels respected as a valued member of society; and "stand together as one human family, rich in diversity, equal in dignity and rights, united in solidarity".

At a time when the world feels more divided than ever, the Secretary-General encouraged everyone to "unite around our common humanity... and re-commit ourselves to this essential purpose".

General Assembly President, Abdulla Shahid, upheld that the world has not done enough to "tackle the pervasiveness" of racial discrimination, intolerance and xenophobia.

"Racism begets violence, displacement, and inequity. It lives on because we allow it to. It penetrates society because we fail to acknowledge diversity", he said.

The COVID-19 pandemic further exemplifies how far the world is from righting past wrongs.

While acknowledging that pre-existing structural weaknesses were "a recipe for disaster" long before the coronavirus, he observed that throughout the pandemic, we see the marginalized and vulnerable "fall further behind", with many "denied equal access to health, education, and security".

'Turn the tide' on intolerance

During this "turning point" in time, Mr. Shahid urged world leaders to "turn the tide on racism and intolerance" by recognizing these failings and seeking racial equality to "close that divide" and build resilience for those left behind.

He underscored the importance of acknowledging the past, saying, we "cannot move past what is not addressed".

"I encourage the international community, individuals, leaders, and stakeholders, to engage in deeper and honest dialogue to address this global issue", he said.

High Commissioner for Human Right Michele Bachelet said it was vital to address the lasting consequences of racism, as millions continue to bear its burden, past and present; the legacy of colonial exploitation; and the inhuman and criminal enslavement of Africans.

Reparations must go "beyond symbolism" to include measures of restitution, rehabilitation and guarantees that it will never happen again, she said.

And they will require "political, human and financial capital", which, the UN rights chief added, "should be seen alongside the enrichment of many economies through enslavement and exploitation".

Using the example of a poor migrant woman of African descent, Ms. Bachelet highlighted the "multiple and intersectional manifestations" of racial discrimination.

She underscored that tackling this plague requires a comprehensive approach with "concrete strategies and actionable, time-bound targets" that are integrated into laws and policies.

While OHCHR will continue to support actions, she stressed that the anti-discrimination agenda belongs to everyone, irrespective of race, colour, national origin or religious affiliation.

"Racial justice can be achieved, for people of African descent and all others suffering racial discrimination", assured the human right chief.

South African President Cyril Ramaphosa delivered a pre-recorded video statement affirming that the Declaration and resulting action, embodies the commitments of the international community to address both the legacy of the past and contemporary forms of racism, and acknowledge that slavery and the slave trade are crimes against humanity.

At the meeting, Member States also adopted a resolution to mobilize political will at national, regional and international levels to fully implement the milestone Declaration.