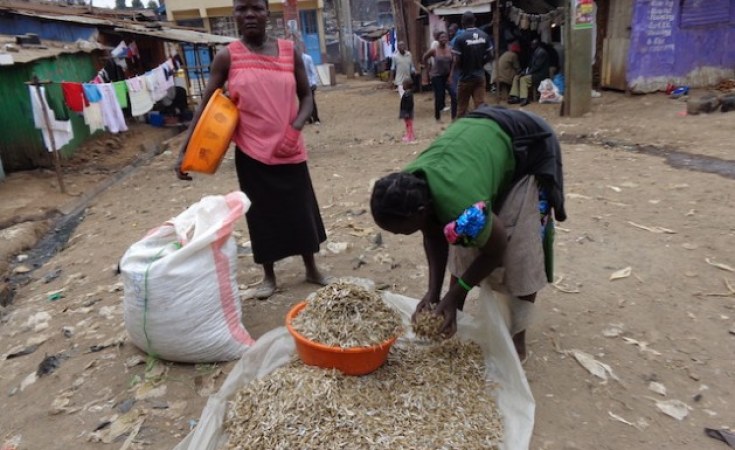 Miriam Gathigah/IPS
Residents of Nairobi's Mathare slum, one of the largest in Kenya (file photo).
The Nation (Nairobi)
By Brian Ambani

Poor households are feeling the pinch of the rising cost of living much more than their better-off counterparts, an analysis of official data shows.

Latest data from the Kenya National Bureau of Statistics (KNBS) seems to dispel the notion that inflation cuts equally across all households.

The Consumer Price Index (CPI), which measures the change in prices of goods, shows significant differences in spending patterns of poor households as compared to rich households.

The differences show the poor shoulder a heavier inflation burden than the wealthy.

To solve the puzzle, you need to first identify who spends how much and on what.

Basic commodities, which are mainly consumed by the poor, form the bulk of products sold, making them the prime target of the government's Sh1.7 trillion tax plan for this year.

But these basic goods take up the largest proportion of the monthly household budgets for the poor.

This means price increases as a result of the new taxes and other passed-on costs hits them much harder as compared to the wealthy, who direct much of their monthly spend elsewhere.

For instance, while the poor spend 36.3 per cent of their income on food alone, the rich on the other hand spend only 16.8 per cent on the same.

However, the price of food has risen 10.67 per cent between August last year and last month, which means that the increase in the prices of bread, milk, eggs, onions and potatoes in recent months digs a larger hole in the pockets of the poor as compared to high-income earners.

At the same time, the Kenya Revenue Authority (KRA) will next week begin collecting more excise duty from manufacturers and importers of beer, cigarettes and fuel, among other products, and the cost will be added on to the final price of these commodities at the shop for consumers to bear.

Yet, to get a picture of how this will affect income groups, note that the poor direct 2.3 per cent of their spending to alcohol, tobacco and narcotics, as compared to the rich who spend just 1.8 per cent on the same.

Meanwhile, rent and the prices of water, electricity, cooking gas and fuel have also increased 5.07 per cent in that time, in a further raid on the pockets of the poor, who spend 16.9 per cent of their income on the four, as compared to the high-income earners, who spend 13 per cent on them.

Additionally, the wealthy have a wide array of goods and services to choose from, which enables them to easily settle for products with lower prices.

For instance, if the price of maize flour rises, the rich might opt for pizza, which they will probably buy at the usual price, thereby sidestepping the higher cost.

But the poor have fewer options to choose from, which means they still have to buy these essential products but more expensively.

Conversely, the prices of the goods and services on which the rich spend most of their money have not risen as fast in the same time period.

For example, the cost of health, where the wealthy spend more (8.2 per cent) of their income than the poor (1.9 per cent) has risen only 3.28 per cent between August last year and last month.

The rich also spend more on furnishings and routine household maintenance (5.1 per cent) and restaurants and accommodation (14.4 per cent) which have risen by only 4.82 per cent and 2.95 per cent respectively in the same period.

The rising cost of goods has also led to a meteoric rise in counterfeit goods, which has watered down the quality of products being consumed by the poor as they cannot afford quality alternatives, says Consumer Federation of Kenya (Cofek) Secretary-General Stephen Mutoro.

Mr Mutoro says there has been a huge increase in low-quality and counterfeit packed foods, pharmaceuticals, both alcoholic and non-alcoholic beverages and electronics, which are not only short-changing consumers but also put their health at risk.

"If you increase taxes and running costs of businesses, they will increase the prices of their products. This moves these products out of the reach of consumers, which inevitably makes them resort to buying cheaper lower-quality goods and counterfeits," Mr Mutoro said.

Advising consumers to forego non-essential needs, change spending patterns and cut down on excesses to survive inflation, the lobbyist said the government must live within its means to reduce additional tax pressure on taxpayers.

"What you have is that each year the government presents very flowery revenue targets, which enables it to raise expenditure figures. But if you have a budget of Sh3.5 trillion but can only raise a third of it through revenue collection, you have to start to live within your means," he said.

Inflation hit an 18-month high of 6.57 per cent last month, the highest level since swinging to 7.17 in February last year.