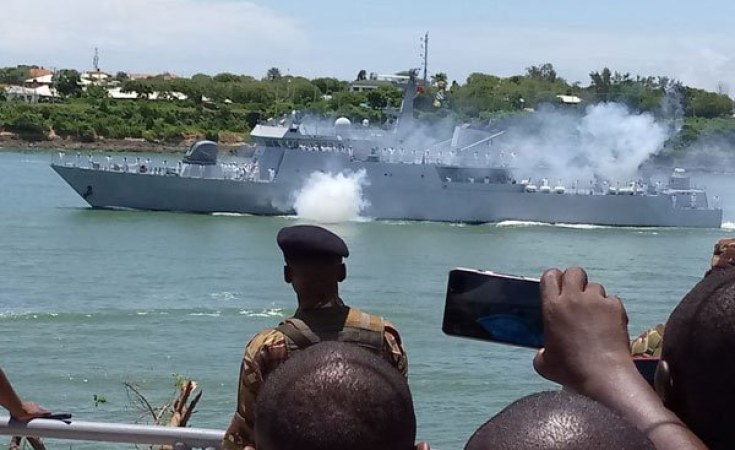 Anthony Kitimo/Nation Media Group
The Kenya Navy fires a 21-gun salute at the Indian Ocean during the 10th Mashujaa Day celebrations in Mombasa County on October 20, 2019.
The Nation (Nairobi)
By George Munene

The government has banned Mashujaa Day celebrations in all counties due to the Covid-19 pandemic.

Interior Principal Secretary, Dr Karanja Kibicho, said Friday that the public should watch the national celebration in Kirinyaga County on live television. The event will take place at Wang'uru Stadium in Mwea Constituency.

"The celebrations will not be held in other counties because cases of the disease are still being reported," Dr Kibicho said, stressing that the government wants to protect Kenyans. He asked county commissioners to ensure the ban is enforced.

Speaking while inspecting Wang'uru Stadium, which is under construction, Dr Kibicho said the government is taking the disease seriously and wants all containment measures observed.

The Sh300 million stadium with a capacity for 10,000 people is expected to be completed on October 5.

Only 2,000 people will be allowed into the venue in order to ensure social distancing to help curb the spread of the virus..

"Many residents wanted to attend the celebrations which will be presided over by President Uhuru Kenyatta but it will not be possible due to the disease which is ravaging the lives of the people," the PS said.

Dr Kibicho reiterated that major development projects are taking place in the region and must be completed before the celebrations.

"Roads are being built and street lights installed in major towns in the region. A State lodge, where the Head of State will have lunch with his guests, is under construction, while Wang'uru airstrip is being upgraded. These are some of the projects that must be done perfectly," he said.