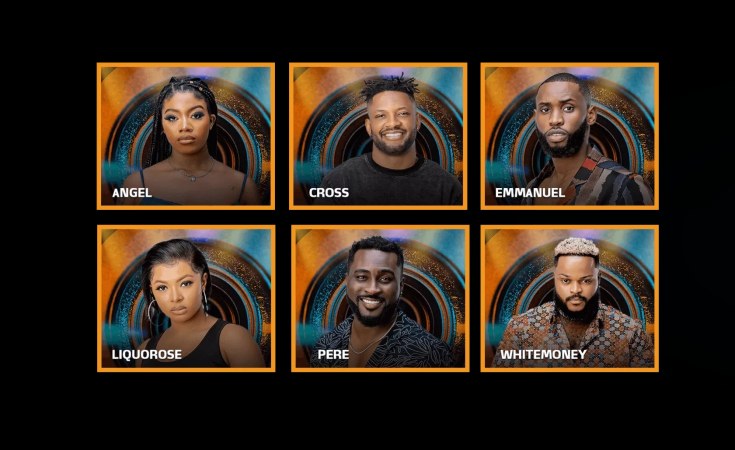 Africa Magic
There are now six finalists in the game. They are, Angel, Cross, Emmanuel, Pere, Liquorose, and White Money.
Daily Trust (Abuja)
By Christine

Pere and Angel have made it to the finals of the Big Brother Naija season 6.

During the Sunday live eviction, the duo were among five housemates that were evicted.

But Ebuka Obi-Uchendu, host of the show, later clarified that they were evicted from the house, not the show.

They were secretly kept in a room where they played a game to determine the fifth finalist of the game.

Biggie had instructed them that whoever won the game would return to the house and will be one of the top five while the other housemate would go home.

But on Monday evening, Biggie applauded them for their tenacity and granted both of them the opportunity to return to the game.

There are now six finalists in the game. They are, Angel, Cross, Emmanuel, Pere, Liquorose, and White Money.

Meanwhile, Emmanuel has emerged the final Head of House of the show.

He emerged the winner after scoring 34 points at the HOH game.

The new Head of House elected Liquorose as his deputy.

Previous Story
Pere, Angel Back in Big Brother's House for Finals
Next Story
Queen, Saga and Nini Say Their Goodbyes in BBNaija

Pere, Angel Back in Big Brother's House for Finals

Queen, Saga and Nini Say Their Goodbyes in BBNaija