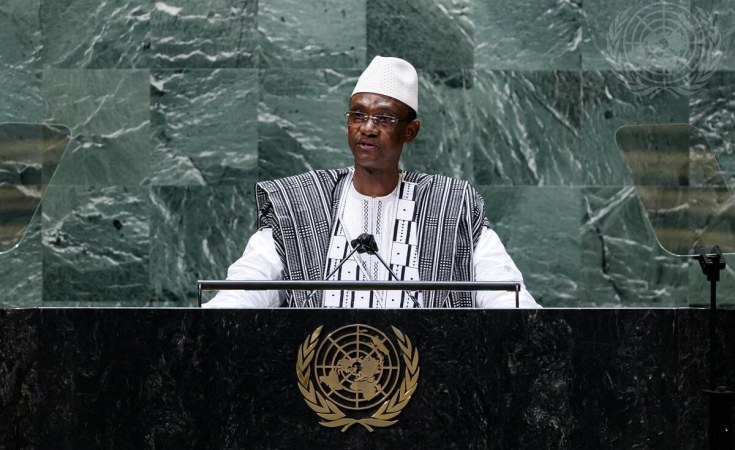 Mali's Prime Minister Choguel Maiga has defended comments he made before the UN General Assembly on Saturday that France had abandoned his country in mid-flight with the "unilateral" decision to reduce the number of French troops in the country.

Speaking to RFI and France 24, he also said Mali could push back presidential and legislative elections from late February.

Maiga is handling the transition back to democracy following the August 2020 overthrow of President Ibrahim Boubacar Keita.

Under pressure from the Economic Community of West African States (ECOWAS), Mali's new military leaders agreed to an 18-month transition that would culminate with presidential and legislative elections on 27 February, 2022.

Maiga said that date could be postponed by "two weeks, two months, a few months".

"The calendar was based on the requirements of ECOWAS without asking what practical steps must be taken to get there," Maiga told RFI on Sunday.

"The main thing for us is not so much to stick to 27 February but to hold elections that will not be contested."

Maiga said a final date would be determined by late October.

Ecowas suspends Mali after second coup, but no new sanctions

ECOWAS has not yet responded. Last month the bloc said it would impose sanctions, including freezing assets, on anyone holding up preparations for Mali's elections.

On Saturday, Maiga ripped into France during his address to the General Assembly, accusing Paris of abandoning it by preparing to withdraw its Barkhane force - halving its troops in the Sahel by 2023.

"When I say we were 'abandoned in mid-flight' it's because we found out about this [downsizing] through the media, whereas we had a defence agreement," Maiga said.

He criticised the lack of consulation with France, and said that eight years after France sent in troops, two thirds of the country is now plagued by terrorism.

"We have to question the pertinence of the medicine Mali has been prescribed for its illness," he said. "The Mali government is forced to look for other solutions to secure its people and goods."

Maiga specifically addressed reports that Mali is close to sealing a deal with a Russian company, the Wagner Group, to hire mercenaries to help fight Islamist insurgents.

Fighters working for Wagner have been accused of abuse in Syria, Libya and Central African Republic.

"All this debate around Wagner is rumours for now", Maiga said, adding that he did not personally know the group.

"As soon as the Malian government signs a deal, and it could be shortly, we will make it public," he said.

France has warned Mali that hiring the fighters from the Russian security firm would isolate the country internationally, and be incompatible with continued French presence there.

Mali to open War College to train its own army officers, with French help