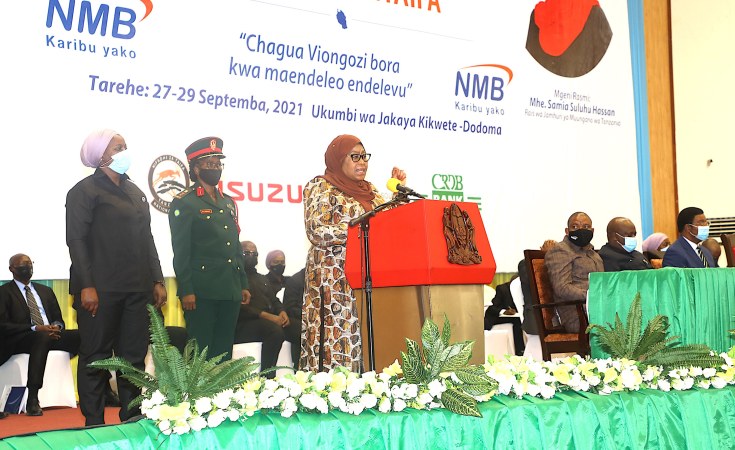 President Samia Suluhu Hassan has pledged to build 15,000 classrooms countrywide in efforts to ensure that more children are going to school.

President Samia made the promise at a special general meeting for the Association of Local Authorities of Tanzania (ALAT) held in Dodoma yesterday, insisting that the improvement of education and health sectors was a key priority for her government.

"We want to make sure that come January next year, all children are admitted to school and in ensuring that we have enough classes, therefore, to cover the shortage we will construct 15,000 classes," she said.

The president said there was a deficit of 11,000 classrooms countrywide but her government was determined to surpass the demand.

The Head of State used the similar occasion to direct all District Executive Officers (DEDs) to channel their revenue collections in development projects, adding that those who would fail to implement the directive would not be tolerated in her government.

Regarding the Covid-19 pandemic, the president asked health officials to intensify the public awareness campaign, so that all Tanzanians received the vaccine in efforts to reduce the disease in the country.

At the meeting, the Head of State asked ALAT members to share experience in policies, regulations and laws, so that they can offer advice to local government authorities.

She further asked them to equally offer their advice on the interest of the country in the Commonwealth countries because ALAT was also a member representing the country.

On budgetary allocations, President Samia said the Ministry of State in the President's Office Regional Administration and Local Government was an engine of the country's development that is why 20 per cent of the budget in this financial year (7.3tril/-) was allocated to the ministry.

"We will continue allocating funds to this ministry depending on the available budget," she insisted.

ALAT yesterday conducted its election to elect new leaders of the association, as President Samia requested the new leaders to ensure that Tanzania attained all 17 Sustainable Development Goals (SDGs), especially elimination of hunger and poverty.

"In my recent working tour of Kigoma, Kagera, Geita and Kilimanjaro regions, I was satisfied that development projects by local government authorities were being implemented well," said Mr Majaliwa.

He was supported by the Speaker of the Parliament, Mr Job Ndugai, who commended ALAT for what they have been doing in the implementation of development projects.

Earlier on, the Minister of State in the President's Office, Regional Administration and Local Government, Ummy Mwalimu thanked the president for timely disbursing funds for development projects insisting that so far 75bn/- had been disbursed for construction of 50 health centres.

She further added that another 7bn/- had already been disbursed for construction of classes in secondary schools.

Ms Mwalimu revealed that during the past two months, the government had provided about 62.4bn/- in all 184 district councils for free basic education.