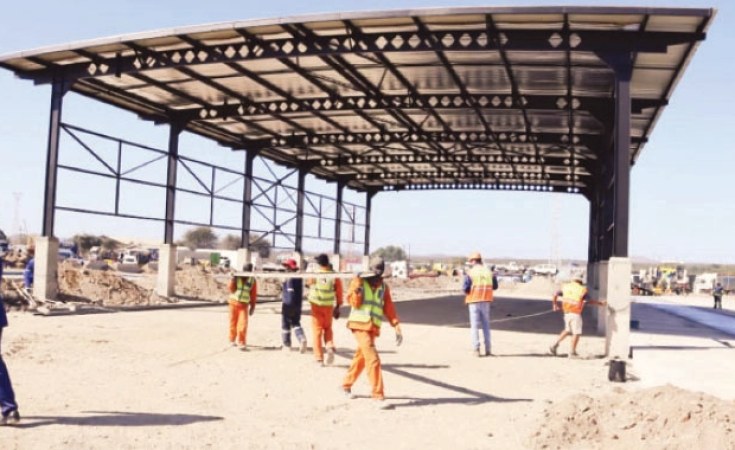 Thupeyo Muleya / The Herald
...
The Herald (Harare)
By Bulawayo Bureau

The new-look Beitbridge Border Post that is shaping up following the completion of the first phase under its ongoing US$300 million modernisation programme has ignited excitement among the border town's residents.

President Mnangagwa is expected to tour the project soon.

Modernisation of the Beitbridge Border Post is in line with Vision 2030 of attaining an upper middle-income economy, and is one of the key projects being undertaken by the Second Republic to promote the ease of doing business and trade facilitation.

Civil works are being rolled out in three phases with new terminals being built for each vehicle category.

They will include new vehicle parking areas and feeder roadways.

The second and third phases will involve construction of new terminals for buses, light vehicles and pedestrians.

There will also be construction of water and sewer reticulation infrastructure and 220 houses for border staff.

It is being upgraded through a 17-year Built Operate and Transfer (BOT) arrangement between the Government and ZimBorders Consortium.

Under the initiative, the Government is providing technical support while ZimBorders, through various financial institutions is funding civil works.

"This project couldn't have come at a better time than now. We really appreciate the efforts being made by Government, particularly when it comes to the issue of ease of doing business and facilitating trade," Mr Makhado said.

Mr Ulungile Mudau, a local businessman said: "Beitbridge being a border town is actually the face of the country and we are glad modernisation of the border post will change the perception that travellers had about our country."

Ms Nnditsheni Ndou of Dulivhadzimu said modernisation of the border was long overdue.

"For many years, our border post has been a laughing stock because of the poor infrastructure. When the project started, I never expected it would become such an impressive world class commercial hub," she said.

Mr Joram Sithole, a local taxi driver said: "Modernisation of the Beitbridge Border Post is clearly an indication that the Government under President Mnangagwa is action-oriented. Things are now moving and this massive project is testimony to that."

Permanent Secretary in the Ministry of Transport and Infrastructure Development Engineer Theodius Chinyanga told our Bulawayo Bureau yesterday that although the newly-upgraded commercial terminal will officially "go-live" on October 6, the facility has already been opened to commercial traffic.

Eng Chinyanga said Government is impressed with the rate at which work is progressing.

"The first phase of the project is complete where we now have a maintenance building, which will basically house all systems at the border.

"There is also a new weighbridge and refurbished scanners and a warehouse, roads and parking," he said.