Rwanda - Bagosora, A Major Player in a Genocide Without Mastermind 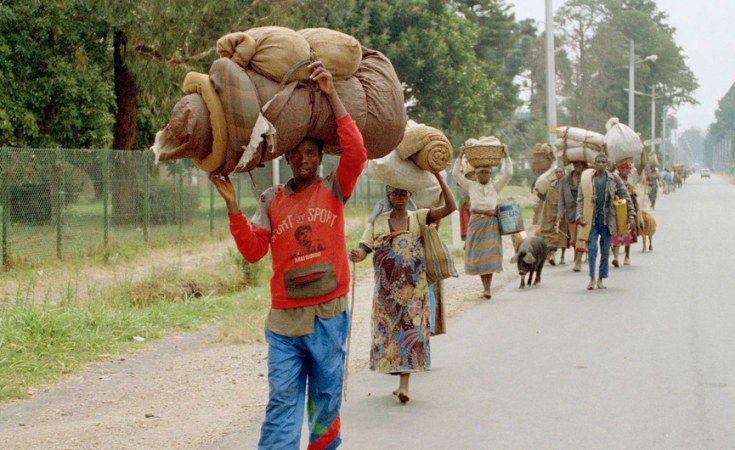 John Isaac/UN Photo
Rwandan refugees who fled the country during the genocide are pictured returning home in 2005.
JusticeInfo.net (Lausanne)
opinion By André Guichaoua

The death, on 25 September, of the man who was presented as the brains behind the 1994 genocide of the Tutsis in Rwanda, attracted little media attention. Sociologist and Rwanda specialist André Guichaoua looks back at the journey of Colonel Théoneste Bagosora and those three fateful days in April 1994 when he went down in history as a chief orchestrator of the greatest crime of the late 20th century.

In October 1990, when the Rwandan Patriotic Army (RPA), which was formed from Ugandan army units made up of Tutsi refugees who had fled Rwanda in the late 1950s and early 1960s, launched its first attack on Rwanda, the military regime that had been in power in Kigali since 1973 was worn out and faced a serious economic crisis and strong democratic demands. The personal power of General Major Juvénal Habyarimana at the head of this party-state was strongly criticized. The Rwandan army was weakened and divided. Officers from the southern prefectures were marginalised; young officers who had graduated from abroad denounced the clientelist, ethnic and regional logic that governed the military institution and divided it; and senior officers from the north contested the monopoly of power and the control of national resources that Habyarimana and his relatives exercised. Several of them had joined the RPA rebellion.

Faced with the war in a weak position, threatened by the introduction of a multi-party system, the northern officers from the presidential area - of which Colonel Théoneste Bagosora was a major representative - tried to remobilise the armed forces by exploiting the same ethnicist slogans as in the 1960s.

A retired officer in ambush

After the installation of a multi-party government in April 1992, the new Minister of Defence, James Gasana, loosened the ties of this army, which had been tied up by the presidential networks, and set about rebuilding a 'national' army and remotivating its soldiers. Supported by a reformist government, he profoundly restructured the military command, reorganised the intelligence services and redeployed resources and equipment between the units.

With democratisation, Habyarimana could no longer hold the presidency and the position of head of the army at the same time. In May, he announced that he wanted to appoint Bagosora as head of the army. The Minister of Defence and the Prime Minister opposed this. After a long struggle, the Defence Minister retired Bagosora as well as the other presidential candidates. With the appointment of two new chiefs of staff of the army and the gendarmerie, practically all the prominent figures or close collaborators of the president were sidelined.

Appointed Director of Cabinet of the Minister of Defence under the direct orders of the Minister, Bagosora nevertheless occupied a strategic position of observation and monitoring. It was not long before his powers were extended: in July 1993, the Minister of Defence, faced with serious threats from extremist elements of the presidential camp, was forced to flee the country, as was the Prime Minister several weeks later. He was replaced by Augustin Bizimana, a civilian who was sympathetic to the extremists' cause and ignorant of military matters. The restoration was carried out with great speed and, now out of uniform, Bagosora became a privileged support point for the 'hardliners' of the regime within the Ministry of Defence, without being able to upset the new balance of power that prevailed within the armed forces.

The failure to seize power

On the evening of 6 April 1994, after the attack on the presidential plane that killed Habyarimana, members and relatives of the president's family got together and, at their request, Bagosora found himself in the role of an orchestrator of security logistics and the mobilisation of loyal units. It was not only a question of eliminating the opponents, but also of placing the dignitaries of the regime, the ministers and their families under the protection of the Presidential Guard and then the French Embassy.

Allowing Théoneste Bagosora to be installed at the head of a military committee appeared, at first, to the now restricted nucleus of the regime's radicals to be the most effective and secure solution. However, Bagosora did not manage to impose himself.

As the Chief of Staff had also died in the attack, various officers who had rushed to the Ministry of Defence organised an impromptu meeting. There were two opposing positions. The first, which had a large majority, saw the 'committee' as a provisional structure responsible for securing the institutions while an interim leadership, under the authority of Agathe Uwilingiyimana, the Prime Minister, would rapidly put in place the transitional institutions. The second, supported by Bagosora and some other officers and then endorsed by the leaders of the presidential party MRND, consisted of handing over power to this 'crisis committee', which would replace the multi-party government in place and negotiate a succession in line with the interests of the politicians and military hierarchs of the North.

The rise of the extremists

Bagosora was eventually forced to give up the idea of setting up a military crisis committee under his command. But around him, the minority officers organised the settling of scores and revenge that they had been dreaming of for months. Thus, on Thursday 7 April, while the military high command ordered the reconnaissance battalions and the military police to deploy to stop the massacres of the population that had already begun, units of these same battalions joined in the killings organised by the Presidential Guard, with the approval of its commander, Major Protais Mpiranya.

Bagosora continued to give orders throughout the day in order to create the conditions for chaos in which radical extremist elements could rush in. For example, he only signed the communiqué of the Crisis Committee in the early afternoon, while the assassinations of members of the government and internal opposition figures became widespread. At the same time, he organised with the leaders of the MRND the setting up of an interim government composed exclusively of representatives of the pro-Hutu factions of the opposition parties.

Even though a majority of the members of the Crisis Committee were unable to move around in town to assess the situation for themselves and no information or explanation was ever provided by the real 'decision-makers' of the events that were taking place and turning the political framework upside down, they were invited on the evening of 7 April to the introduction of the new president and, at the end of the afternoon of 8 April, to 'receive' the new interim civilian authorities. The mission of the Crisis Committee was terminated, but the unity of the military command had definitely been broken. There followed a disorganised mobilisation of available resources, the aim of which was more to strengthen this or that regional faction within a heterogeneous alliance than to achieve political and/or military victory over the opposing camp. On 21 May, Bagosora was finally reintegrated into the army.

A genocide without mastermind

In 2012, at the end of a long process that began with Bagosora's arrest in Cameroon in 1996, the Appeals Chamber of the International Criminal Tribunal for Rwanda, set up by the UN in the aftermath of the genocide, handed down its final judgment. Focusing on those three decisive days in April 1994, the judges confirmed Bagosora's responsibility for genocide, crimes against humanity and war crimes, for not having prevented the crimes or punished them. The chamber did not find that there was a criminal conspiracy, vexing the prosecutor's claim that the genocide was planned. A major activist in the genocide, Bagosora embodied the ethnist drift of a desperate regime and its instrumentalisation of the massacres, but he was not the "mastermind".

This formula is indeed inadequate. Firstly, because, apart from his hierarchical position, his rank and his Shiru origin (like Habyarimana), which propelled him to the forefront, his involvement was not fundamentally different from that of a number of other influential officers who were conducting what they knew to be their last battle in their areas of responsibility and with the resources they had at their disposal. Secondly, because these officers whom President Habyarimana appreciated and consulted for their strategic skills were no longer able to do so. Faced with the immediate demands of survival, they reacted and fought the war like 'wounded buffaloes', as the expression in Kinyarwanda goes. Finally, they knew that this genocidal policy was their responsibility and, for once, they subcontracted it as much as possible to personalities from the south or to ambitious and upstart people.

André Guichaoua is professor of sociology at the University of Paris 1-Panthéon Sorbonne. He was an expert witness at the International Criminal Tribunal for Rwanda and has testified in numerous trials before this UN court as well as before national courts. He is the author of many books, including "From war to genocide. Criminal politics in Rwanda (1990-1994)" (UW Press, 2017).

Activists Protest Against Burial in France of Genocide Architect Bagosora

Next Story
Tagged:
Copyright © 2021 JusticeInfo.net. All rights reserved. Distributed by AllAfrica Global Media (allAfrica.com). To contact the copyright holder directly for corrections — or for permission to republish or make other authorized use of this material, click here.