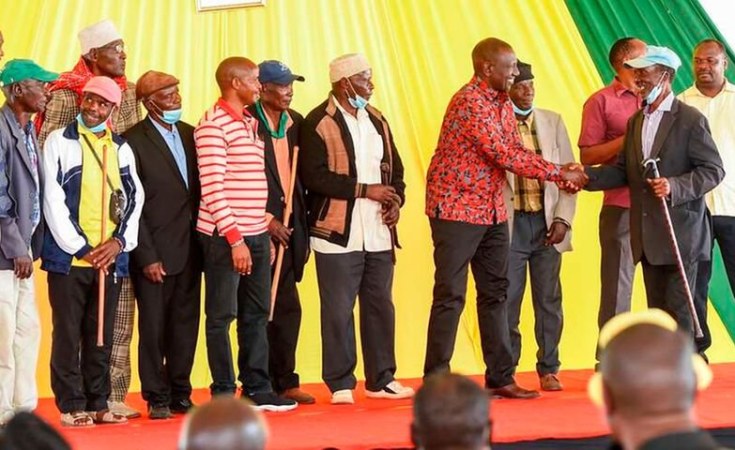 Nairobi — Deputy President William Ruto has said the 2022 election contest has been framed and he is ready for it.

While referencing the recent endorsement of his chief opponent Raila Odinga by a group of influential businessmen from the Mt Kenya region, the Deputy President said the political party he leads will forge an alliance with the people and dismissed the ODM leader's formation as one seeking to secure selfish interests.

He said the race is going to be between the coalition of a few political leaders on one side and the alliance of the people on the other.

"It will be between those who prioritize positions for leaders against those of us who are keen on jobs creation for the millions of ordinary Kenyans," he said.

He added that the poll will put in competition those for the review of the Constitution with those who back the changing of the economy to uplift the poor.

Dr Ruto said it is Kenyans who will make the ultimate decision between the group that is after power sharing and that for the empowerment of the people.

He was speaking on Friday at his Karen Residence during a consultative meeting with more than 350 United Democratic Alliance (UDA) aspirants from Nyeri, Laikipia, Meru and Tharaka-Nithi Counties.

The Deputy President assured the aspirants of the party's commitment to holding fair nominations.

"Fairness is the irreducible minimum that UDA aspirants must expect from the party. It will not be done until it is fair," he explained.

"There will be no preferred candidates in UDA. It is fairness that makes or breaks a political party," he added.

Even though many leaders and politicians had "contributed immensely" in the building of the Hustler Nation, Dr Ruto insisted that they, too, must be ready to participate in tight UDA nominations. He noted that the party was looking for a win-win situation in the nominations, where those who win get the ticket and losers expected to back them.

Dr Ruto said the proposed degree qualification for leaders should not be used to bar anyone who wants to run for an electoral office.

He argued that he was committed to transforming UDA into a national outfit that brings people together and is able to run a national agenda in government.

"UDA's plan is different from its competitors. The focus is on uniting Kenyans, expand enterprise, create jobs, generate wealth and tackle poverty from the bottom of the economic pyramid," he told the meeting.

He explained that while the wealthy were meeting at top notch hotels to protect their interests, ordinary Kenyans must also be offered an opportunity to plan their future.

"It should not be labelled as a class war by those who fear the uplifting of the poor."

Gachagua asked the wealthy to stop imagining that they own the poor.

"Let them (the rich) go ahead and support Raila Odinga; we will continue to back the Deputy President," said the Mathira MP.

Previous Story
Ruto Urges Youths to Be Listed as Voters to Participate in Decision-Making
Next Story
Ruto Vows to Focus On Hustlers, Says Competitors Free to Meet Power Brokers