Africa: Statement by African Ministers of Finance and Economy on the IMF 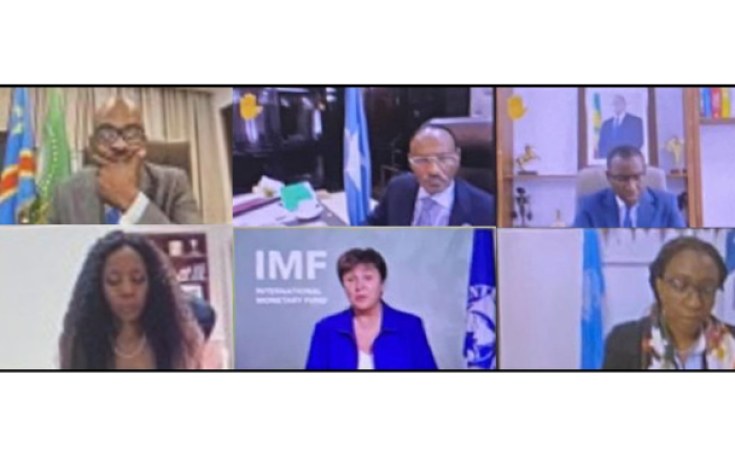 UNECA
Meeting on September 30, 2021 of African Ministers of Finance and representatives from the United Nations Economic Commission for Africa (UNECA) with IMF Managing Director Kristalina Georgieva to discuss Africa’s response to the COVID-1.
allAfrica.com
guest column

As finance and economy ministers of Africa, multilateralism for us is more than just an abstract foreign policy issue. It is about achieving prosperity for millions of our citizens.

Our countries have been and are currently facing formidable economic, social, and political pressures - many of which are the result of external shocks. That is why, while adopting national mitigation measures, we also rely on multilateral institutions to propose collective life and livelihoods economic relief.

Today, multilateralism is in question at a time when it is most needed. While the advanced economies were able to rapidly put in place monetary and fiscal buffers to respond to the Covid-19 crisis, commanding over 26 percent of their GDP to fight an impending recession, African countries have been able to mobilize less than one percent of GDP to respond to the crisis. The pandemic has been a test of the multilateral system, its speed of reaction and its understanding of diverse country challenges. Never before in modern times has the world been faced with such a collective shock to its economies and health.

The International Monetary Fund has been a steady partner, disbursing unprecedented resources including debt forgiveness for the poorest countries using the Rapid Credit Facility. During 2020, the IMF rapidly activated all facilities in support and provided over $30 billion to African economies.

Leadership has been an important element in the response to the crisis. Managing Director Kristalina Georgieva has demonstrated steady leadership during this time of crisis. At a time when multilateralism gave way to vaccine and economic nationalism, the IMF under her leadership, was able to provide global solutions for a global common.

Many of us have known, interacted, and collaborated with Ms Georgieva for many years. In our frequent meetings, we found her to be a true partner. In our dealings, she has demonstrated integrity, energy and progressive advice. As we mark her second anniversary as IMF MD, we can confidently say she has brought a human touch to development and to the organization she leads.

She played a critical role in the unprecedented general allocation of Special Drawing Rights (SDRs) equivalent to US$650 billion providing liquidity and reserve buffers to many countries in need. She has fought to advance multilateralism and has been a vocal advocate for developing nations. She has been an invaluable partner who has contributed to our collective successes.

Today, as we advocate for on-lending of 20-35 percent of SDRs to support the following; a vaccines facility, a Poverty Reduction and Growth Trust, a Resilience and Sustainability Trust, a Liquidity and Sustainability Facility to support Middle income countries in need of better market access, and on-lending to regional development and multilateral banks to respond better to the recovery, the IMF has been a steady partner. She is working with us to explore ways of extending debt maturity and dealing with the climate crisis.

Benchmarking policy actions across countries has undoubtably been an instrument of progress in the development community. While some of us may disagree with our individual rankings on the Doing Business index, we agree that the tool has allowed many of us to advance on our reform agenda and has helped us improve the business environment in particular for our national and regional private sector. Indeed, improvements in the doing business and the associated policy reforms have helped us and our private sector respond better to this crisis.

The index of course like many indices is not without shortcomings and we appreciate that every year the Bank and countries have worked to improve the methodology. The allegations surrounding the World Bank's 2018 Doing Business report are serious and should be investigated. However, we also believe this should be done in a manner that does not undermine the integrity of the IMF and most of all, must allow for a fair and just process.