Kenya: Drought to Get Worse As Reduced Rains Predicted 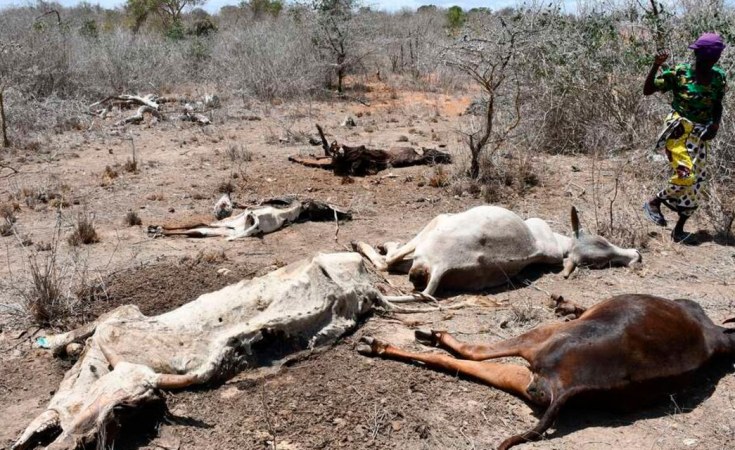 The drought that has left millions of Kenyans without food and water and killed hundreds of thousands of animals in the north and Coast region is bound to get worse, the Met department has warned.

According to the latest forecast, the dry spell is set to extend southwards as it ravages counties in Ukambani and other regions in Coast and the Rift Valley.

Several counties are battling starvation; with over 9,000 people in need of treatment for malnutrition in Marsabit and more than 200,000 others surviving on one meal a day in Kilifi.

But it appears there is no respite in sight, with the Kenya Meteorological Department, in its forecast for the October-November-December short rains season, saying things are bound to get worse.

According to the weatherman, most parts of the country will experience depressed short rains that will start late and cease early, with Eastern region being the worst hit.

Further, the rainfall is expected to be poorly distributed, both in time and space, during the onset month of October and the peak month of November.

"In the month of December, sunny and dry conditions will prevail over several places as the season draws to an end," the forecast reads in part.

Dividing the country into six zones, the met outlook is bleak for Arid and Semi-arid lands (ASAL) areas, with no definite onset and cessation of the short rains in Turkana, Marsabit, Mandera, Isiolo, Garissa, Wajir and Samburu falling in Zone D.

For Zone E-- Kitui, Makueni, Machakos Taita Taveta, Tana River and Kajiado -- the rains will be late beginning in the second or third week of November and ending a month later.

Lamu, Mombasa, Kwale and Kilifi in Zone F are also facing a drab outlook as the rains will only start in November and end as December sets in.

According to the forecast, residents of ASAL counties are staring at acute water shortages for general and domestic use as dams, water pans and lakes are likely to dry up.

Their animals are also on the verge of death as foliage and pasture continues to dry up in northeastern, northwestern and southeastern Kenya. The ripple effect will be escalation of human-wildlife and inter-community conflicts over the limited resources.

Further, cases of malnutrition and food shortage are also expected to spike-- resulting in diseases associated with lack of proper nutrition and poor hygiene. "The northern and eastern parts are likely to be susceptible to dust storms, which may lead to an increase in respiratory tract diseases," the Met forecast says.

According to the forecast, Mandera, Marsabit, Wajir, Garissa and Isiolo counties will experience mainly sunny and dry weather conditions.

Kitui, Makueni, Machakos Taita Taveta and Kajiado counties are also expected to only experience poorly distributed, occasional rainfall during the season, with the amount likely to be below the long-term average.

The same weather pattern will be experienced by the Coastal counties of Mombasa, Tana River, Kilifi, Lamu and Kwale. The weatherman said the current situation has been long time coming after depressed rainfall in the long rains season of March and May, where the onset delayed.

The rains were also near average to below average and poorly distributed over most parts of the country.