Rwanda: How ADF, Is Are Linked to Insurgents in Mozambique 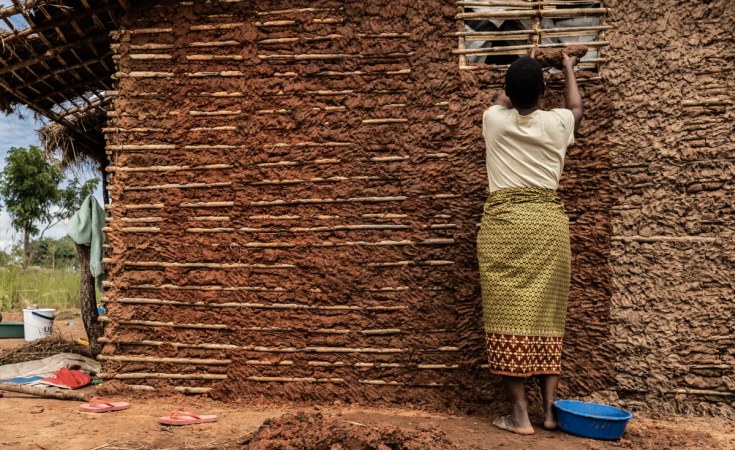 Tadeu Andre/MSF
At the Mapupulu site for internally displaced persons a woman is seen patting mud into the frame of the hut her family is building after having fled the armed conflict happening in Northern Mozambique, Cabo Delgado province (file photo).
The New Times (Kigali)
By James Karuhanga

In October 2017, armed extremists linked to the Islamic State of Iraq and the Levant (ISIL) launched an insurgency in Cabo Delgado, the northernmost province of Mozambique, purportedly in a bid to establish a caliphate.

In the past four years, the Islamic State-linked group Ansar al-Sunna, also known in Cabo Delgado as Al-Shabab - although they do not have known links with the Somali al-Shabaab - attacked villages, killed more than 2,500 people, displaced hundreds of thousands of others, and destroyed property and infrastructure, including schools and health centres, in the vast Province.

Rwanda, at the request of Mozambique, on July 9, started deploying 1,000 troops to Cabo Delgado to support efforts to restore Mozambican state authority by conducting combat and security operations, as well as stabilisation and security-sector reform.

At the time, RNP spokesperson, CP John Bosco Kabera said investigations indicate that the suspects work with the Allied Democratic Forces (ADF) terror group based in DR Congo's North Kivu. The suspects declared that they wanted to carry out terror attacks as revenge for Rwanda's intervention in Cabo Delgado.

"The ADF are a terrorist group based in eastern DRC and are part of ISCAP (Islamic State in Central Africa Province)," Kabera said on Tuesday, adding: "They are linked to the group in Cabo Delgado because they are all affiliated to ISCAP."

According to reports, IS-CAP, also known as Central Africa Wilayah and Wilayat Wasat Ifriqiya, is an administrative division of the Islamic State (IS), with presence in the Democratic Republic of the Congo and Mozambique.

The US government also designating respective leaders of the two organizations, Seka Musa Baluku and Abu Yasir Hassan, as SDGTs.

As a result of these designations, among other consequences, all property and interests in property of those designated that are subject to U.S. jurisdiction are blocked, and U.S. persons are generally prohibited from engaging in any transactions with them.

ISIS-DRC, also known as the Allied Democratic Forces (ADF) and Madina at Tauheed Wau Mujahedeen, among other names, is responsible for many attacks across North Kivu and Ituri Provinces in eastern DR Congo. Under the leadership of Seka Musa Baluku, ISIS-DRC is notorious in the region for its brutal violence against Congolese citizens and regional military forces, with attacks killing over 849 civilians in 2020 alone, according to UN reports.

The ADF was previously sanctioned by the U.S. Department of the Treasury and the UN in 2014 for its violence and atrocities.

The U.S. Department of the Treasury also sanctioned six ADF members, including leader Seka Musa Baluku, in 2019 under the Global Magnitsky sanctions program for their roles in serious human rights abuse, with subsequent UN sanctions listing for Baluku in early 2020.

The group in Mozambique reportedly pledged allegiance to ISIS as early as April 2018, and was acknowledged by ISIS-Core as an affiliate in August 2019.

Previous Story
Insurgency Spreads to Niassa
Next Story
How Big Is the Islamic Threat in Mozambique? and Why Are Rwandan Troops There?

How Big Is the Islamic Threat in Mozambique? and Why Are Rwandan Troops There?