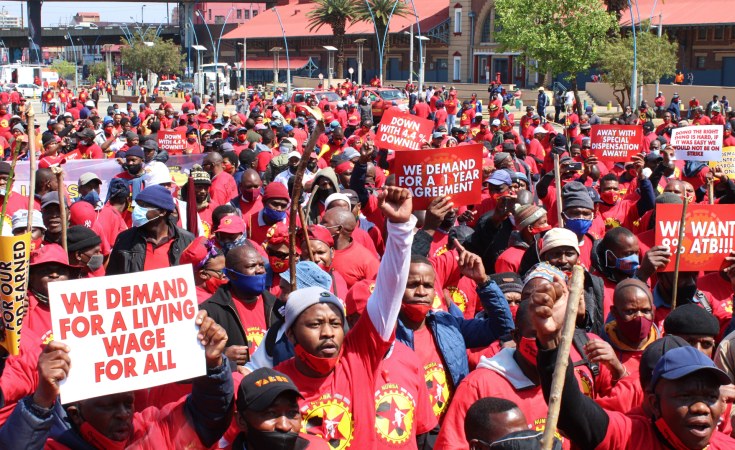 Masego Mafata/GroundUp
Hundreds of NUMSA workers marched from the Mary Fitzgerald Square to the Metals Engineering Industries Bargaining Council office in Marshalltown to hand over the memorandum of their demand on Tuesday. It was part of the national strike by steel engineering workers who are demanding an 8% wage increase, among other things.
Daily Maverick (Johannesburg)
analysis By Ray Mahlaka

Workers in the steel and engineering sectors have embarked on an indefinite strike over a long-standing dispute on salary increases in 2021. The strike might be like the one in 2014, which lasted four weeks and cost South Africa's economy R6-billion.

Shop floors at steel factories across SA were abandoned on Tuesday after workers downed tools and embarked on an indefinite strike across the country that is set to bring an important component of the economy to its knees.

Workers affiliated with the National Union of Metalworkers of SA (Numsa) in the steel and engineering industry went on strike over a long-standing dispute on salary increases in 2021.

The strike, which involved some of Numsa's 432,000 workers, is reminiscent of the one in 2014 that lasted for four weeks and cost the steel and engineering sector between R300-million and R500-million per day, or R6-billion for the broader economy.

News of the strike sent the share price of ArcelorMittal SA, one of the country's big steelmakers, nearly 1% lower on Tuesday, wiping off R68-million from its value on the JSE.

The steel and engineering industry is an important component of SA's economy: it represents nearly 2% of the country's economic output...