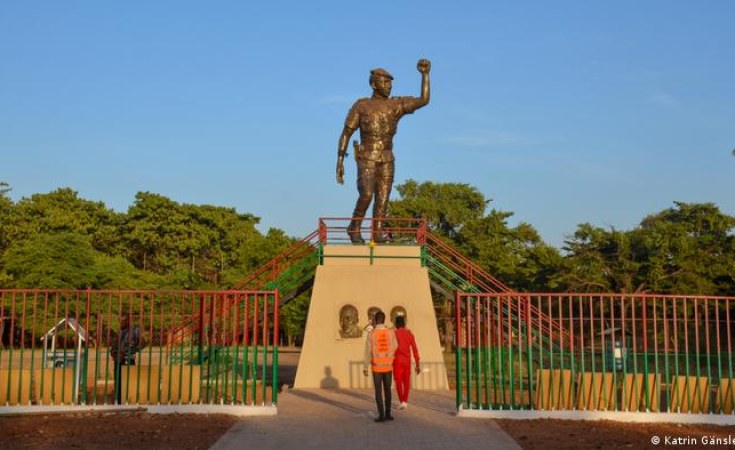 In Burkina Faso, a historic trial is taking shape for the death of iconic leader Thomas Sankara in 1987. But the main defendant and former president, Blaise Compaore, will be absent.

"Thomas Sankara is a fighter. Ever since my childhood, I liked what he did," said Sogbedji, who moved to Burkina Faso from neighboring Benin three years ago. Now he can visit the statue and memorial to his hero in peace.

"He fought so much for Burkina Faso," Sogbedji said. "It's amazing."

For days Sankara, who came to power in Burkina Faso -- then called Upper Volta -- after a coup on August 4, 1983, has been a hot topic in Ouagadougou again. On Monday, a historic trial will finally begin to shed light on how he and 12 other military officers were killed on October 15, 1987.

Jean-Hubert Bazie, a retired journalist, and the communications officer for the Thomas Sankara Memorial, is also eagerly awaiting the trial. "We hope the truth sees the light of day," he said.

The truth is tightly bound to the location of the statue, which, together with a tower, should become the centerpiece of a future park covering almost 10,000 square meters (107,000 square feet). Bazie walked along a path towards two houses. One served as the headquarters for the National Revolutionary Council (CNR), which catapulted Sankara to power.

"Look at the one on the left. Thomas Sankara and 12 comrades were executed there," Bazie said.

A large portrait and a wreath of plastic flowers commemorate the scene of the execution. On that Thursday, Sankara -- then 38 years old -- met here with members of his Cabinet to discuss the founding of a political party. Suddenly, gunshots rang out outside. As the men tried to escaped the building, they were gunned down. Only one, Alouna Traore, survived.

The main defendant in the trial is Blaise Compaore, Sankara's former companion and eventual president of Burkina Faso. Compaore, now 70, remained president until his resignation on October 31, 2014.

After leaving office, Compaore went into exile in the Ivory Coast, becoming an Ivorian citizen in 2016. Nobody expects him to attend the trial. His lawyers say he has not been summoned for questioning. As a former head of state, he also enjoys immunity. But Bazie believes Compoare has simply wanted to avoid accountability for Sankara's death for decades.

"Sankara's father always said he's waiting Compaore to pay him a visit and tell him exactly what happened that day," Bazie said. "He's long dead now. But Compaore never made that visit."

In the Ouagadougou suburb of Wayalghin, where the citizens rights movement Balai Citoyen is headquartered, the trial is eagerly anticipated.

"It would be better of course if Compaore were here to face the justice system of his country," Eric Ismael Kinda, spokesperson for Balair Citoyen, said of Compaore's absence.

"He fled and has no trust in the system he is largely responsible for," Kinda said.

That the trial is taking place at all is mostly thanks to Burkinabe civil society, said Canada-based political scientist Aziz Salmone Fall, who coordinates the international Justice for Thomas Sankara campaign.

Weeks of demonstrations in October 2014 toppled Compaore's rule, and forced him to step down. Under the transitional government of Michel Kafando, Sankara's body was exhumed and the government launched an investigation. Among other things, a military doctor certified that the body was "riddled with bullets." Previously, Sankara was said to have died of "natural causes."

Fall does not want to participate in the trial in protest of Compaore's no-show. But he also believes the role of France, Burkina Faso's former colonial power, needs to be fully investigated. Only in 2017 did President Emmanuel Macron declassify all French documents regarding the death of Sankara.

"I don't think it was merely a locally conceived plot. It was international. The last revolution on the African continent ended with Sankara's death," said Fall.

Sankara is revered for his modesty by admirers. His vision for Burkina Faso included the country's producing its own goods and becoming self-reliant. Sankara was also a thorn in the side for many who did not want to see an independent African state succeed.

In Ouagadougou, Sankara is still a hero for young people.

"He fought against the forces that undermine society, like corruption, injustice, unemployment, illiteracy, poverty. We know the youth are particularly hit by poverty," Kinda said.

No politician in Burkina Faso, or even Africa, has come so close to the heroic aura that Sankara has had domestically since his death.

Back at the memorial to Thomas Sankara, Justin Sogbedji thought about the leaders who have followed. "No," he said, "I haven't seen anyone like him yet."